Holy crap, toddlers are dangerous. The other day when I was taking a shower, Harry ate some of my Lancome Renergie cream-- not much judging from the amount smeared on the walls and the counter top. What really freaked me out was the open tube of toothpaste on the counter next to my violated face cream because that stuff will kill you, you know. I nervously smelled his breath, but it wasn't minty fresh, just really expensive and wrinkle free.

Or I can just stop taking a shower. And blinking,

Here's Harry climbing on the toilet, which may be his favorite thing to scale. He likes nothing more than to throw tissues one by one onto the floor and then yell uh-oh and scramble down to pick them up, so he can climb back up and try to put them back, screaming in, in. He usually falls off and hits his head a few times in the process.

Notice he brought his own beverage. Yummy. Nothing more appetizing than milk in the bathroom. Unless it's a plate of freaking chicken wings (Harry's Uncle Ben, you know who you are). 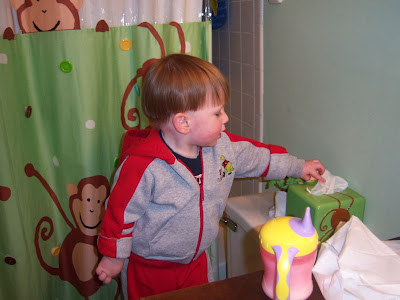 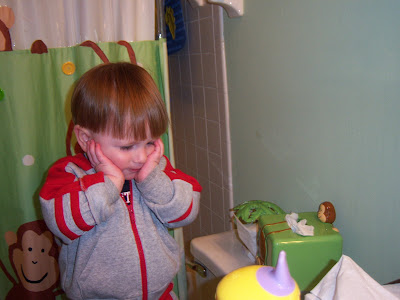 On a side note, we voted today (Go Hillary! And how cool was it to vote for a woman for president? Super cool, and I hope I can do it again in November) and Harry was so bummed because he thought we said we were going to boat. He was totally pissed when we got to our polling place (an elementary school with a black history month display that prominently featured Obama and was RIGHT NEXT TO the voter registration table) and discovered there wasn't even any water, let alone a boat.
Posted by Sarah at 8:39 AM

You left out the part how Harry was canvassing for Obama at the polling place. See I have been working with him for days to say Obama. Every night in the bath tub we work on it. It sounds very similar to mama..."Harry, can you say Obama...O-BA-MA" I say to him loudly and slowly as if he is not from this country or elderly. He looks at me with a stale look like, yeah dad I've been saying that for months "Mama". So I told him this morning when I was getting him out of the car to go "boat" to tell everyone he sees to vote O-BA-MA. So in between cries of utter boredem he would look at random people...mostly the polling workers and faintly cry "Mama" "Boat, Mama".

And don't complain Sarah, your just pissed that it's Women's History Month too (ahh February, the politically incorrect two-fer) and there were no displays for that...at least you got to vote though, right?

so glad Harry is developng like a normal boy (Isn't it exciting), and our kids always thought we we going to "boat" also..glad you vote like Bomma, Sarah, my Hillary sign is still in the front yard with about 8 inches of snow around it.

yeah, I found Ethan standing on top of his IKEA table today as I walked back into the living room after getting him a snack. I am apparently going to have to tether him to me to ensure he doesn't get into trouble...

That is scary! You've read about our climbing adventures. I'm sure it is only going to get worse.

I LOVE the face grabbing consternation when he can't put the tissues back in the box.
"Boat Mama" is also really good. I am sure Senator Mama would appreciate it! Now if only one of the candidates would propose a single payer health care plan I would be happy.