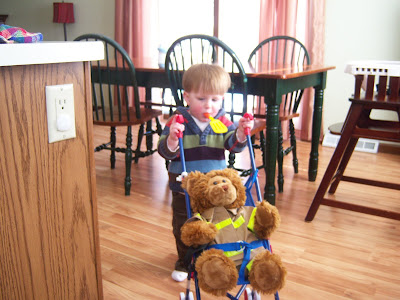 My second year in PhD school (not to be confused with MA school), I took a class in the sociology department that was cross listed with my minor, women's studies. The class was labeled something very general and engaging like "Gender and Social Institutions" or something of that nature. On the first day, we found out the special topic of the course was Care Work. I had never heard of such an area of study, and I was very intrigued.

It turned out to be a great class-- all about mothering, nursing, elder care, and the idea that the work of care often falls to women, is usually privatized and is almost always devalued, emotionally, fiscally, socially-- anyway it can be, actually. I got turned onto a great body of literature I had never encountered, finally read the kinds of philosophers I wanted to be tested on for prelims (Tronto, Nussbaum, and others whose names escape me because it has been years since I took my prelims- specifically 2 years), and was finally able to articulate the links between mothering and abortion, between the language of reproductive rights and hegemonic discourses of sexuality and marriage, and between Planned Parenthood and family values that drew me to study the organization in the first place.

Unfortunately, that class was also my least positive foray into women's studies ever. The other women in the class (and the professor) looked at my Ann Taylor wardrobe (that's where I worked the previous summer-- a job that cost me a lot of money, by the way) and my new diamond solitaire and wrote me off as someone who wasn't a serious student. I have run into this attitude before (probably because I only use purple pens and like to twirl my hair) in my own department (like the time in seminar when I made what I thought was a brilliant comparison to the "Greek system" and realized that everyone else thought I must be referring to the polis of ancient Athens, not my days as an undergrad in Chi Omega), but at least my professors waited to read my work before like totally judging me. This class? Not so much. And sure I probably should not have brought my ginormous beribboned wedding planner notebook to class, but I liked to multi-task on breaks. And call me a second wave throw back, but seriously? Isn't women's studies a place where we should just support each other and our choices? And Legally Blonde? Did we learn nothing from Elle Woods?

Anywhoo, clearly I still need some therapy about this topic. My point in considering care work is that one really practical thing I learned from that class is that women are socialized to care more (and not in a creepy Nancy Chodorow essentialist kind of way) than men are, and this starts in the womb practically. I realized that I wanted all my future kids to learn an ethic of care because what's a more important founding principle for our lives together on this planet (and yes, I support universal health care and the Kyoto protocol)? Dismissing the care ethic has made us a nation of freaking assholes (my scholarly assessment) and is why WE DON'T HAVE UNIVERSAL DAYCARE, maternity leave that LETS WOMEN HAVE ENOUGH TIME OFF TO BREASTFEED, and corporate environments THAT GIVE A SHIT ABOUT CHILDREN. That's why most women have patchwork childcare, have to put in a second shift of house work and feeding the family when they come home from their 9-5, or are forced to make some sort of Sophie's choice between marriage and family and career. (I told you this was ranty).

So that's why I bought this for Harry today 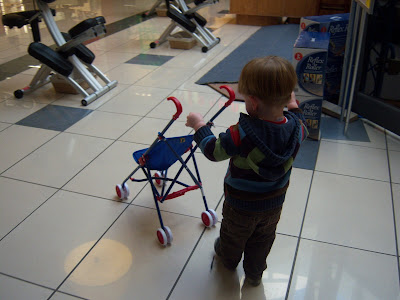 Also because he wanted it, I hate public tantrums, and it was one of the least expensive things he could have picked at Build-A-Bear, where he ran when I freed him from his stroller at Gymboree so he could watch Gymboree TV and I could look for this shirt in his size (which I did not find which is too bad because he really does love dirt). 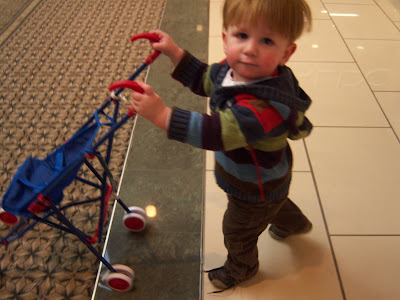 The we came home, and he thought his fire fighter bear might want some bup. He also washed the bear's face, but I was too slow to catch it on film. 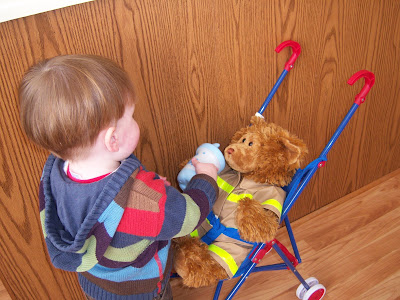 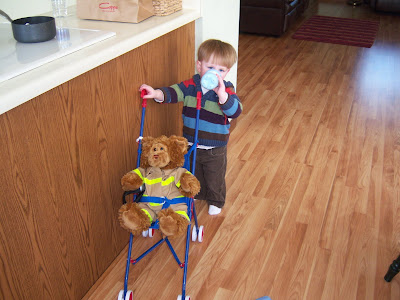 I think I am just annoyed because the woman who worked at Build a Bear was all "My husband would never let me get something like that for my son," to me, and she said to Harry, "You better hide that from Daddy," at which Harry looked really confused. I assured him that no Daddy would like the stroller, it was all the crap that Mommy bought herself that Daddy might not be too hapy to see...
Also, I took all the rest of my minor classes (also cross listed with womens studies) in the history of medicine/ bioethics department, and I loved them.
Posted by Sarah at 1:58 PM

This was a great post! I find what you are studying so interesting and I can tell you are really passionate about it!

I told Ryan I was going to buy Charlie a doll when we have our second baby so he can take care of "his baby" while I take care of the real baby. He thought it was a great idea!

I can't believe the woman at Build a Bear said that! What century did she grow up in? I think the biggest influence on kids is the stuff they see at home, and Harry sees his Daddy as a nurturer, too. I mean, Ben pushes the stroller and takes care of Harry, too, Harry is being a Daddy to the bear.
It certainly makes sense to me!

Sarah, I want to rant right along with you. I am continually irritated by the nosey, ill-informed people I meet out in the world who assume that I ame either and uncaring mother (since I work) or that my husband is ultra progressive because he takes a day off here and there to care for OUR child.

And yes it is also sad that I was jealous of all the French people in Sicko...because they had someone to come to the house and help the mother achieve normalcy after birth (well, and daycare didn't present a neverending crisis of budget and mind)

But, mainly I wrote to share this article that I enjoyed reading: Columbia Journalism Review Mar/Apr2007, Vol. 45 Issue 6, p51-54 It points out the whole Opt out/Pushed out thing...

Have you seen my son's pink and purple stroller? He enjoys giving stroller rides to a variety of spice bottles from our spice rack. And that's nice, right? Because sometimes a spice bottle wants to hang out under the couch for awhile, right?

And seriously, who were those women? And how much therapy do their kids need??!!

Been reading you for a while now thru Sarah's blog, first time to comment.

While I am not a mom, I have always found it interesting how we as women feel it's our "right" to judge other women in how they raise their child(ren). Didn't their mothers tell them that if they didn't have anything nice to say not to say anything at all?!

Beautifully written Sarah!!! I don't have time to read your blog often, but when I do I am always inspired and entertained!! I can totally relate to your experience in that class. I am having the exact same experience in a government class this semester! Thanks for making my office hours less boring!! :)