Harry got a hair cut last weekend, which he really needed. Ben took him to Costcutters because we forgot to make an appointment at the kiddie place we usually frequent.(Really? An appointment? Thy don't even use pointy scissors!) As you can see, Costcutters has a perfectly adequate vroom vroom and a TV, so Harry was a happy camper.

Ben had to clean up the edges and the back with his electric razor (a process Harry totally and completely loved), but otherwise, not so shabby. 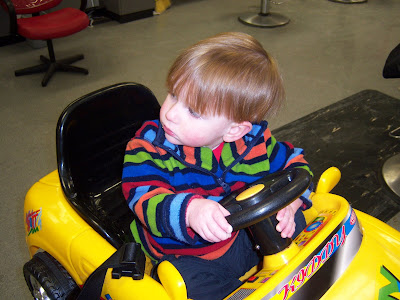 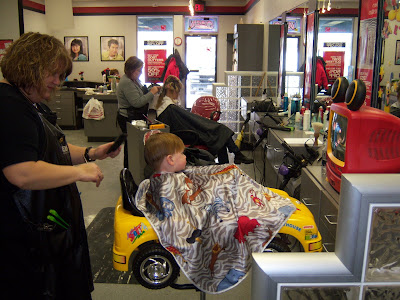 Afterwards, Ben and Harry came to visit me at the coffee shop where I was working. I was there for like 4 hours, and all I did was figure out a title for my chapter and find a quotation for my epigraph. Awesome. I also read through all my research and spent a lot of time cradling my head in my hands moaning a little. There was this table of loud women who were the most annoying things I have ever encountered in public. At first, I thought they were unfortunate looking high school students because I figured adults would be better behaved, but then one of them shrieked and cackled that she was 31, and I was horrified. I didn't ask them to be quiet-- just got all passive aggressive and sighed and started at them and huffed and puffed. After they finally left (and they got their money out of their free refills, I might add), a bundled up woman came in, stripped off her outerwear and her SNOW PANTS and then took off her shoes and socks and curled up barefoot with her crusty winter feet on a plush chair. That's when I left and went to the gym. 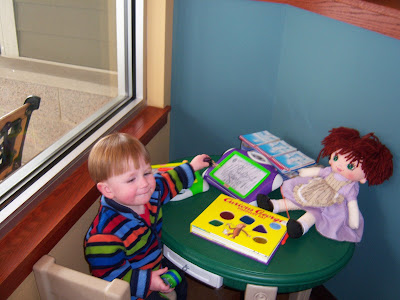 But it's not Harry's hair that's a disaster. It's mine. I have made like 3 hair appointments and cancelled them. The first 2 for legitimate scheduling concerns (because it is a PITA to get a hair cut when you are the primary caregiver of a toddler who is not really a good guest to bring to the salon), but I cancelled this last one because I figured screw it. I have come this far-- all this long, split endy, scraggly, shaggy way-- and I am just going to hold out until spring break. I want to grow my hair out anyway, and I think I want to go from these Suzanne Somers Three's Company bangs to my old side-swept stand-by bangs. If I get a haircut now in February, I won't really need one by mid-April (before McLovin shows up), and who knows when I'll be able to venture out alone after McLovin joins the fam (Because I am not pumping this time around. I hated pumping. Just me and my boobs, baby, which means I'll never ever be apart from the baby, not even for a haircut, unless he could hang out under the cape, and I think that might be a little suffocate-y). So, I'm going to go with this ridiculous mop until the end of March. Gulp. 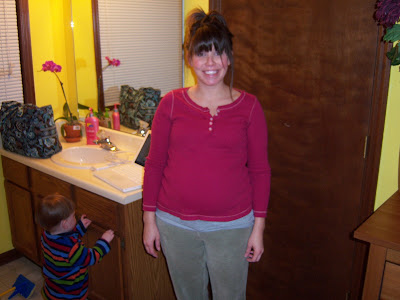 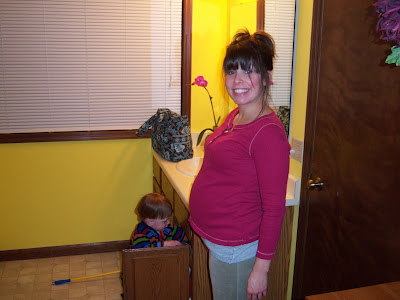 And this is what Harry was doing while we took these pictures. Hmmm... I wonder what he's doing now. 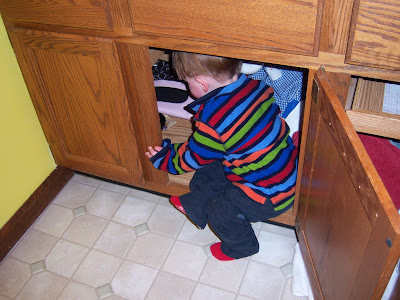 Harry looks cute. I took Charlie with me to a fancy salon once. The head and shoulder rub was not nearly relaxing and they didn't offer me a cup of tea like they normally do. I'd wait too.

Sarah, besides having that darling little son, you look so cute pregnant, and you have always have had such a way with hair that you could have a long braid down your back..Bomma

Totally spit my water across the room at your Suzanne Sommers hair comparison. Too funny!

You look great! I think you should go Suzanne Sommers all the way! You could put the sides in 2 little pony tails on the top of your head, and then comb the back down.
You don't look like you have gained much weight at all.

You look great! I think you should go Suzanne Sommers all the way! You could put the sides in 2 little pony tails on the top of your head, and then comb the back down.
You don't look like you have gained much weight at all.