Oh my gosh-- the day we have had around here!

This morning, Harry and I went to the park, and I was taking some pictures like usual, and my freaking camera froze-- like froze-- with the lens all extended and the flash light flashing and evrything. It stayed like that ALL morning. I, of course, was running wayyyyyy late (surprise!), so I couldn't take it to Best Buy (thank god for the protection plan or whatever the hell it's called) until after class.

Well, before class while Harry napped, I was sitting on the couch looking at double strollers online (okay, if money were no object, I'd get the Peg Perego Duette MT or the Inglesina Biposto Domino Twin; on a slightly more realistic note, I like the BOB Revolution Duallie and the Phil and Teds e3 Double; probably I'll get the Graco Quattro Tour in either Metropolitan or French Toast with the matching Snugride infant seat, but that's another post for another day), when Harry's babysitter rang the doorbell. Since Harry was napping, I leapt from the couch to answer the door (okay, I don't know why I had to be so dramatic-- it's not like she was going to keep ringing the bell until I got there). I tripped over my bag and my computer flew out of my arms, hit the wall (and left a big dent), and fell straight onto the floor with kind of a yucky thud (not watermelon-ish yucky like the kid who fell off the side of the high dive onto the cement one summer at the pool, but yucky in a oh-shit-that's-going-to-be-expensive kind of way).

Naturally, I was like oh shit, but I have dropped the poor old thing before, and I'd already broken (or witnessed the breaking of) one favorite electronic today, so I scooped it up and went on my merry way. OF COURSE it was totally and completetly broken, and OF COURSE I haven't saved any photos and stuff since last time my computer broke, last semester. Oh and OF COURSE all the crap I've been grading this whole week is gone, and I have to start from scratch.

But the real issue is that my computer broke, and I had to buy a new one. I was completely unimpressed with the service at the Apple store. And the guys at the Genius Bar? Not so genius. So, I went to Best Buy, bad mouthed the not so geniuses and got a pretty little Macbook. Here it is next to my sad old Powerbook: 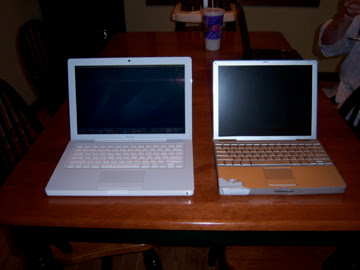 And clearly, my camera is working just fine. As soon as I got to the Geek Squad, it turned right on, the little bastard. Or, maybe those geeks are the real geniuses.

So, I have cute pics of Harry, but I can't find them at the moment-- not exactly sure where they went on this newfangled machine. Gimmee a day or two.

Also, just spent the last 2 hours and the rest of my sanity trying to install my pain-in-the-ass Samsung printer and could not find any drivers, even off the Samsung Australie website (don't ask) and even from GimpPrint (ha!). So unless anyone has advice, I think we're getting a new one, since it won't work with Ben's Vista anyway...

Hey, guess what was in the disk drive of my old computer? All of the negatives from Portrait Innovations. That's cool, though, because guess what was on the hard drive? Everything I learned in grad school. Which, clearly, did not include the helpful nugget BACK UP YOUR FILES, ASSHOLE.
Posted by Sarah at 8:58 PM

Oh my goodness! That is a bad bad day! Ryan made me a special CD with my name on it and encouraged me to back up my laptop because, I don't know, maybe it makes him nervous watching me carry Charlie, the diaper bag, my purse, AND my laptop up and down three flights of concrete stairs every day?

Hello, did watching Sex and the City Season 4 teach you nothing? The episode I am of course referring to is "My Motherboard Myself." Carrie loses all of her writing all of it. Tragically she does not have a geek squad or nerd guru who can get everything but Fiona Apple back. So, seriously things you need to remember from Sex and the City, put that in your next blog.