The other evening, we took a family fun trip to Target in the late afternoon because Harry's Diaper Genie magically stopped containing the aroma of Harry's diapers, and we like nothing better than to kill time wandering around Target. Even though it was much later than his usual naptime, Harry, who didn't nap very well that day, fell sound asleep in the car on the way home (with a new Genie and about million other things, including a Bonnie Bell Dr. Pepper Lipsmacker, which is awesomer than I remember it, crammed in the seat next to him-- god we need a bigger car to hold all our crap), and we put him in his bed, jacket and all. 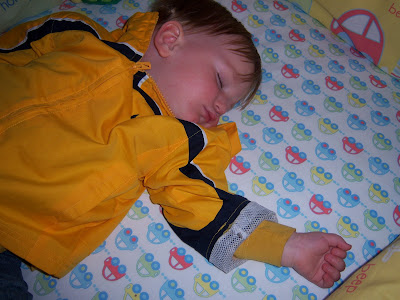 Soon, we realized that a dinner time nap was a dumbass idea, so we tried to wake him up. He was so sleepy that even this didn't disturb him (note that I have at least 4 gumballs in my mouth in this picture. I have a gum problem, for sure. 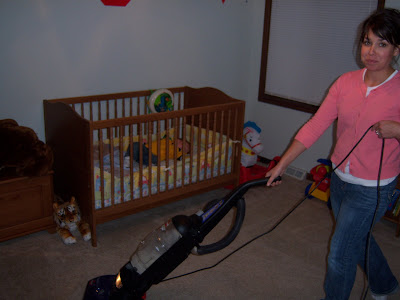 Whe we finally roused him, by fake sleeping and snoring really loud on his floor, he was happy to see-- he jumped up and toddled over to the side of his crib-- then he tripped and hit his lip on the rails. Blood, tears, yelling. We tried to comfort him, but he would just back away from us saying "No no no" and waving his hands in our faces. He'd calm down for a minute, start to leaf through a book or slap at a toy, and we'd try to engage him, which would make him sob "no no no" and back away again.

Finally, he had to take moment and collect himself with his doggy. 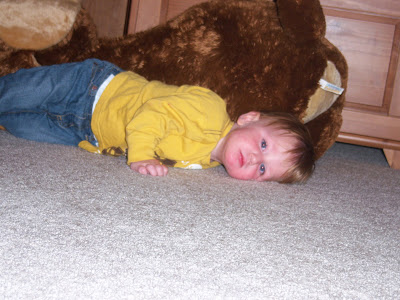 Look at his blotchy little face and blood moustache-- so sad. 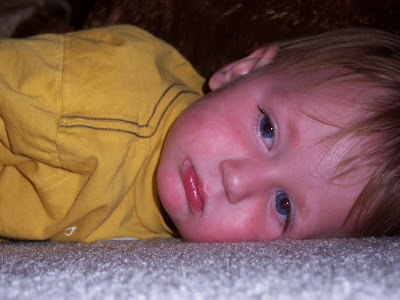 Both Ben and I rage when we get hurt. Ben's first reaction is to get pissed at anyone in the room, like our presence caused him to bump his head or whack his funny bone. Thn he tries to add injury to injury by punching something. I take the much more mature rout and yell expletives that are sometimes, not always, directed at others. Hmmmm, I wonder where Harry learned his coping skills?
Posted by Sarah at 8:46 PM

glad to hear from you and sorry to hear about the injury,,,oh, those little teeth are like razors..he may have a fat lip several more times...love his personality..fits right into his extended family, (us). Bomma

You are me with the yelling of explitives. What a sweet story. Charlie's little mini-tantrums, which still consist of sippy cup throwing and arm flailing, still make me laugh.

this is one of my favorite entries ever. I don't know what I love more--the bonnebelle reference or the picture of Harry sleeping through you vacuuming next to his head.