I should thank Sarah for the idea for this post, although she seems much calmer about the whole thing than I am.

Okay, seriously. PRESCHOOL? I thought he was a friggin' BABY. Plus, I thought the term "preschool" had become really watered down, since infant daycare programs try to pass themselves off as schools-- and I am pretty sure that schools have more curricula and less cribs.

So, I have been totally like Diane Keaton in Baby Boom (with smaller shoulder pads) just playing with my baby in the park, blissfully unaware that all the other mommies hve enrolled their kids in enrichment classes. Except we do take a mommy and me class! And I am not moving to Vermont to can apples.
(Here we are playing at the park) 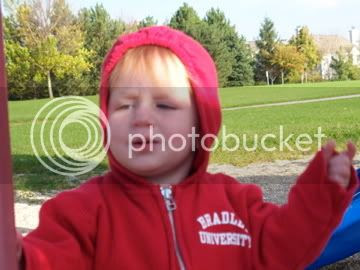 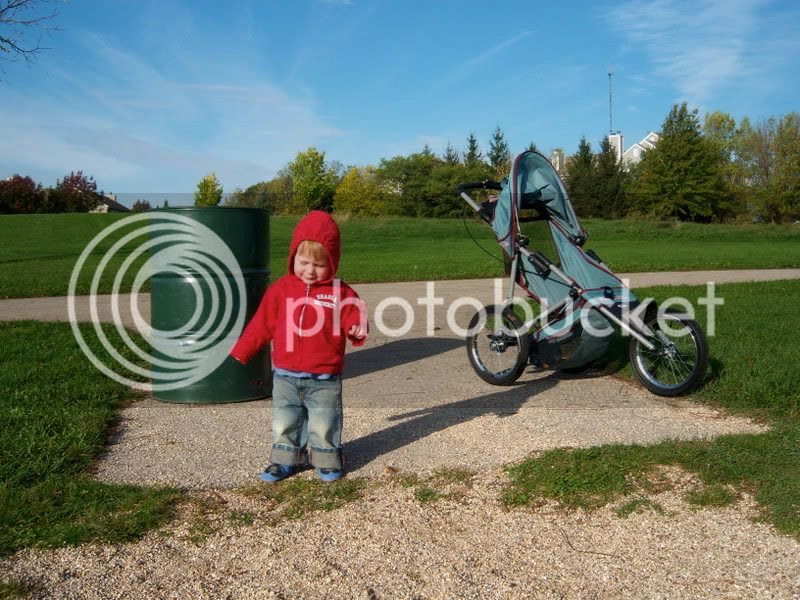 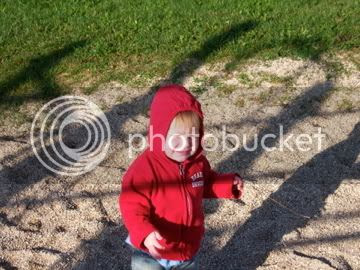 Imagine my surprise after class on Thursday at Little Gym when all the mommies in the lobby started discussing preschool waiting lists as we struggled to put our kiddies' shoes and socks back on and tried to prevent the little buggers from trading sippy cups with reckless abandon. I listened for a minute, growing increasingly horrified as I realized we were the only ones not on the waiting list for THE ONLY GOOD PRESCHOOL IN TOWN. One mom claimed to have called the school a half an hour after the list openend (weeks ago! weeks, I tell you! why didn't I know?) only to be told she didn't have a chance of getting a spot for next year. Which means Harry's gonna end up in some dank church basement thinking half of his family is going to hell and that dinosaurs and cavemen roamed the earth together a couple thousand years ago. And eating paste (which, let's face it, he would also do at THE ONLY GOOD PRESCHOOL IN TOWN).

I tried to cover up my mounting hysteria by kissing Harry's chubby cheeks and saying, "But he's only a baby-- is it really time to think about school?"

The lobby fell silent. Even the babies started at me, slackjawed, their pacifiers falling to the ground with sticky, muffled thuds.

"Aren't you having another one?" a mom asked me, referring to my offspring with the same derision Oliver Wendell Holmes reserved for his Buck v. Bell opinion, concerned, no doubt for the educational wellbeing of my fetus, since it is probably too late for my ignorant toddler, who clearly needs some schooling snce he calls bubbles hot, using, without discrimination, the only adjective he possesses. "You'll surely want him in a program before that happens."

I smiled and nodded, rescuing the Dora sippy cup from Harry's fingers seconds before it made contact with his lips and giving it back to its green-snot-encrusted owner.

What kind of program?

I called Ben and relayed the whole story. He says I am not handing stress well these days and thinks we may be having a girl.
Posted by Sarah at 1:25 PM

So you aren't going to send Harry to the basement of the Herget House??? Just kidding! But seriously, I am not a mom but preschool sounds so overrated. My sister-in-law just spent months to get our nephew into the "best" preschool (which had a hefty price tag as well) just to find out that they watch DVDs all the time and the nephew picked up a bunch of bad habits from the older kids. They sent him back to the Mommy's Morning Out in the church basement and he was much happier!

I get the whole "but he's a baby!" thing. Especially now that he is in the toddler room. The teachers laugh at me when I bring him yogurt for lunch because my leetle beetle smushykins can't eat ravioli alll byyy himself!

That's so funny! I love the image of all the mommies and the kids staring at you with their mouths perfect O's of shock! He isn't even 2 yet!!!!! Although, when Katie B. came home with the "Evolution's falling down," song to the tune of "London Bridge," her parents were a bit surprised! I can't see Harry learning anything at preschool he wouldn't learn at home (except maybe eating boogers, or something)

Bell v Buck made me bark! This is sooo reminiscent of not getting Mol into the ‘only school’ which required camping out on wait list day like kids for great concert tickets. I felt like such a slacker and a bit abusive!

Who knew they should have been on a preschool waiting lists when they were still floating in amniotic fluid!