We are on our way to story time at Borders for the second week in a row, although last week was NOT a success. Harry was overcome by the excitement of hanging out with all the big kids, and he kept running up to kids sitting happily with their sippy cups and snack baggies, crouching in their faces, and saying, "Aughhhh!" at the top of his lungs. Harry was the youngest by about 18 months. (Excpet for Josephine, who was excessivley well behaved, grumble grumble.)

We're trying again because Borders has a good kids' section, and he can run around there, at the very least.

I actually think the story of the wet dog that the story lady read last week was not sophisticated enough for Harrison, who has slightly more academic tastes.

Case in point, this book theft: 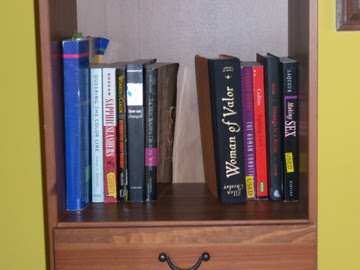 Harry always says before you join the ranks of all those who interpret Plato as entirely dismissive of rhetoric as a mere craft, consider giving the Gorgias a closer read-- line by line, perhaps. 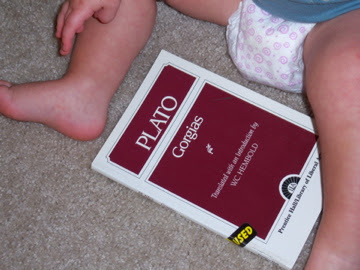 Also, Audre was right-- the master's tools can never dismantle the mater's house. The Melissa & Doug tool bench, however, can be used to beat the crap out of an IKEA desk, in case you were wondering. 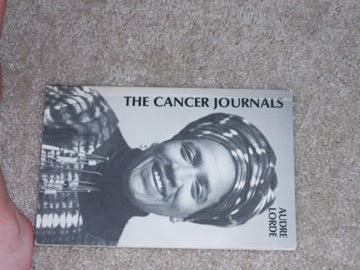 Ben here...sorry if my "crazy person" rant (thats me...the crazy person)was taken out of context yesterday. It was intended to be funny. However, I am beginning to find that what I find to be funny is often found by others to be blatantly not funny...rather weird or crass...but typically not funny. Except for Harry, who usually finds me HYSTERICAL...He is after all, my prime comedic demographic.

I talked to Bomma today, and she did think it was funny, actually. She also said that she is SOOOOOOOO jealous that both sets of grandparents live closer to Harry than she does, that she is looking forward to Thanksgiving, and that she thinks Harry looks exactly like your mom through the eyes and forehead, as evidenced by that picture of the three of them. I think that covers it, right, Ma?