I remember writing this post last November when Harry finally developed a routine of sorts and started taking a regularly scheduled morning nap.

Well, 10 months later, he has dropped that nap completely. So sad. Wednesday, he was really sleepy at 9 am, so he slept for an hour like old times, but then his afternoon nap was short and restless. Most days, he lasts all the way until 1:00 without so much as an eye rub, while I am practically asleep standing up (or typing or playing Little People Farm massacre, whatever, you get the idea).

Last week, I had the brilliant idea of taking him to the park in the early morning, thinking it would wear him out and make him sleepy. No dice, but some cute pictures. 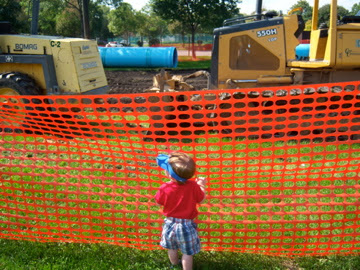 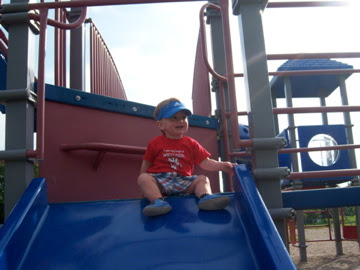 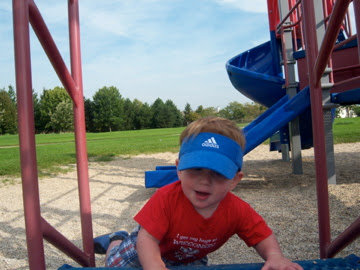 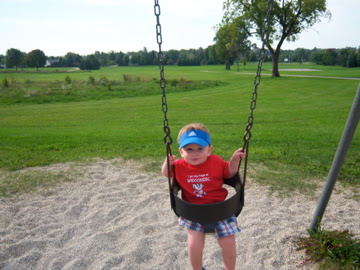 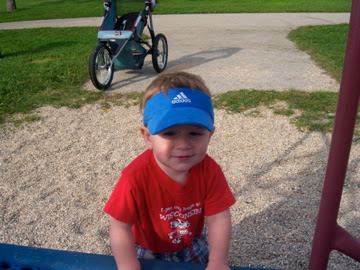 We're sad to see the nap go-- I may never shower again, for example, but we've always been really big on letting Harry do his own thing. Not like Adam Sandler in Big Daddy or anything crazy like that, but we've never tried to enforce a schedule that was only convenient for us when it came to feeding and sleeping. Instead, we followed his cues. Sure, we've had the same nighttime routine since he was 5 months old, but he only started sleeping through the night two months ago. When he was teeny, all I did was nurse him-- for days on end it seemed, but eventually, he regulated himself into breakfast, lunch, dinner, and a few snacks. The dropped nap is just something he's ready to do, and while it totally screws me over, that's okay-- that's what being a mom is about, right? Never showering. I hope we can let Baby #2 set his/her own pace, too. I think to some extent, the nature of the breastfeeding relationship makes this happen and leads to a more attachment parenting kind of philosophy just out of neccessity. There are some antifeminist implications of Dr. Sears' brand of APing, I would argue, but that's a whole other argument (and-- if I ever finish my current work-- might be the subject of my next book).

Anyway, napping, Much less of it going on here.
Posted by Sarah at 7:29 AM

thank you for my morning fix and philosophy too...Bomma

Nooooo! Reading about Harry's development is like a glimpse into our future. Walking was fun. "Thissss" was fun. No morning nap is NOT FUN.

And I agree that Dr. Sears version of AP doesn't leave much (any) room for self. I'm lucky I have a baby for whom "nursing on demand" meant "every three hours like clockwork."

We're picking apples this afternoon. Thanks for the great idea!

I always thought you guys just kind of made a schedule. When you asked about scheduling the baby when H was teeny, I was at a loss, "Schedule him, is he busy?" It was a little disconcerting. But now I get it. Sorry about the morning nap....

So cute! I hear on losing that nap, though. It's turned out to be nice in terms of having more time for fun activities during the day, but I do miss that bit of quiet time in the morning.

I hadn't ever thought of Dr Sears being anti-feminist, but i can definitely see that. I sometimes think maternal instincts just naturally go against the feminist movement since it has focused on creating an equality with men, and motherhood, in a lot of ways, defies that comparison. I don't know if that makes sense?!