100 Posts. I'd Like To Mark This Momentous Occasion by Thanking My Overwhelming Sense of Self Importance

Oh! And Harry was 11 months old yesterday. Acutally, these last couple of days have been almost big birthdays for both of us. I turned 29 on Sunday. 29. I would only be 27 this year if Ben had gone along with my plan to be 24 and 26 twice. Jerkface.
Here's the Bear on his big day 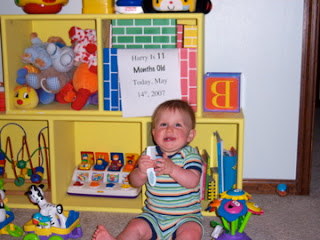 Here's the last picture of 28. I am clearly practicing the good skincare routine that makes me look so young. That's funny, see, because I am looking really old these days. The only thing that saves me is my fat face. I knew these cheeks would come in handy for something besides storing food for winter. And by winter, I mean dessert. 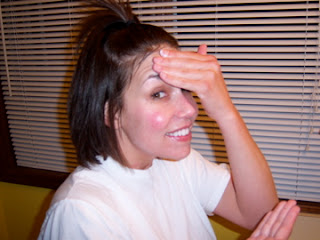 Ben baked me a cake that did not look like dog crap . It was delicious. He also made chocolate chip pancakes for breakfast. What? How is it that I have never had these before? They're cookies that you can put butter and syrup on. Hello? Now if they had little bits of bacon in them, I could save time on side dishes. Then , before he dropped me off for my spa pedicure at this place , he made a quick pepperoni pizza. When I got home from the spa, we watched Family Ties on DVD for awhile, and then Ben made filets, shrimp cocktails, baked potoatoes, and iceberg wedge salads. Pretty freaking awesome. Oh, and I got a gob of gift certificates for my b-day/mothers day. And Godiva truffles from Harry, which he gave me even though he knew I'd eat them all and give him a stomach ache. There you go. That's my "How I Spent the First Day of the Last Year of My Youth" essay. 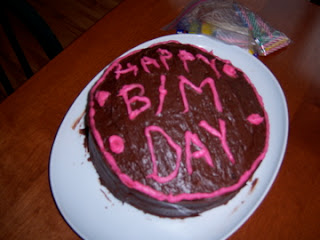 On a totally unrelated note, Harry loves his blowdrying brush and makeup kit. 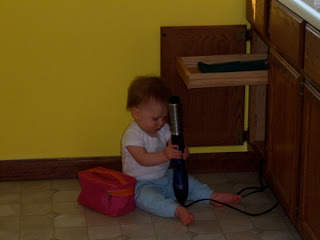 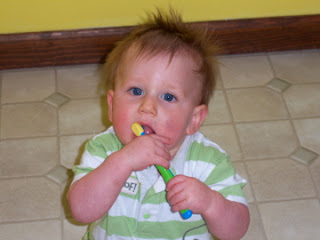 and folding the laundry 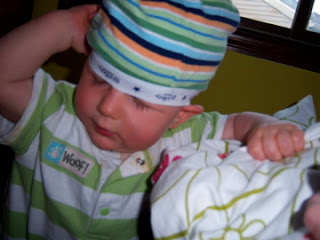 and trying to shake the lamp off of our night stand. 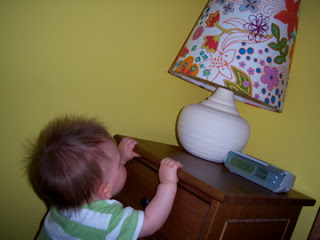 He is still not sure, however, how he feels about the grass, 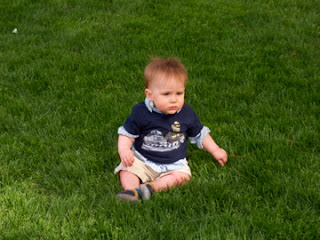 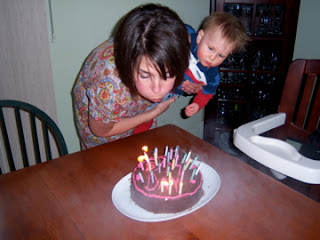 Spekaing of Harry, he's trying to lick the opening where the central vac attaches in his room, so I gotta go "parent" and "interact." Speaking of that! We've been having sleep issues so bad lately; he's been waking up at 9 and wanting to sleep with us all night long and tossing and turning, and none of us has been sleeping well. We've given him Motrin and Tylenol. Yesterday, we decided to do cry-it-out, and we got ourselves all psyched up for it. Then we noticed it was chilly in his room, and we put a sleep sack on him for the first time in like 6 weeks ( 6 weeks? Why isn't that the exact amount of time you've been having these issues?) and he slept from 7-4am without a peep. He had a snack at 4, and then he slept without a sigh or a squirm until 7. Oh. You have to cover them up?
Posted by Sarah at 8:30 AM

what a wonderful way to start my laundry and ironing day...Harry and Sarah, both in pictures...love...Bomma

I just love the idea of Harry reading this blog someday and seeing his first year so well documented. He will LOVE IT