Have you ever felt like maybe you are raising kids who aren't as, um, resilient as you thought they were?

Like grit and growth mindset,"resilient" is a parenting buzzword and one that relies on access to a certain class status but is passed off as something we should all be able to attain if we just worked hard enough. It's this exact reason that I don't pay attention to these parenting buzzwords.  Or at least, I say I don't pay attention  to them but really I check them silently against my own kids.  (Can they stick with  hard task?  Well, sort of, if you take into account the fact that nothing in their little lives is actually hard.  Do they have a growth mindset?  I mean, you guys, they live in a child-centered bubble that offers them sixty-five billion chances to do the same task and get better at it.  THE GROWTH MINDSET HAS BEEN PROVIDED).

I always assumed they were as resilient as the next special freaking snowflake whose parents' entire lives revolved around their happiness and the nurturing of their potential.

Until, that is, we replaced our basement couch and all hell broke loose.

THE KIDS HAVE BEEN MOURNING THE OLD COUCH FOR WEEKS.  Like, rending of garments mourning.  Ben wanted to save a grimy old cushion for them because he is a better person than I am and remembers being beyond sad when his parents sold his childhood home, but not me.  WHERE WOULD WE PUT A NASTY OLD COUCH CUSHION?  Why should we condemn our couch to the trash heap if someone wants it for their own basement?  WHY ARE WE CRYING ABOUT A COUCH?

WHAT THE ACTUAL HECK?

The old couch was 8 and should have been kicked to the curb at 4-and-a-half, after three kids poured sippy cups of milk on it and left food in it (we found those baby puff things that no one has eaten for at least 4 years in the bottom of it when Ben sliced open the fabric to let all of the crumbs out like it was a big plush toaster).

The kids say they had favorite spots.  No couch would be just like the old one.  They liked kicking each other in the face and fighting about who would sit in the corner.

After school yesterday, Jack sat on the new couch and SOBBED because it wasn't the same.

To help them cope, I bought pillows and a basket of throw blankets so everyone would be extra cozy and just sort of threw up my hands.  I hope they will all bond with the new couch, and since watching screens with their mouths open is everyone's favorite way to spend time as a family, I think the odds are pretty good.

Also, Ben and I are patting each other on the back pretty aggressively because we put function over form when we got these (SUPER COMFY) fake suede little numbers that are probably off-gassing something toxic but have really comfortable pillowy arms (like me!) and we swear that when the 5-year protection plan lapses, we will get new ones but we all know these couches will be here for the next decade no matter how much teenage boy funk they soak up.  Unless Jack takes them to college. 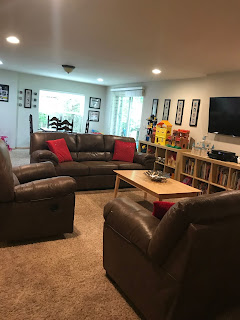 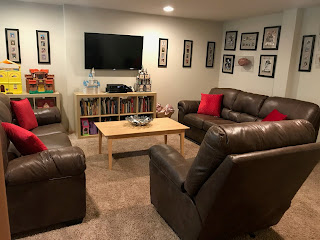 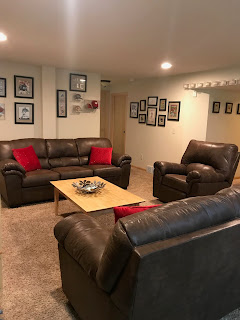 (And actually, I do of course think this is may be not about the couch and more about being freaked out by change after losing their grandpa.  I know my dad's death is always on their minds.  We played a special game of rose, bud, thorn on Cooper's bday eve (we play that game every night at dinner after I read about it in Family Circle because I am read-about-dinner-table-conversation-starters-in-my-magazine-that-advertises-paper-panties-for-bladder-leaks year old) and asked him to reflect on his whole year.  He said the worst thing that happened to him (his thorn) was that his iPad was glitchy.  All 3 other kids were like DUDE.  ALSO YOUR GRANDPA DIED. And we laughed and laughed.  Also, my dad totally made fun of how gross that old couch was.  FOR LITERAL YEARS.)
Posted by Sarah at 6:33 AM

I truly laughed out loud at this, because I am 30 years old and still have not forgiven my parents for getting rid of The White Chair when I was 8.

I kept a pillow from the couch my folks tossed when I was nine, and I’ve always been pretty resilient. I think they’re okay. And FWIW, my kids seem to have a hard time emoting over my dad (I think they’re trying to be protective) so maybe the emotional expression is really a catharsis they were holding back?
Academically, I’m curious why you say that resilience relies on class status?

I was SO SAD when my grandparents got a new recliner. I think I'm reasonably resilient now, 30 years on.