Teething has ruined Cooper's LIFE.  It's the worst thing that has ever happened to him, and to be totally honest, he is not handling the stress well at all.  The baby FKA Happiest in the World is now the saddest baby ever.  Nothing makes him happy except sometimes biting on a plastic cup, but eventually he gets mad because there's nothing in the cup to drink, and all hell breaks loose again.

Solid foods make him so irate he can't stand it.  He bashes his head into the high chair and screams for minutes after we take him out-- that's how mad he is that we had the balls to offer him blobs of banana and shreds of waffle while we thought about spooning oatmeal and fruit into his cry hole. AS freaking IF.  He will usually deign to eat a YoBaby yogurt for dinner, but never a peach one. NEVER! A! PEACH! ONE! YOU! IDIOTS!

Even nursing pisses him off, but he grudgingly shreds my nipples every couple of hours to pass the time.

I have stopped using the monitor at night because the sleep deprivation was getting to me.  So now when I go get him in the wee hours it's because he was good and mad.  Last night, he was sitting up smacking his crib soother with his palm at 4 am (but not the on/off switch, just the screen-- v. ineffectual).  Imagine his outrage when I changed his poopy pants (HATE), took his temperature (ALSO HATE), used saline drops in his stuffed up nose so he could both breathe and nurse (REALLY HATE), and gave him Tylenol (THE HATIEST).

He cried all morning but has been napping for an hour or so (thank goodness), and I get to leave to give a couple final exams in a little while, so say a prayer for Ben. 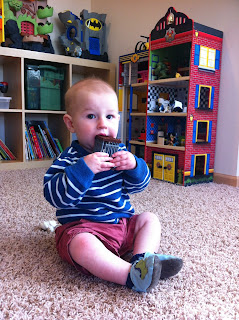 I wish you could see his 2 adorable bottom teeth and horribly inflamed gums in this picture, but his mouth is either closed tight or full of something chokey unless it is wide open in a scream of discontent.
Posted by Sarah at 9:58 AM

Teething is not awesome. I am pretty sure that is the reason for the schizophrenic behavior we've been getting from James McPissedOff.

Well that's just the saddest thing ever. For Cooper but also for you and Ben. Thinking good thoughts for you all!

I'm sorry; teething is the WORST!! Hopefully they pop up soon and he's back to being the happiest baby ever.