My job, which I love, doesn't always require my physical presence (mental presence, remote presence-- you bet), but when I have to be somewhere, I have to be there.  Which is how I came to miss both big boys' Vday parties today.  Ben and Cooper went to Jack's party, and Ben, Cooper, and Jack went to Harry's.  Ben even wore the Ergo and hooked toys to it and a pacifier to his own shirt so Cooper wouldn't drop it on the germy kindergarten floor. Then he rounded out his father-of-the-year submission reel with a trip to the PTO meeting because, you know, he chairs a committee.  He's the best.  He also made me swear I wasn't getting him anything but a card and secretly bought me the awesome bracelet I wanted from a sorority sister's Etsy shop (I emailed him the link a couple of weeks ago because I am subtle like that, but he scoffed at me and said he was not buying anything for VDay, so I totally fell for it and bought him nothing).

Tonight before bath, Harry said, "So, I guess nobody got a bow and arrow shot from that tiny fairy, huh?"

I blinked at him for a moment before it hit me-- Cupid!

He asked what would happen if Cupid shot him, and I told him he'd fall in love at first sight.  He blushed bright red and told me in a stream of giggles about the first grade girl two classrooms down from his that he thinks is beautiful.  He's kind of been stalking her since the first day of school.  Ha!

I didn't take any pictures of him because I suck, but Coop wore Harry's old first VDay outfit and got some Valentines for his baby book and a couple of hangy toys to bat at (he is totally a cat). 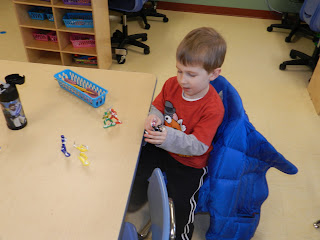 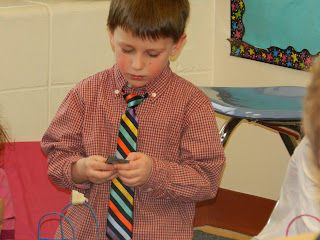 Ben IS super Dad! So awesome.

he is an awesome dad.

(I think you have a baby brain "typo" though - you said Halloween parties...)

Harry is such an adult in that necktie. I love it.

Awww, sounds like a great day for everyone! Love that tie! lol