I am in a marginally better mood today even though I spent most of the night sleeping with a hacking, feverish toddler. Poor Jack. Even though he said "Me freezing mama," when he barreled into bed at 12:26 am, I didn't even take his temperature until 1:49 because I am STUPID in the middle of the night. Only the way he was shivering and moaning next to me finally made me realize he was sick and not just totally annoying. After he had Tylenol, his fever broke around 3, and we slept until 7:20-ish, and I have been remarkably chipper considering my lack of sleep.

Tonight, I gave the boys a bath by flashlight which totally delighted them and stopped all bath fighting and splashing hijinks. They even made shadow puppets. I totally recommend "dark bath," as they called it, if you ever want to shake up your routine. 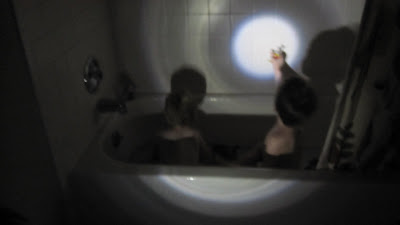 Jack has been cracking me up lately when I catch him playing. He is really into acting out scenarios with little figures from multiple playsets at once. He lies on his stomach and moves guys around and talks in many different voices. He distinguishes between his various Doras. He has Dora, Princess Dora, Hair Dora, and Brand New Dora. He also calls Mrs. Claus Santa's mother.

Here's Santa kicking it on an aircraft carrier 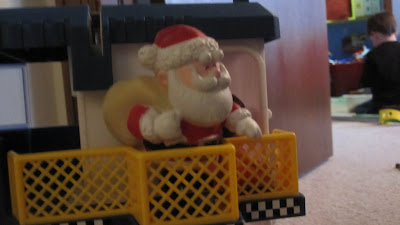 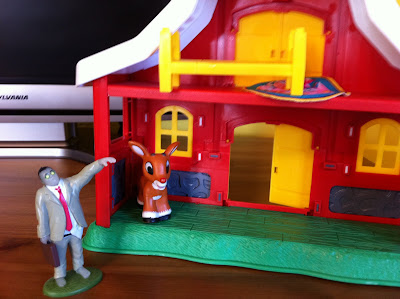 Now that Ben and I have made it through 15 minutes of un-skippable previews on The Town blue ray, I'm going to actually watch the movie. Hope you're having a fun night too.
Posted by Sarah at 8:29 PM

Dark bath is brilliant. Once in awhile I take a dark shower cuz I find it to be even more relaxing but never would I have thought about it for the kids. Great tip!

Anything done by flashlight is a hit in this house! I don't know why I didn't think of a bath before!

Dark bath is a fantastic idea!!!!! I shall remember it!

How on earth you ever thought of this, I will never know. Genius!

LOVE the dark bath idea!! that is awesome!