Today was such a cluster, you guys.

Even though I dutifully rose with my alarm at 5:50, I didn't make it to my (totally dirty and hot, hot, hot-- I left the thermostat turned up to 78 last week and left lunch remnants in my trash) office until almost 10 because I seem to have forgotten how to get myself fed and dressed and caffeinated and out the door-- and I don't even have to feed, dress, or transport the kids on Tuesdays because Ben is home. So I spent like 4 hours on myself this morning. Grrr. Then only 5 students showed up for my over-enrolled class. At first I took it personally, but then I realized some computer glitch made it look like my class only meets once a week on Thursdays, Grrrr, again. Eleventy billion emails later, I absently answered my office phone and was shocked to hear Jack's teacher on the line telling me that he had a 103 degree fever. (Thank goodness Ben was home and could go pick the poor baby up). I finished off the day as a sub for 2 sections of another class, leaving just in time to speed across town and pick up the healthy-for-now child. Blurgh.

This day did have a pretty big bright spot, though. Harry wrote his first word (besides his name): 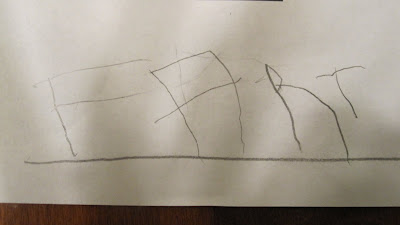 At parent-teacher conferences, Harry's teachers mentioned that Harry is a little behind the other 4 year-olds in terms of writing skills. Actually, they said, he is behind some of the 3 year-olds. Ben and I were actually not surprised. Last year, Harry was by far the worst writer in his class. He was also the youngest kid by almost a year, so we were not concerned (neither were his teachers). We worked on his fine motor skills, and he became a Lego expert and learned how to draw an awesome H. We didn't push the matter at all.

I was reluctant even to teach him how to hold a pencil because I don't have a degree in early childhood education, and I didn't want to screw him up for life, you know?

At school this year, he has to sign in every morning, and to be honest, neither Ben nor I sticks around to help him scrawl his H and the cluster of unrecognizable letters that make up the rest of his name. We thought that maybe um his TEACHERS would handle it. At conferences, though, they suggested that we take a more active role in sign-in and work on letters at home.

Ben and I had a fight about which one of us was more to blame for the our giant oversight (seriously, we have not worked on letters or writing AT ALL, assuming he was getting enough book learnin' at school because we suck as parents); then we complained to each other about the cost of preschool tuition. Then we printed some alphabet pages and told Harry if he learned to write all of his letters, he could write in a journal and make up stories.

Then he went to work writing letters: 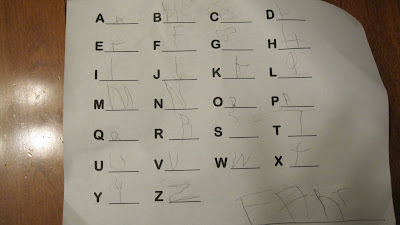 Yesterday and today, he wrote the whole uppercase alphabet twice. He is terrible at C's, G's, and S's, but he had made up all kinds of adorable things about letters-- K likes to kick other letters; R is a runner; M is a queen; N is a king; L is a foot. He was having problems remembering E, but then he noticed 3 lines and called it 3 E to remember.

He has a future as a worksheet monkey-- seriously, the kid is going to LOVE worksheets.

He even likes signing in at home-- and believe it or not, his scrawl has gotten waaaaaaaaay better in the last 48 hours 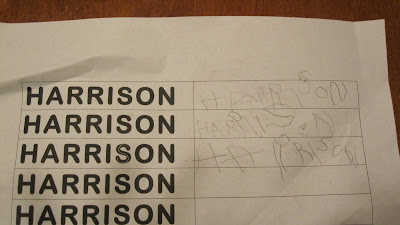 I feel absolutely terrible for not working on this stuff before yesterday.

What Harry doesn't know is that he has a whole lowercase alphabet to work on next week. And that I bought the old phonics and letter-recognition TV show "The Letter People" (I remember watching the Letter People in kindergarten) on EBay and can't freaking WAIT to show it to him. But what else can we do? Any more creatvie activities for when worksheets lose their charm? (I have a few iPhone and iPad apps, but I want some "old fashioned" activities too).
Posted by Sarah at 8:31 PM

Our preschool seems awfully laid back on the whole writing thing, but maybe that's because Charlie's in the 3's. I've tried to get him writing at home, but he's really not interested (he's also a total perfectionist and is hesitant to try things when he's not sure he can do it well). But HEY! Harry can write "fart"! That's so cool!

No worries. Just do what you're doing. Every kid writes at their own speed because it's like a light bulb moment--it'll just click and he'll be writing away. I mean, he did spell "fart". That's quite impressive.

But, you could have him label things. Maybe place mats for the table, help you write notes to mail to family members, etc. Don't beat yourself up! I'd be much more concerned as a teacher if he couldn't recognize the letters or his name when they were shown to him. He's on the right track.

HAHAHAHAHA! Glad he can spell. He will love the letter people. I still think about Letter "T" Tall Teeth. Mrs. Pickford used to reveal the letters one at a time and then we would do a lowercase and uppercase letter hunt. It was all horribly exciting because each letter was a different person. I was PM Kindergarten and the AM kids left the damn letter person out on the desk, fully exposed. At the time, I was devastated and it ruined my whole day. Now, I grind my teeth and blame AM kindergarten.

What I have learned from Owen's teachers from Early Intervention is that first born boys are typically "behind" in fine motor skills. The year before he started Kindergarten, he was in EI for OT and speech therapy, half days, the change in his was remarkable! He wasn't the same child that started that school year. This year with Kindergarten, he's writing, holding the pencil correctly, cutting the heck out of things, and reading like a maniac. Try the triangle pencils, it will make him hold the pencil correctly, it worked miracles with Owen. He's out of OT as of October, and he's doing fab. Just continue to work with Harry, encourage him, it'll click eventually.

We really liked the stuff at Lakeshore Learning: www.lakeshorelearning.com they don't have one in Wisconsin, I think, but they do have online shopping. We really liked the whiteboard stuff. It is especially handy in the car. They also have the dry erase markers with the eraser on the cap.

The funny thing is I read a somewhat heated conversation the day you wrote this about whether preschoolers should be doing pencil and paper/workbook type work. Some people are totally against, and some are totally for it. So, I bet if he hadn't picked everything up as quickly as he did, he wouldn't be the only one in kindergarten who didn't have the writing down.

can I just ask what is up with all of the teachers asking us to do their work? not that I am against parental involvement at all (and I love all the things you're doing here) but all of this "here's what your kids has to know before kindergarten" stuff is bullshit. Like you said, I am not an early childhood educator, and I KNOW I do not have the patience to teach my kids anything except that mommy is a big fat impatient bitch, so how about the people I'm paying do their jobs and teach my kids the things they need to know? Otherwise, why am I sending them to preschool?

apparently this is a sore subject for me? haha, none of this was written with as angry of a tone as it reads here, I promise!

You're fabulous parents! Please don't stress about it! Ethan is still working on his lower case letters, too--they are pretty confusing.

I am totally going to teach Ethan to write "fart" tomorrow. that's awesome.

I have no idea what Letter People is. Is that sad?

I have a hard time getting Ethan revved up over worksheets or skills workbooks, and in a way I'm glad for that, but as a kid I used to SO love them (a total worksheet monkey), so I would love to do them with him. That's sad, too, huh? :-)