OMG. I am in the most terribly rancid mood. Have been all week. Even when the kids were at school and I was home by myself laying on the couch watching vintage 90210 and eating Twizzlers. That's why I haven't blogged --because of the perpetual PMS. PPMS. Ha!

Had a bad moment today when I though our washer was broken because it smelled like burning rubber and would not spin and it would so be our luck to have to buy a new washer before we sell this place. The only money I want to spend on this house is the tens of thousands of dollars we'll lose at closing when it sells. That last sentence made me want to barf. BUT, I left the washer alone for a little bit, and it magically came back to life and spun just fine. Phew! In the meantime, I stress ate some chocolate chip brownies and fussed at the kids.

Oh! a funny story about how Ben and I became slightly less shitty and neglectful parents through our inability to follow through on consequences (sounds backward, but just wait). Ever since Jack was a colicky newborn and Ben taught night classes twice a week when Jack was screamy and Harry was not quite 2, a half an hour of television has been part of Harry's bedtime routine (POTY!). It started as a necessity. I needed 30 minutes to try to lull Jack to sleep after Harry's bath, so I could read Harry a few books without my squalling baby in the way. Then, it became a way for Harry to chill out while Jack went to bed in the room they shared, so that Harry could join him when he was already asleep. For the last year or so, it has simply been a way for me to veg out before H goes to bed while Ben is reading to J before I take Harry upstairs for books. (I mean we still READ to him! It's not all talking glowing box). A few weeks ago, Harry would not stop splashing in the tub, and Ben told him if he splashed again, no TV. Of course he splashed again, so we were like sorry dud, no TV. Harry went apeshit crazy and the only way we could get him to stop screaming was to tell him he could do a puzzle with me instead. He LOVED it and that night before he went to bed, he said he didn't want to watch TV at night anymore. Instead he wanted to do a big boy puzzle or play cards or a board game or Legos. And voila! A new bedtime tradition was born. It's fun. (also, you know, way better for him) 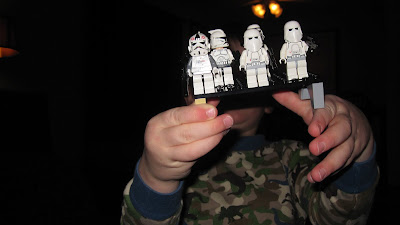 We've also started reading the Harry Potter series, and Harry is captivated. I love it too-- those books are amazing, and it has been forever since I read the first one.
Harry and Ben watched all the Star Wars movies over break, and the boys found Light Sabers in their stockings. Fun times. Fun, violent times. 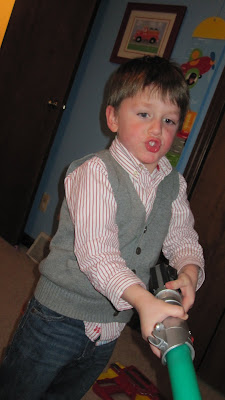 Jack is still working out his fear of Santa. He refused to put away his Santa hat or his little Santa and Rudolph figurines when the Christmas decorations came down. Every once in awhile he tells us, "Me little scared of Santa," and every night, he insists on playing the "Santa game." His fire truck becomes a sleigh; Harry is a either a reindeer or an elf, and Ben and I are sleeping children who wake up to find Santa screaming in our faces, "Wake up! Presents here." Then Harry becomes a sword-weilding, marching light-up doll, and Jack drags him back to the sleigh telling me and Ben that we're on the naughty list. They ride in the fire truck for a few minutes and then Jack screams, "New house!" and the routine begins again. 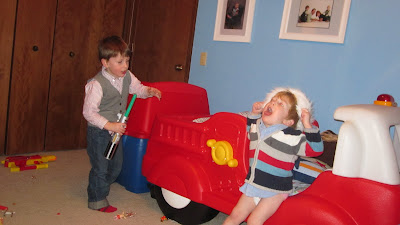 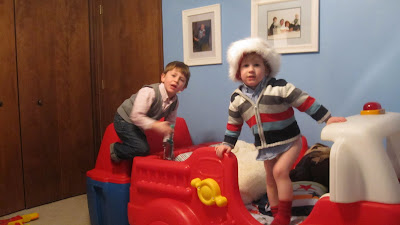 Here's Jack playing this morning. The boys told everyone at the gym that were having a lazy day, and it's true. A lazy movie day. Here's to hoping that by the time Despicable Me is over, I am way less grumpy. 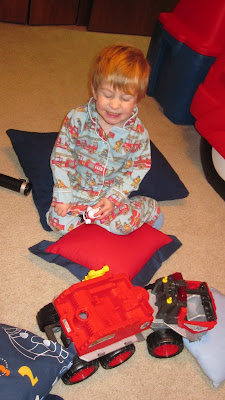 We also lost a lot of money from selling a house (thousands and thousands of dollars)...twice. It was hard but looking back, I wish I would have let go of the stress and worry sooner than I did. You'll recover. I swear. What matters is living where you want to live and having a place for your kids to call home. Hope you find a place to truly enjoy. Day to day happiness matters. Good luck!

Glad your washer fixed itself. I have to shove a towel under ours every time I start a load or it leaks all the hell over the place. I have to diaper two kids and a washing machine. I win suburbia.

I love "WAKE UP! PRESENTS HERE!"

Hope you're feeling less crabby. I'm dismayed that I can't distract James with the TV yet. Totally killing my veg out time.

Captain Underpants is cracking me up. Love his game -- so, so funny.