It's been a week since I last blogged, and during that week, at least one of my children has had a 101-104 degree fever for most of the day/night. Brutal. Ben and I have not slept through the night since January 18th, and we are starting to get a little snappy about it. Jack was sick all last week, and Harry has been sick all this week. After 4 days of a high fever, we took Jack to the pediatrician, who noted that Jack's throat looked like raw meat, but assured us the strep test was negative and gave us the dread diagnosis Just a Virus.

We had a brief reprieve from fever on Saturday night when we snagged a babysitter and went out with friends. It was a fun evening culminating in grown men riding home in car seats.

Sunday, we watched the Bears/Packers game as Bears fans, when Harry shocked us by revealing his true colors. Green and gold. Gulp. He cannot WAIT for the Superbowl. Harry was a little jerk face on Sunday, so we knew he was getting sick, but his fever did not present itself until 12:51 am on Monday morning, of course.

Monday, Ben and I juggled a sick kid by each cutting our workday a little short and praised Ben's new job again, since he had no problem being with sick Harry today, his usual work-at-home day. Today, Ben also interviewed a string of realtors, so we can choose one and list our house next week (!!). The general consensus is that we can expect to lose about a-number-that-rhymes- with-shorty K. Neat-o. We've been trolling open houses to meet realtors, but we have to wean ourselves off both open houses and constant perusal of the MLS listings. No reason to dream about more bedrooms, a yard, and a big old basement until this place sells. For a song.

And finally, last week, Harry was in an opera at school. An organization called Opera for the Young came to his school and put on an abbreviated version of Pirates of Penzance. Harry was one of about 12 kids picked to perform in the opera, and he was pretty excited. They have been studying the show in music class for a month, and last week, Harry had to rehearse Tuesday-Friday. He usually doesn't come to school Wednesday and Friday, though, so sick Jack and I had to bring him both days. This meant that I got to sort of sneak into the performance (parents weren't invited, but I got to lean in the music studio from my awkward place holding a sleeping, snoring, feverish Jack with one arm to take some other-armed pictures and shaky video). I think Harry was supposed to be a constable, but I was super late getting him and our little wreck of a Jack to school on the show day, so he got placed in the pirate chorus. Oops. Here are a few far-away pictures. Harry is the pirate in the red sweater with the white stripes on the sleeves. 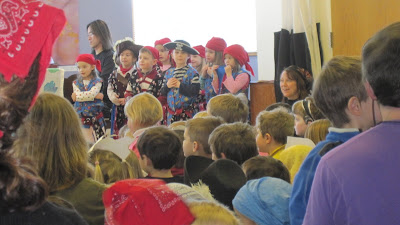 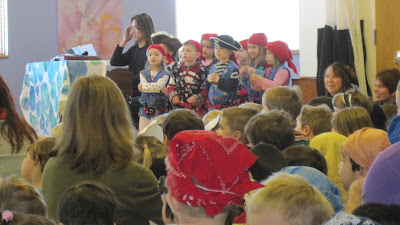 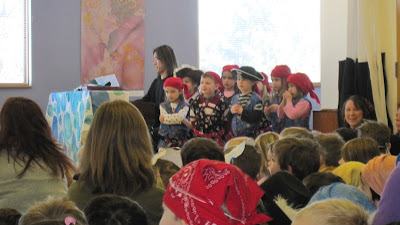 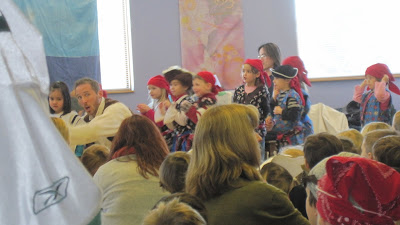 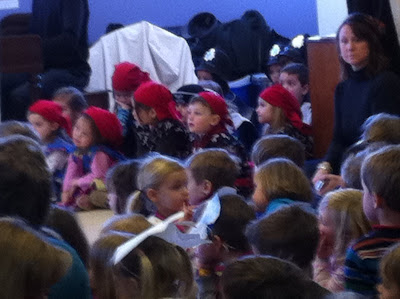 This video kills me because H is not really doing anything-- I think he was nervous. But it's 2 minutes long and super shaky, so I won't blame you for skipping it.

Jack-- he slept through the opera on this lumpy striped blanket. Oh wait. That's me. 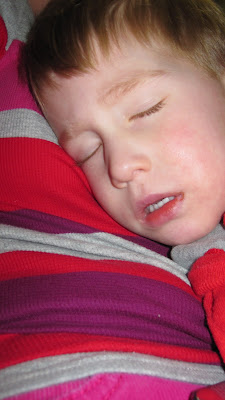 Poor Jack! Sick two year olds are the most pitiful little creatures. I hope everyone is feeling better soon!

Don't worry too much about losing the money on the house. ...in this market, such is the norm. If it enables you to find a home you truly enjoy, it will be worth it in the end.

I'm sorry about the plague, but I hope everyone is on the mend.

And the opera? Too cute for words!

Why weren't parents invited to view their child's first opera performance?!?! I would have snuck in too.

I don't know how to feel about Harry being a fan of the green and gold. I will have to hope his genetically bred Bears fan gene will shine through soon.

Sorry they're so sick. Hope you two skip it. You know kiddos have no mercy when the parents are ill.

Ha! Are you sure we are not at the same house? We've been battling a 3 day fever with Q, thankfully on the mend now! Sat. was too much fun. Do you think you guys are up for it again soon? We would love it!

Sick kids are no fun. I am not looking forward to the next time both kids are sick at all!

And I agree that I would have snuck in too - they should have allowed parents :)

awww, that last picture of Jack...sick boy. :( I'm sorry, I can so relate. We breathe fire when we don't get enough sleep... ugh. The opera is awesome though--how great they're in a school that exposes them to that!!

awww, that last picture of Jack...sick boy. :( I'm sorry, I can so relate. We breathe fire when we don't get enough sleep... ugh. The opera is awesome though--how great they're in a school that exposes them to that!!

Poor sick kiddos! How cute does Harry look as a pirate?!!

Ugh--I don't even want to think of selling our house in Virginia. I dont' think there are any words that rhyme with what we're going to lose on that place. ::shudder::