A weekend in Iowa

Now that Harry is 4, he is exceedingly brave.

On Wednesday, I took Harry to his pediatrician for his 4 year well-child check up. Our nurse (whom we love-- she has twice now squeezed us in with our doctor when we had appointments in urgent care-- she just ran into us in the office lobby and said, "I didn't think you had an appointment with us today," and when we told her our doc was full and we were seeing someone else, she worked us right in, both times) handed me the scary CDC vaccine warnings and side effects handouts she distributes on shot days. "I didn't think he was due for vaccines today," I said. "Well," she told me. "He needs to get them before kindergarten, but if we do them today, you can save him a lot of worry because he hasn't been anticipating them and he won't hear his friends talk about how terrible they are." That made perfect sense to me, so at the end of the visit, we surprised Harry with his kindergarten vaccines a year early. AND HE DIDN'T CRY! Because, he told me afterwards clutching the stuffed rat the nurse gave him as a consolation prize for the surprise shots, 4 year olds don't really cry. Except when their babies take their new toys.

So there you have it. Exceedingly brave. When Jack bashed him in the face with a heavy store door this weekend at a Children's Place outlet where we sought refuge from a wall cloud and 70 mile-an-hour winds, Harry just jumped up and down and turned bright red. No tears.

We drove to Des Moines to see my grandparents and help celebrate my grandpa's 90th birthday. We had a great time, stopping at Adventure Land with my parents and seeing some of my cousins and my brothers, too. SO much fun. Here's photographic evidence of our fabulous time:
Jack on the carousel 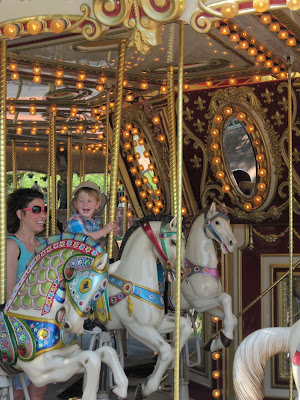 Harry on the ferris wheel. (He also rode a grown up log-ride that was too scary for me) 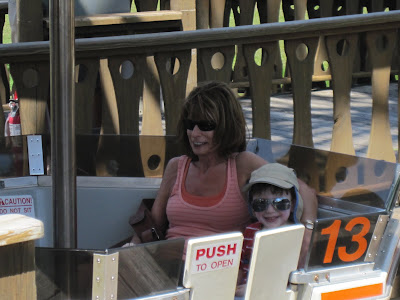 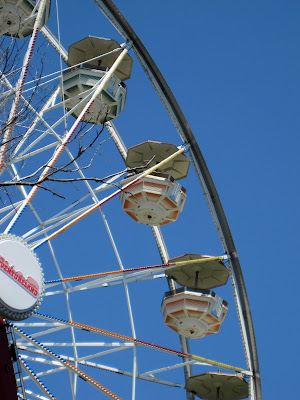 Jack ran to greet Harry when the wheel stopped spinning. 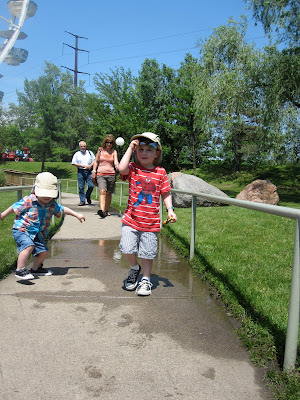 The dog freaked Jack out, but not Harry because he is 4. 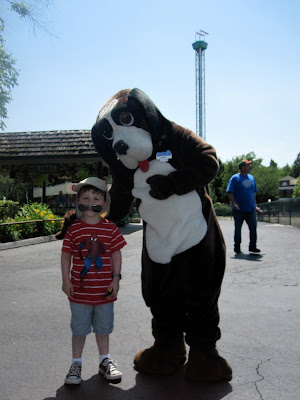 Jack loved driving these trucks on a track, and Harry humored him 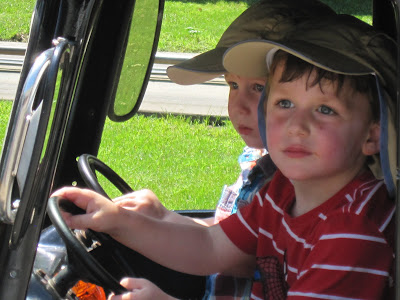 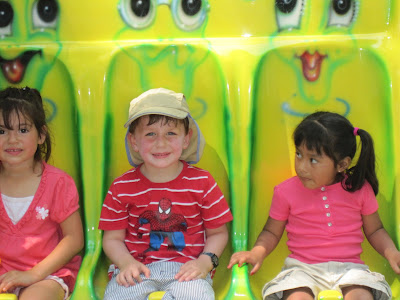 Cars on a track 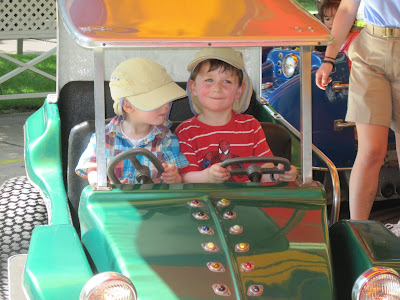 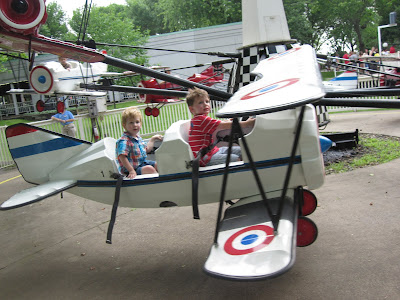 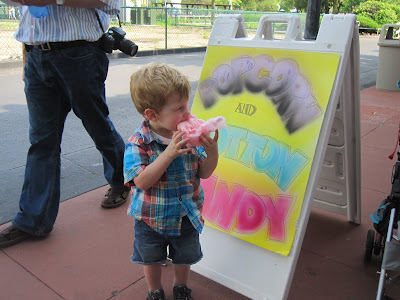 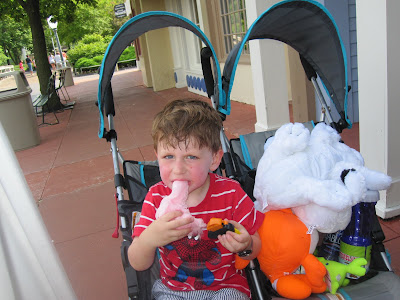 Believe me when I tell you, they were not making beautiful music 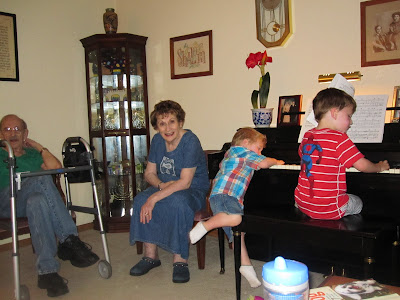 How sweet are H and J sleeping together in this fabulous king-size suite bed? Not as sweet when you consider that Ben and I were on the fold-out couch in the "living room." Next time, we'll get a 2-bedroom room, I guess. (Because Ben and I still need a living room for drinking and watching TV) (we're klassy). 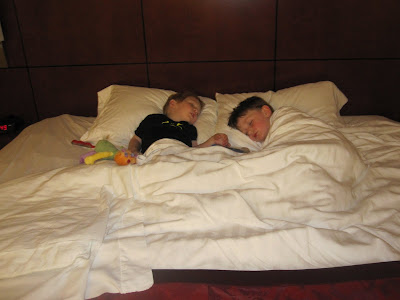 On Saturday, we saw Toy Story 3, and it was fan-freaking-tastic. Jack got a little squirmy by the end, thanks to the 5 too many Disney previews that turned a 90 minute movie into a 2+ hour viewing experience. But still. Awesome.

We also hit the hotel pool 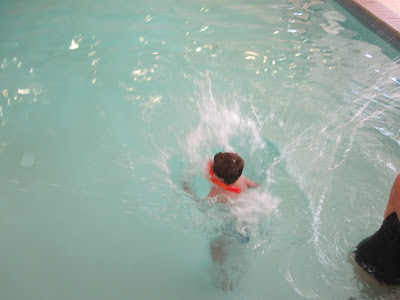 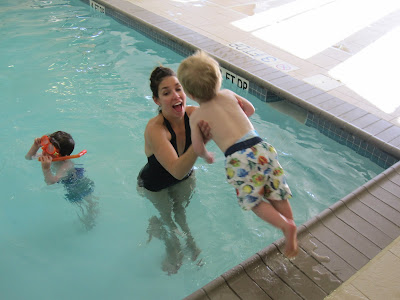 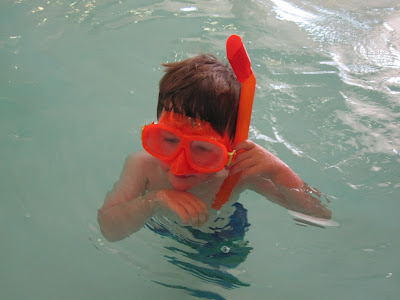 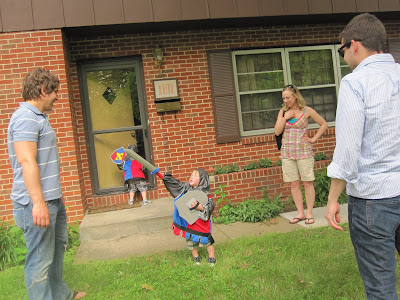 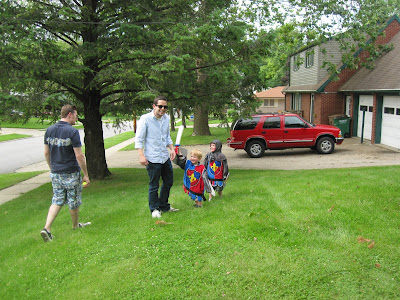 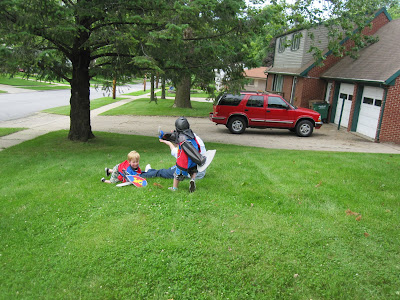 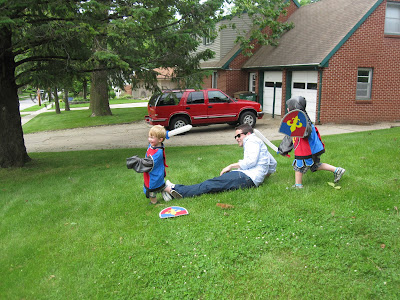 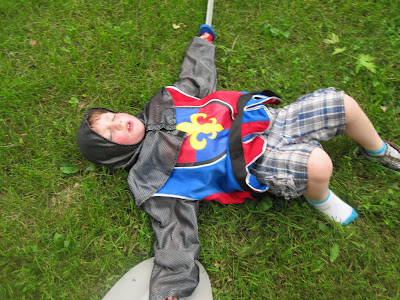 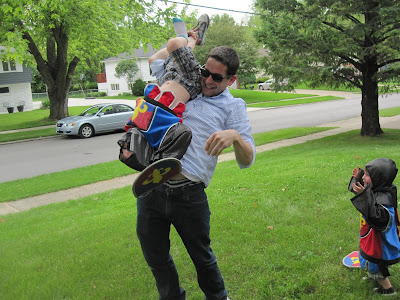 We went to my aunt's house, and Harry and jack had a great time playing with my cousin's old toys and eating kid food. 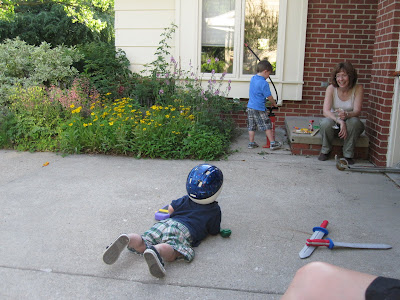 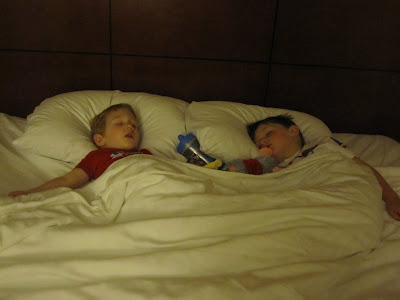 And then poor Jack spiked a 103.2 fever (and we bought a supercool forehead thermometer), and we got out of town before we infected our aging relatives 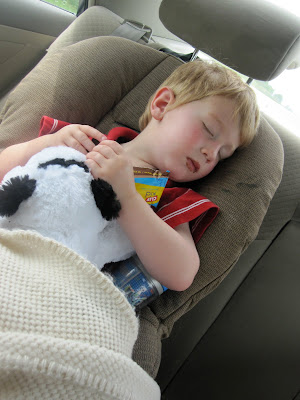 This looks like a super-fun time. I especially love the miniature knights and the pool pictures. Those boys are irresistible.

Looks like a great time! Except for the fever. Yuck.

We put the kids on the couch bed and sleep/watch TV/drink in the bedroom. Or get two queens and put them in one then sneak in after they are asleep.

We are going to an amusement park next week and I am SO excited by your pictures!

The best times always seem to end w/ fevers... but it looks like it was so much fun! Happy to hear your TS 3 review ;)

We also saw Toy Story 3 this weekend! Julia fell asleep for the first 40+ minutes and Evan told her very sleepy head that it was the most expensive nap she's ever taken.

You have inspired me. I'm thinking we might need a trip to Six Flags. Julia would love the tiny kid rides and Elisabeth is big enough for big rides. I shall ponder this....

we loved every minute with you and the children and the others...what a wonderful weekend..thank you for everything....Bomma

Sounds like a fun trip. And the staying in hotels with little kids - never fun. It is so much nicer to be somewhere where you can shut the door on the kids room!