Yesterday morning, I was driving to campus congratulating myself on leaving the house for my first day of my summer class before 8 am and looking pretty darn cute. I should call Ben and tell him how together I am, I thought, taking a swill of Diet Coke. At that exact second, my phone rang, and I looked down to see that Ben was calling me. Perfect timing, I thought, and answered with a cheery "Hola!".

"What what WHAT?" I screamed.

"I told you not to freak out," he admonished. He explained that his heart wouldn't top racing and had been racing for 20 minutes when he called 9-1-1. The paramedics clocked his pulse at 150, which is pretty freaking scary. I spoke to one of the EMTs who told me he thought Ben was probably fine but that they were taking him in to be monitored. Ben came back on the line and told me to go ahead and go to class.

So I did, long enough to pass out my syllabus to a group of students who didn't look too bummed to get out of class early and freak out our department secretary when I told her I was going to the ER to be with my husband who thought he was having a heart attack (note: the ER doctor, who was both an MD and a PhD, said a fast heartbeat is NOT a sign of a heart attack. Good to know, Dr.Dr.).

I started to mince toward the hospital, which is half a mile from my office, because thought it would be faster than retrieving my car from the garage, driving through campus road construction, and parking at the hospital. Mid sashay, I realized that Ben came in an ambulance, so I needed my car to take him home. OMFG.

By the time I got to the hospital (which totally has valet parking, so it was a cinch), Ben's room was empty, and I freaked out for a minute, thinking he was dead. Luckily, he was just upstairs getting a chest X-ray. Which was fine. As were both of his EKGs. As was his blood work, except that his electrolytes were a little off, and his blood sugar was a little high.

"Why is my blood sugar high?" he asked a nurse.

"Well," she considered. "It's not THAT high. What did you eat for breakfast?"

Dr.Dr. said she thought he was probably dehydrated and that he didn't help anything by stopping for an espresso to calm down when he first felt his heart rate accelerate. He followed up with his primary care provider today, and everything was normal.

Except for his cholesterol, which was a tiny bit high. This elevated number, which has nothing to do with his heart incident (which is completely unexplained) coupled with my own gain of 3-5 pounds made us reconsider our eating habits. 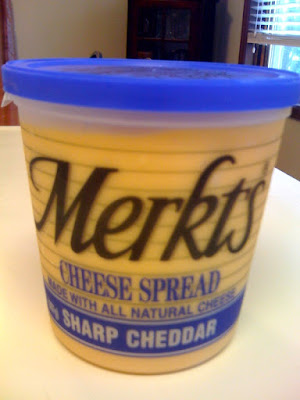 Every night after the kids go to bed, we sit on our couch and eat soft cheese and pretzels. 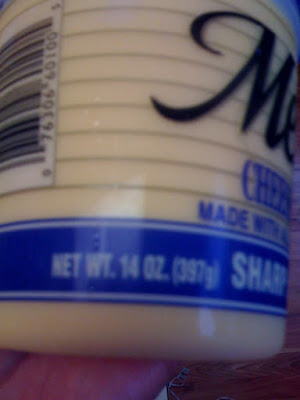 We go through 14 ounces of this shit EVERY WEEK. Not to mention at least one-- but usually 2-- bags of pretzels.

No more, I tell you. We have purged the cheese. Starting now. (Because there is still birthday pie in the fridge).

But enough about the scariest thing that's happened to us in forever. Back to Harry's birthday.

He started with presents 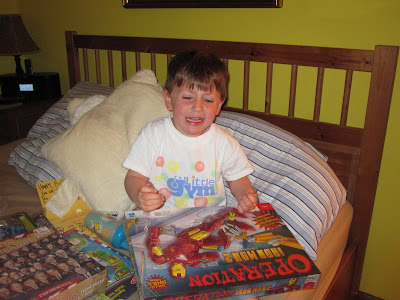 hand-delivered by his faithful servant 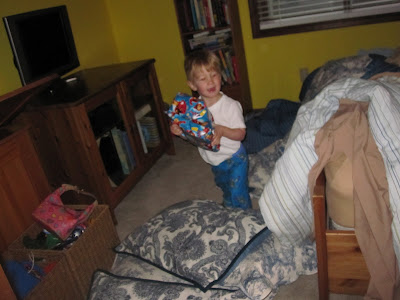 who got a couple of bears as a consolation prize for it not being his birthday. 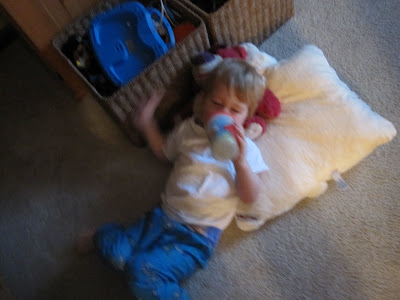 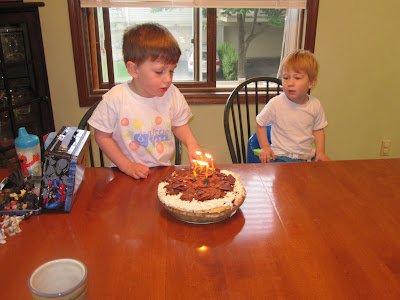 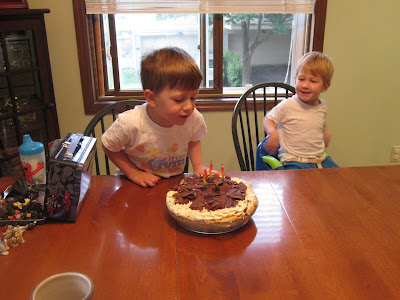 My grandparents sent Harry and Jack gift cards to Build-a-Bear for Harry's birthday, and they had the best time ever making their bears. Jack (who was totally the trendsetter--he picked his bear skin first, and Harry copied him) refused clothes for his bear but demanded a stroller. Harry decked his bear out in Star Wars gear and named him Darthy. Darthy Vader. 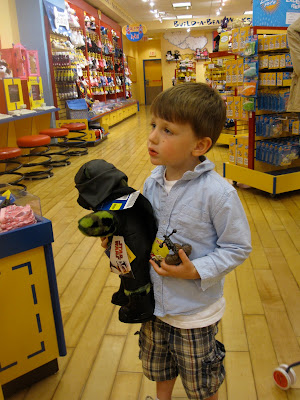 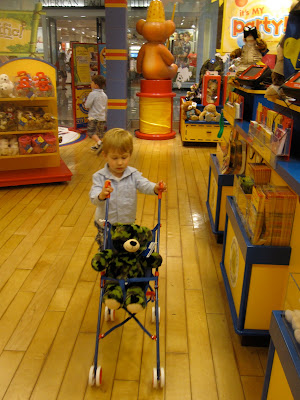 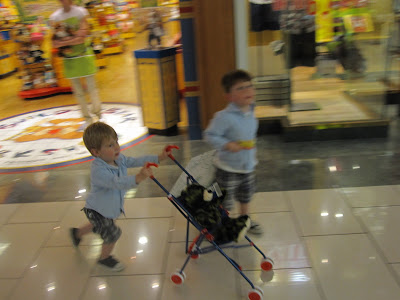 We ended Harry's birthday with dinner at a new chain restaurant that opened down the street. Harry has been wanting to eat at this pace since it opened, but we usually avoid chains. We said he could eat anywhere on his birthday, so that's how we ended up at a "thteak" house, where Jack fed his bear and Harry had a "thteak." 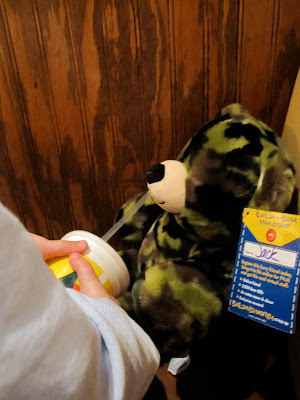 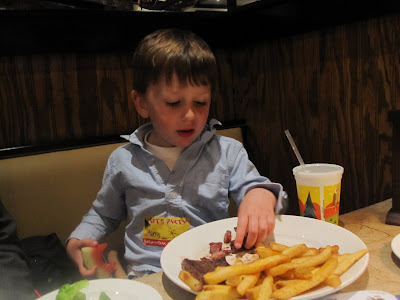 This morning when my alarm went off and Ben didn't move, I put my hand on his chest to make sure it was rising and falling. It was. He's okay.
Posted by Sarah at 8:22 PM

what a scare....so glad everything is alright, but do take care of yourselves....Bomma

OMG how scary!! How do you not freak out when someone tells you they're in an ambulance, Ben?! How?!

The part about the pie and the espresso made me laugh so loud I scared our dog. I'm always mortified when doctors ask me what I've eaten. Maybe it's time for a change.

Glad everything is alright!

My husband had a similar heart scare two years ago..except he felt his heart racing on the way to work and drove himself to the doctor..instead of the hospital. What freaked me out the most was when they asked, "Does he have a DNR?" It's always good to get things checked out, and I hope all is well with Ben. I'll tell you that in the mid-thirties that the bod stops cooperating with crappy health habits (my experience anyway) and at 40, my mortality has become a stark reality. Big wake up calls. If you want an alternative cheese (and I love cheese) Laughing Cow cheese is low fat, creamy and really yummy.

So glad Ben is okay! I hope the rest of your week is less eventful and that Ben continues to feel better.

Omg, that is effing scary!

Evan had a similar thing happen when he was getting his physical for the air force. His resting heart rate is in the high 90s, but we weren't aware of that. When he is nervous (you know, about his freaking high heart rate) then it jumps to the 120s.

Apparently he's fine, which we found out after he wore a heart monitor for a week.

Ebeth super wants to do Build-A-Bear. We have one at our mall now. She will be most excited that there are star wars clothing to choose from. :)

OMG scary! Apparently you need to keep a change of "holy shit I have to walk to the hospital ER" shoes in your office, just in case.

I would totally freak out if my husband ever called me and said he was going to the ER for any reason! I am surprised you even made it to class to hand out papers (although I understand why you did).

And the Build-a-Bear pictures - AWESOME! When AJU5 got her kitty, she just wanted the lunch box. She didn't care about the stuffed animal or clothes. I bet if she saw a stroller, she would be yearning over it!

Holy crap! Glad everything is okay! And happy belated birthday to Harry!!!

A few years back we had a scare when Brian had been having chest pains and told the nurses at work - who immediately sent him to the hospital. I got a call from him AFTER THE FACT to come and pick him up. What. the. hell.

Late on the draw here, but real glad to hear Benny's okay. My dad used to have those episodes, which turned out to be an electrolyte imbalance. I think he went to 10 different doctors before anyone had that bright idea. Just something to think about, which might preserve your cheesy luxury. :)

zOMG!!!! That is so scary, Sarah! I would lose my freaking mind. I'm so glad he's okay--but I had to laugh (a lot) when he admitted to the nurse that he'd had peanut butter silk pie & espresso for breakfast. Bless his sugary little racing heart.

So glad he's OK! Forget putting a hand on his chest in the morning to check for breathing - if that happened to my husband, I'd have him permanently hooked up to a heart monitor! So scary.

Him telling the ER doctor about heating peanut butter silk pie for breakfast cracked me up! One time I went to the ER convinced I had appendicitis, but it turned out to be just indigestion from my Taco Bell dinner.