Preschool Freak Out. For the Third Year in a Row. 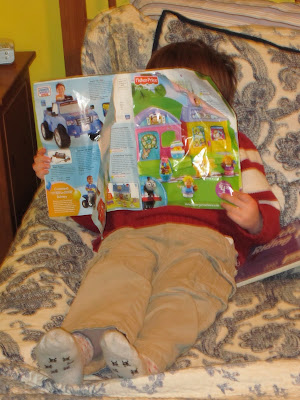 Unlike Harry who spent his time over the last week lounging around and reading toy catalogues so he could begin his epic birthday wish list, I have been FREAKING THE FREAK OUT (more than usual, even) over preschool admission season. Every year for the past 3 years, I have freaked out over preschool admission. When Harry was still a baby, the other Little Gym moms looked at my like I had 2 heads when I said he wasn't on any waitlists. (and I made myself feel better by saying that exclusive preschool were stupid, but actually? I coveted admission into one of them.) We ended up lucking out and finding a once-a-week program at a place near our house that we all fell in love with.

Despite our great school and the option to increase his enrollment for this current school year, I still freaked the freak out last year about this year's enrollment. Ultimately, we went with the place he already went to, but when a spot opened up at the teeny, tiny school we were wait listed at, we went there, too. In the end, Harry went 5 days a week, and the only school we didn't attend that we really loved after eleventy billion tours was the fine arts preschool I mentioned in the freak out post I just linked to.

Jack started the once-a-week program at Harry's current school, and we signed both kids up for school next year at the teeny, tiny school Harry also attends. Problem solved, right?

Clearly, you are overestimating my love of the preschool freak out, my friends. We applied to the art school this year, too, for next year, and we have been on pins and needles waiting to hear if we got in. WE DID!!!

I am so excited!!! There are not enough exclamation points in the woooorld to express my excitement!!!!

Harry and Jack can both go the same days and the same times, and they can go to school while I am on campus, which is genius because our beloved Jamie is leaving town to attend whichever fabulous graduate school she chooses to get advanced degrees in chemistry (and she has her pick of the top programs in the nation because she got in everywhere, and we are so proud of her!)

My snack rant from the other day? A totally moot point because this school has its own chef who makes all the snacks from scratch! No wonder it always smells like baking bread in there. (But, on the subject of snacks, I am so jealous of the place Kim sends her kids. She sent me a snack list form her center, and OMG. They have the most amazing food rules. No juice! Only hormone-free milk! No processed food or food with a high sugar content! I was in love, and I brought it to my conference. The teachers were very receptive, but they do not see themselves changing the current snack policy to include dairy, which is kind of a bummer).

Also a bummer? That Harry is leaving the school he's attended for the past 2 years. He really loves it there and has thrived there. His new school has some advantages: a huge playground, an art studio with degreed art teachers, a music room. But his old school has a swimming pool/ swim lesson program, and a huge gym. Harry has been taking a once-a-week Spanish class all year, but at his new school, he'll be in a Spanish immersion classroom with bilingual teachers, which is pretty darn cool.

If I sound like I am trying to convince myself, I am a little. Harry's teachers really seem to like him a lot, and we have been happy with every aspect of the program-- except snack. We've both made friends. Jack loves it, too.

And then there's Jack, who will be attending a lot of school for a little kid. I feel bad about that, too. This new school is not a daycare center; it is a licensed preschool. Still, it caters to 2-parent working families and offers long hours and flexible schedules, making it perfect for us, but also meaning that Jack is going to school 3 days a week, 3 full days. I'm a little worried about the little guy, even though I know that the days we spend at home will not be nearly as enriching.

Here are Harry and Jack working on their V-Day paintings for Ben. Courtney has posted pics of her kids painting on canvases, and we thought we'd give it a try. 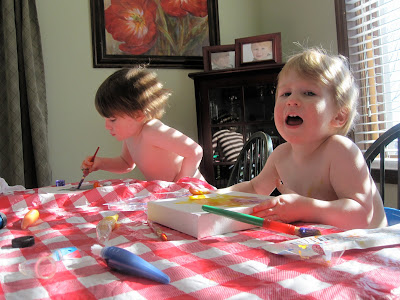 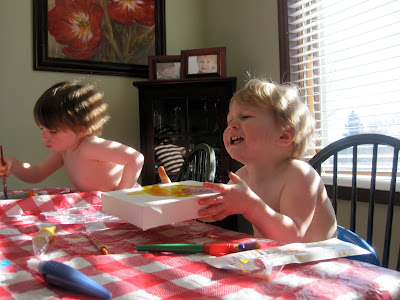 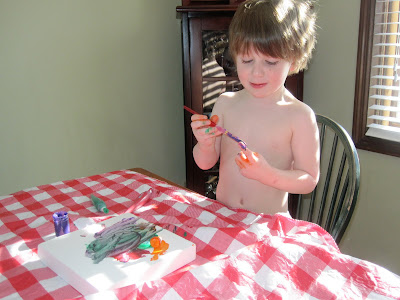 Valentine Eve, Ben and I drank a bottle of Moet and passed out in a puddle of couch drool watching Couples Retreat because we are glamorous and romantic like that.

The next morning, the kids ate their weight in Russel Stover, which is always my favorite way to spend the morning. 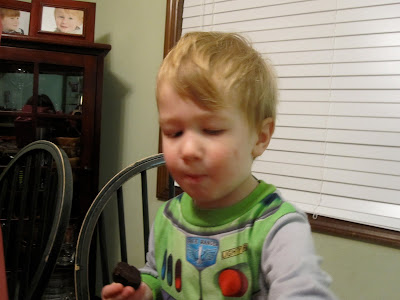 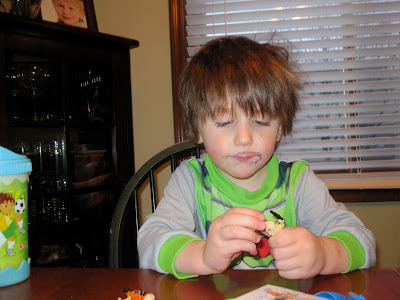 Hope you had a good Vday and that preschool admission season finds you well.
Posted by Sarah at 4:01 PM

Congratulations on the preschool! Good for you, emphasizing that right-brain development. Just watch out for the Spanish. The boys will soon learn they can plot against you in secret. Or so says Wanda Sykes. :)

You ARE glamorous and romantic. The Yorks drank bourbon and passed out in couch drool watching simultaneous multiple sporting events. (We loves us some online video.) At least ya'll had Valentine-appropriate wine and rom-com...

Haha! My only preschool fretting is "Do I send them to the lovely little school at our church, which I love love love, or do I send them to the almost as great neighborhood church school that is five minutes away from my house and open an extra two hours a day for $5 less a month?" I clearly have not given this as much thought as you. I am so, SO psyched that Wes is going to school with Charlie next year. Not for the obvious free-time reasons, but because he wants to go SO BAD. And he will be in for three days (9-1). I would prefer 9-3, but what can you do.

sounds like the boys will be as smart and sophistacated {sic} ss their parents..I'm sure you made a great choice for the fellows...love to you all, Bomma

I can not wait for Julia to go to preschool. Like now (since she is currently pushing me...which I loathe).

You know, by the time next year starts, Jack will be quite a bit older in baby years and I'm sure he'll do well. Especially if he and Harry are on the same schedule.

That chef is fantastic. Will they be sending home recipes?! (You know i love me some recipes!)

Even just reading about your preschool freak out stresses me out!
That's awesome that you guys got in though :) I'm sure they'll love it.

Although we are not doing the whole preschool thing, I am trying to figure out what to put AJU5 in next year. That is enough of a stress-or! I am glad you stress is over though!

Congrats Sarah! The preschool sounds perfect and don't worry about Jack too much, it seems like he'll be well taken care of! Love the canvases.

the school sounds wonderful and I'm sure the boys will be so happy!

I cannot wait for the kindergarten freak out.

I am so glad the stressful part of preschool acceptance is over for you!