This morning, Jack had school, but Harry did not because his teachers were doing conferences. After we dropped Jack off and came home, Harry looked around the empty living room and said, "Wow. Its just like I have no baby!" He gestured to the blow-up ball pit Jack got for his birthday that we inflated last night hoping they'd play with it so we could watch football. "It's just like I got this for MY birthday," he said.

"Yes," he replied. "Then I could show you all my tricks and you would watch them."

Here's one of Harry's recent tricks: 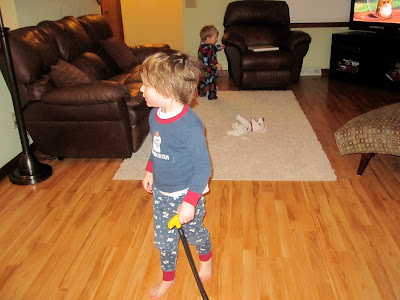 He's using the golf club as a walking stick because he is "Old Man Man the superhero." If you take away the golf club, Old Man Man says, "my cane," and crumples to the ground.
Posted by Sarah at 9:33 AM

Your child is hilarious. Exactly what super powers does Old Man Man possess?

I think we need a video of Old Man Superhero explaining all of his powers, etc! It would be great!

our Harry is a thespian, as are all the members of our family (maybe not Grandpa Jack) Bomma

old Man Man the superhero may be the best thing I've ever heard.

I like the way Jack in the background appears to be walking just like Harry is, but without a prop for obvious reasons.