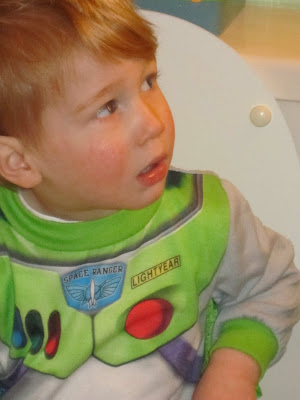 Yeah, that's Jack on the potty. No, I am not trying to potty-train my 22 month-old. But dude. He wants to be potty trained. This morning, he went into the bathroom, threw the Diego potty seat on the big person toilet, took off his pants, ripped off his diaper, and asked for help climbing up.

Last week at Little Gym, he grabbed his crotch and threw himself against the bathroom door, so I took him in and helped him onto the potty. He peed. Then we went back out to the gym, and he did it again. We went back to the bathroom, and he peed again. 15 minutes later, he claimed he need to poop by screaming "POOOO! POOOOOO! POOOOOO!" and stuffing his hands down the back of his pants (nice), so we went back to the potty and he tried so hard. It cracked me up-- he had veins bulging out in his temples he tried so hard. No dice, but he did crap himself as soon as we got home and he ran to his favorite spot behind the kitchen curtains (again, nice), so I think he knows when he has to go.

The thing is, I like diapers way better for a kid his age. Public toilets are NASTY, and I am either going to have to hold Jack up in the air, so that he can pee without the edge of his penis (really? the edge? do penises have edges?) touching the rim of the toilet, or I am going to have to help him sit on the toilet, which means I will be squatting on a dirty bathroom floor and my coats and my scarves and possibly the knees of my pants will touch that bathroom floor, and then I will have to wash my clothes and take a Silkwood shower like 6 times a day. And I have really dry skin already.

But the kid. He wants to use the toilet, and I feel bad stifling that impulse. (Actually? I think he's doing it for the Diego pull-ups and the Batman underwear. He's such a joiner.)

Also, he's my baby, and if he can toilet himself, then I might have to admit that he is growing into a real boy.

He slept with us last night from 3:53 until my 5:18 alarm (at which time he and Ben continued to sleep, the assholes) because he had a bad dream. When I got him from his crib (which? Bullshit. It was clearly Ben's turn, but he refused, saying that since Jack was clearly saying "Mama! My Mama!" I should go in there so as not to disappoint), I asked if he was sick, and he said no. I asked if he was cold, and he said no. I asked what was wrong, and he stuck out his arms like he did around halloween when he'd do his monster impression, so I asked if it was a bad dream, and he said "Yessssh."

He sucks as a sleeping partner, but he is snuggly in a thrashy, screamy, head-butty kind of way. And he had really bad breath.

Harry found this blazer in the back of his closet and has been wearing it nonstop with jeans and ironic T-shirts-- JUST LIKE BEN, who almost always wears a jacket, a StudyBlue or an attitude T, and jeans. Harry has even insisted upon donning his target loafers, which look like Ben's Keens. Harry calls his $11.99 Cherokee shoes his "fancy shoes," which actually pisses me off because his normal everyday shoes are Uggs. But anyway, here he is modeling yesterday's ensemble (the jacket is a 3T, but really, it just looks trendy and shrunken, right? No. But I can't convince him it is too small. It's become his wearable lovey). His school friend Patrick called Harry's Batman shirt "old school" which cracked me up. 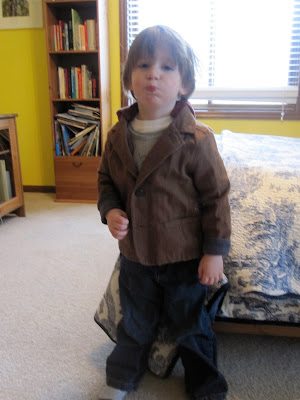 Jack has been doing this most mornings for about a year, and it's kind of annoying. Actually, it's really annoying, depending on how much coffee I have had. I'd like to graph the coffee/annoyance relationship, actually, because it's not straightforward. I mean, yes, no coffee, and I am annoyed. One or two cups, and I am not so annoyed. More than 2 cups and the coffee-jitters kick in, and I am IRRATIONALLY ANNOYED. 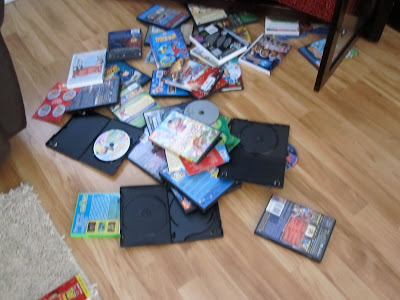 Harry totally lost his shit when I picked him up from school and his teacher said he couldn't take his Spanish paper doll home because they needed to use them in Spanish class next week. Then she felt bad because he was so upset, so she told him he could take it. Then, at his cubbyhole, he freaked out again because he was worried that if he took the doll home, it would get ruined (which? it totally would-- no question), so he left it at school (tearfully) after making me promise to make him a new one at home. Which I did. Badly. 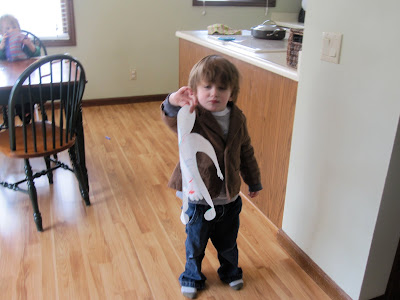 Jack's hiding behind the crayon bag, in case you couldn't see him. 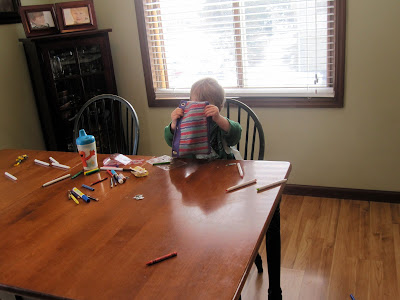 He needed a deformed paper doll to, until he had one. Then it became the most boring thing in the world. 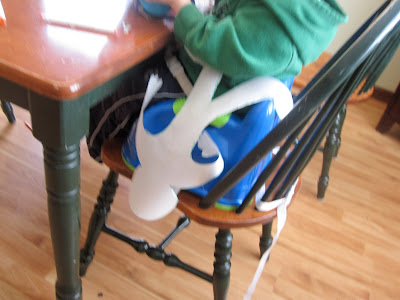 Baking cookies because that's what we do when Jack naps. 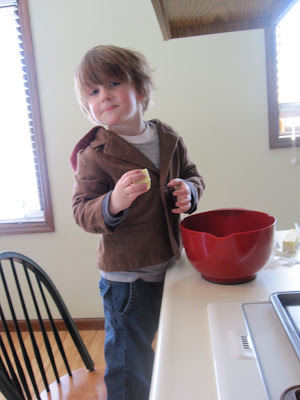 This is also what we do-- eat bowls of snacks on the couch and try not sleep watching Scooby Do. Scooby Do, by the way, is the funnest show to watch with harry because he can never figure out who the bad guy is. Yesterday, I said, "Who do you think is in the sea monster costume?" and he looked at me like I was the stupidest person in the world. "Mama," he said slowly and patiently. "That's a monster. It's not a costume." At the end of the show, he turned to me, amazed. "It was Mrs. Baker! Not a monster at all!" He goes trough this process of scorn and discovery every single time. Love it! 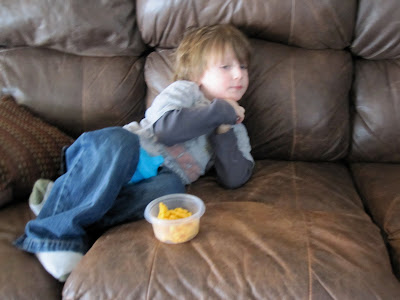 I asked Jack to show me his teeth, thinking, you know, that he might smile. 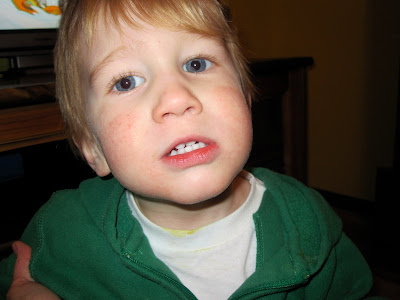 Jack is ready to be as much like Harry as possible...training boys was harder for me than training the girls. they'd turn to talk to me and pee on my shoes...Bomma

Julia is also showing mild interest in potty training. She is 20 months. Oh my dear lord, if she wants to, I am doing it! Ebeth was a monster to train and I refuse to go through that again. So, if before 2 she wants to go in the toilet, so be it. If she shows no interest till she's 4, I do not care. I am never using a timer, begging or any other awful gimmick I used with Elisabeth as long as I live, amen.

I'd run with the potty training thing. The more distance you can get between potty training and age three the better, if you ask me. On either side. As in, if Wes hasn't shown interest by 27 months we are waiting until he is five.

I would take Jack's lead but not push it too much. I would be oh so happy if AJU5 would just sit on the potty with a bare butt.

Oh, and I am "happy" to hear I am not the only one with a kid who keeps breaking out into tantrums over little things. It is oh so fun...

I agree that I'd run with the potty training... I think you have a window... and if you don't follow his lead, you'll end up with a middle schooler who is still wearing a diaper. And seriously. That would suck.

I want you to know that I am in Barnes and Noble and dang it, this made me laugh out loud (I think the coffee graph and the deformed Spanish doll plus just reading the words "edge of his penis" did me in...) so thank you for making me 'That weird girl who is laughing out loud at the table by herself." hahahah

OK, Jack clearly needs to have a talk with Sutton about this whole potty training thing. My kid does not want to even go near the potty. But that doesn't stop us from having potties all over the house! What age did you start training Harry? Maybe it's easier with the second kid, because they watch what the first one does.

I hate to say this, but run with it, as you probably know. Paige is starting to show signs (which I keep ignoring, because, dude, she's 18 months...) but it's inevitable. She brings out her little pink Ikea potty into the living room and demands that we take her pants off. Didn't we just go through this w/ Fynn??? Yikes!

I'm mostly a lurker...this is kind of weird, because Jack and my daughter are *very* close together in age (her birthday is 4/17) and I've been thinking, "I wonder where Sarah is with the potty situation?" We started doing no diapers at home about 10 days ago, just to see if it would "take". It has. She had a few times that she peed on the floor to figure out how everything worked, but now she's using her little potty chair 100% of the time that she's awake at home. However, I'm not sure how we'll ever transition to underwear and/or leaving the house w/out a diaper. That seems scary and impossible. I'm convinced 2 year olds are easier to potty train than 3-4 year olds. She thinks it's fun and we read books and have snacks while she sits on the potty.

Oh. yeah, I almost forgot. When Jack was here and we were reading before bed, we did the Firemen Use the Potty, and then I threw in Everyone Poops, before we read Bolt. He was interested.

Your kids are adorable. Re: potty training and public bathrooms, I figure if it's gross enough, he can pee outside. Otherwise, a lot of "Don't touch that!" and antibacterial gel afterwards. Not that it stops him, but it makes me feel better.

Omigosh... what a smart little cookie. I think Nathan's been giving signs for about 4 months now (he's 25 mos), but we're just too lazy... I mean, we only see the poor kid 3 hours a day.

love that last picture of Jack! I love when they are so literal!

Ethan "started" to potty train at that age, too, and didn't finally get there for good until this January. I think One-Step-Ahead makes a travel toilet seat cover you could use on public bathrooms so as to avoid the Silkwood shower scenario. Or invest in La Mer for your after shower moisturizing needs...