My schedule this semester is-- so far, knock wood, etc-- amazing. Last semester, I worked at least part of everyday (I know-- you are totally rolling your eyes at me and saying yeah like a real live grown up or something), and even though I had lots of time with the boys, it was time I spent frantically folding laundry and shoving clothes on my body so I could go to work in the afternoon. I mostly interacted with them to fill snack bowls and rotate DVDs (not really, but not totally not really, either). This semester, I have dedicated work days and dedicated kid days, and I am in love with how I spend my time. Our week starts busy; then I get a break in the middle, and then we finish up with one long work day and one part work day where sometimes I have all of my office-centric work done and get to grade papers or work on a few research projects at a coffee shop just like I used to back in the day when I was writing my dissertation (which? last year, so really not as far away as this sentence makes it sound).

Anywho, not only did I prep 2 dinners and cook one for yesterday (simultaneously-- it was kind of intense) and treat the bathrooms to a special midweek wipe down, but Harry, Jack, and I enjoyed a camp-in after Harry's nursery school morning. Jack and I put the finishing touches on the scene before we picked Harry up from school 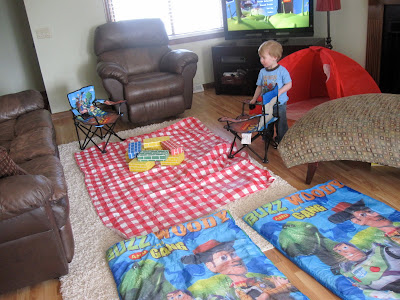 Harry came right in and sat down in his chair. He said he was pretending to watch the fire, which made me totally excited because I built a fire pit with brick blocks, and I didn't think anybody but me would know it was a fire pit, and then Harry TOTALLY DID. 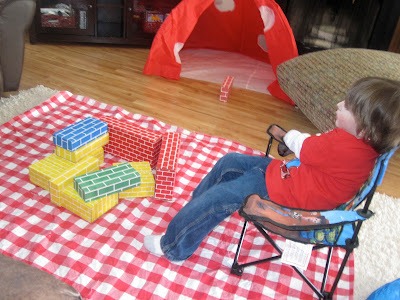 They thought eating lunch at the train table was like totally the coolest thing ever. Especially Jack, who ate his food 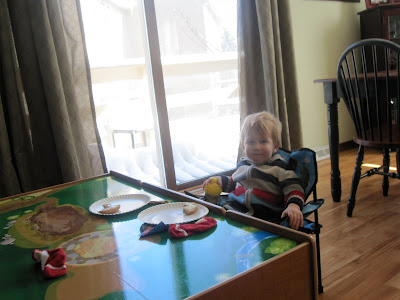 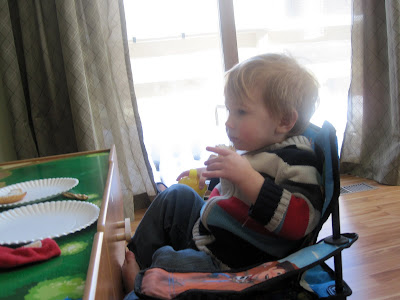 and his plate. Yep. Those are Jack's Santa (yeah, we still listen to Christmas music in the car, too) socks on the table. I can only say "No feet where we eat" so many times before I'm like screw it, man. And before you know it, they are only fit for Denny's. 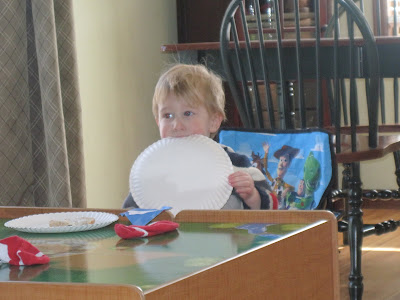 When Jack went down for his nap, Harry and I got to work on Project Preschool Valentine, which was a giant pain in the ass because Harry has 2 separate classes of 14, and Jack has a teeny little class of 8 (although Jack's class is learning about hearts next week, they aren't actually celebrating Vday b/c they only meet once a week, but I am sending little toddler Valentines anyway.) 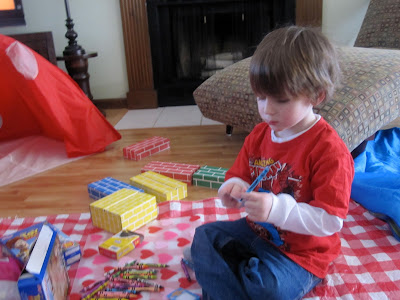 Harry patiently colored on each card 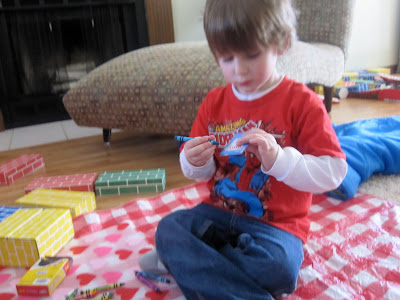 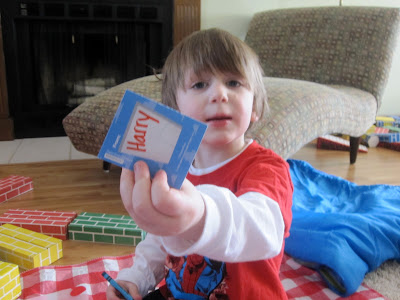 Then I drove myself batshit crazy punching out Toy Story tattoos and slipping them in the little slits on each card (and ripping a bunch of cards, so I'd have to call Harry over from his super hero action figure reverie and make him scribble on a fresh card) and Harry took six million years to close each card with a sticker. 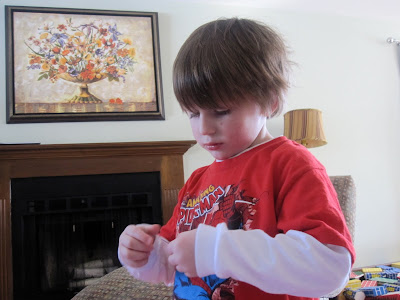 Then we did the treat bags. 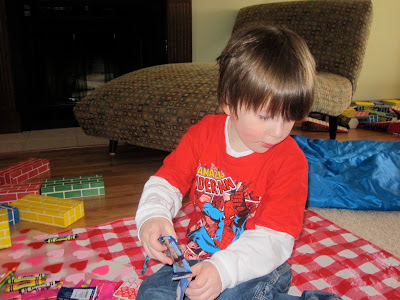 Oh the treat bags. One class got little bags of conversation hearts tied with leftover red Christmas ribbon to their Valentines. The other class got Toy Story bags with Toy Story fruit snacks, Dum-Dums, and Starburst (peanut free candy pickings are pretty slim). All of those things, in case you are wondering, contain HFCS and terrible dyes. And you know what? I don't give a shit because they are CANDY, and candy is not supposed to be good for you (and is supposed to be eaten in moderation). As long as my normal foods are preservative-free and not processed, I am all about giving candy as a treat.
I never, ever let the kids eat fruit snacks b/c they are awful for your teeth and have terrible chemical ingredients, but I am fine with giving them as candy, and Harry was like beyond excited to see them in his home. "Fruit flavored snacks?" he asked. "For me??" Poor kid-- I am making him into the little boy in About a Boy, aren't I? 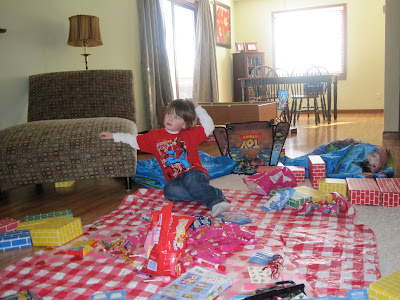 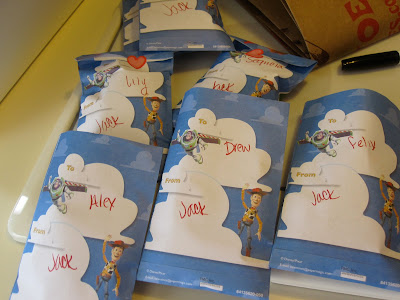 Conversation hearts and Dum-Dums, two things that no baby in his class-- including Jack-- can probably eat. 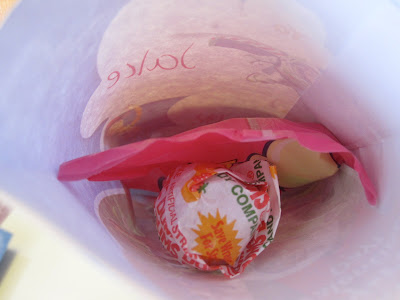 Our Valentine assembly line took up Jack's entire naptime. Harry and I had just put our stuff away, grabbed some Pirate Booty to counteract our teeth-itching sugar high (we had to try all the candy, duh), jumped in the Toy Story sleeping bags, and collapsed in the tent to watch Little Bear when Jack awoke and turned our cozy scene upside down. Literally. 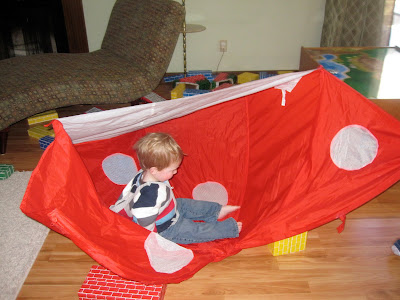 And then we went outside and played, which was way more fun and magical in November when snow was a much anticipated miracle. Now I can't wait until May-ish when it finally all melts. 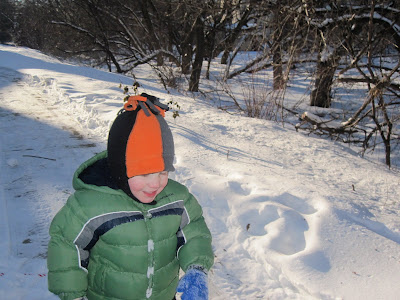 Finally, we went inside and started sending Ben increasing irate and totally ignored texts because dude? Looooooong (but fun!) day.
Posted by Sarah at 10:43 PM

my kid is probably going to be totally ostracized at school bceause our valentines were just plain old cards from target with nary a piece of candy in sight. boo, bad, lazy mommy.

Sounds like fun! I am so glad we only had to make eight Valentines! Love the camp-in too. We may have to do that if the weather here never improves.

even with all your teaching, cleaning and cooking, it looks like you all have such enjoyment with each other, it makes Grampa Jack and me very proud of you and yours..Bomma

I bought the same Valentines! Glad to know the tattoos are going to drive me crazy. I looked at them last night and thought to myself, "Ugh, those look like fun."

Also we are not allowed to bring candy to our preschool. At all. Which means I did not buy any, because if I wasn't giving all away, I would just eat it all, which is not what Valentine's day is about (that is Halloween).

And finally, where did you get those pint-sized camping chairs? I NEED some!!!

Your camp set up looks like a super fun time :) I'm inspired... we might have to do that over the weekend.

Great idea for how to have fun inside and make it feel like you are outside! It bet it was a lot easier to keep an eye on the boys that way!

I am so glad we don't have to make any Valentine's! I did buy some candy for AJU5's friends at church, but that is it. Dealing with little pieces of paper and tearing the cards apart was enough of a pain when I was a kid!

We did the tattoos in the little slits for Sophia's too. When your kids are eight you can make them do that crap themselves! lol

And i totally knew that was a firepit.

Submit a photo for the Dum Dums contest at www.lifeofdumdums.com for a chance to win $2500 & other neat prizes!