The other day, I tried to get my hair back to its natural color and ended up with some seriously dark hair. In person, it is more Elvira-y than in this pic, and I jump a little every time I pass a mirror. Forget advice to my undergraduate self, I'd like to tell myself from last May to ignore the silvers on my part line and put the hair dye back on the shelf because I was heading down a long and expensive road. After a home color job, professional cherry red streaks, professional all-over caramel, and 3 more box jobs, I have totally forgotten my natural shade. I have also colored my hair 6 times in the las 8 months. Yikes. 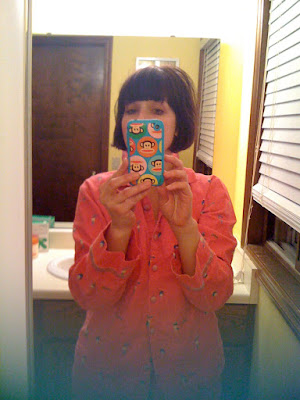 Jack on Groundhog Day. His class made hats. Hahahahahaha. 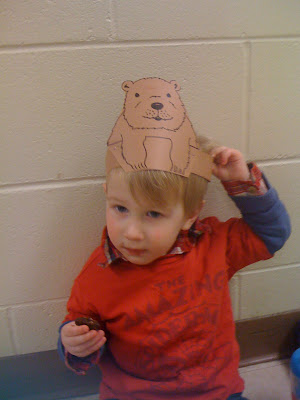 We made a big deal out of some toe lint Jack had a week or so ago. He wore a new pair of socks, and when he took them off for bath, these huge balls of fluff came out from between his toes and floated in the water. Harry and Jack both thought the excessive toe lint was hilarious, and now every night, Jack rips his socks off before bath and digs between his toes for more fuzzies. The other night, he found no lint on his feet, but he did see some on the floor and went to work jamming it between his toes. 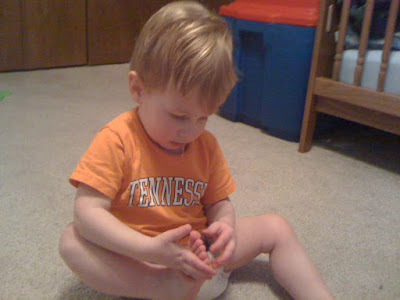 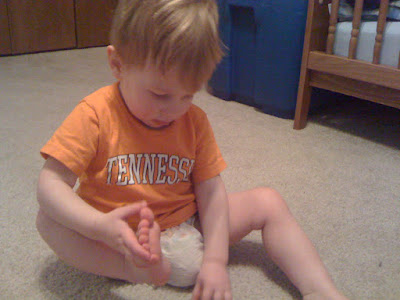 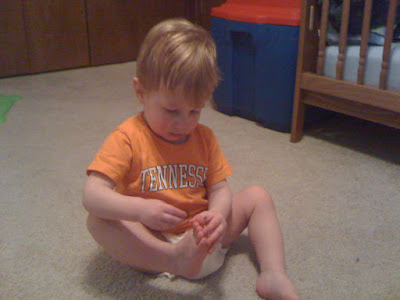 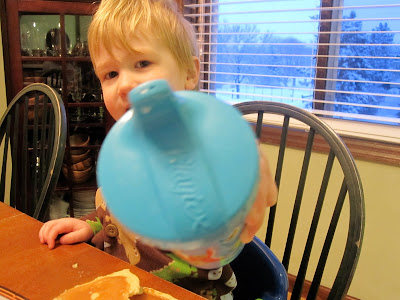 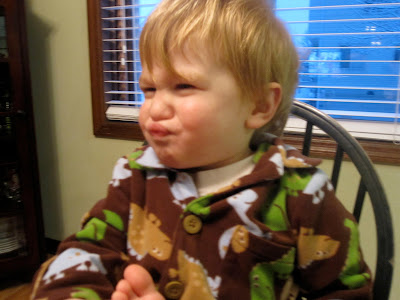 inspecting his toes at the breakfast table 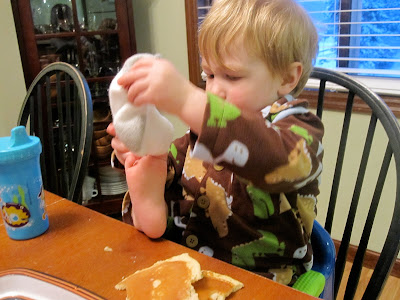 If you couldn't tell from the picture overload, I am pretty much obsessed with Jack lately. He has reach a pinnacle of adorableness. The way he says yes (yesssssh), his deliberate and very loud kisses, his obsession with wearing underwear outside his clothes. I find all of it scrumptious. Add in his fat feet and chubby face and sweet smells, and I want another toddler in my life RIGHT NOW. What's the deal? Why am I addicted to babies? Is it some instinctual survival of the species thing that makes babies so irresistible?

Ben and I go back and forth on baby #3. Some days we are ready to make it happen and know exactly when we'd like to start trying. Other days, our kids are a little, uh, challenging, and we decide that another baby would be chaos. Lately, we've been so in love with Harry and Jack that we don't want to change anything about our little life. But how do you know that you're done having babies?
Posted by Sarah at 7:47 PM

I could have kept on having babies... except my husband would have divorced me because when I was pregnant with Paige I was a monster. Seriously. Plus, our kids don't sleep, and I think it's genetic.... and we like to sleep... so yeah, we're done.
Though I still get pangs whenever I see a baby. I think some people just know, and others, well, it's a guessing game.

I can track my cycle based on how bad I want a third. When I am ovulating I could have eight more babies. Any other time? I'm all set with two. It's bizarre. And clearly evolutionary.

We know we are done, at least for a long time, because we cannot afford a bigger place to live (CA housing prices suuuuuuuck) and we're all full with two kids. But if we move, well, I'm sure Sam is looking forward to that conversation! He is tired of being tired from little kiddos not being tired when he's tired and wants to sleep. It is hard for me though to think that we might never have another baby in the house, especially when I think about how fast the kids grow!

Also, the toe lint thing is funny, and kind of gross! Aidan sometimes has belly button lint and is way too proud of it. Boys...

Ha!! Love the Toe Lint pics...Mason calls it "piggy toe fuzz".. Love it! As for #3, well in my case, its simple. I only have a uterus left..so I would have to REALLy go to extremes to have another..but yeah, it AINT happenin'! I get WAY too sick being pregnant, have WAY to risky pregnancies, endure WAY too serious deliveries (sections)..and well, Im pretty blessed to have my 2...so why risk having a third and losing my life..Whoops..this isnt about me is it?...anyhow..I think some people are cut out for it..some people arent..and some people are just wired to handle how ever many God gives us!

We're the same. We go back and forth between wanting #3. And it's totally based on whether we've had a good or bad day with the girls. :)

I don't feel like we're done. I know, I know, I'm one of "those" women who has "notions" on how big her family should be. But, I see us with one more and usually (4 out of 5 times) Evan agrees.

I dyed my hair once in high school, and it turned out WAY redder than I anticipated. Since then, I have just let my hair be natural. It is just so much easier, even though there is a little grey at the part (probably like yours).

As for the kids thing, we are very undecided about 3. Luckily, we know we are waiting at least 15 more months, so we can "relax" until then. It is such a hard question!

Last time I asked that same question, I was still nursing and (blisfully) not having cycles. Then one cycle hit, we (stupidly) thought we'd be okay not using birth control for one month, and here comes #3 in August. Turns out we really are stupid b/c it took me two tries to get pregnant with Allie and one with Taylor.

We were totally on the fence. To be honest, I'm still on the fence sometimes. However, I am not completely positive that we are done with 3. So maybe you really do just know when you are done?

i love Jack toes! So cute!