I'm so pissed about this formula thing

that I can't even come up with a good title for this post.

Have you heard about it? The whole melamine in infant formula thing? It really makes me hot under the collar. Especially the article I linked to about the FDA setting safe levels. Safe levels? Melamine "is used to line cans, make flame retardant and cleaning products, and does not occur naturally," according to the article I hyperlinked. Line cans?? Make flame retardant??? Does not occur naturally???? Why the eff would I want my baby to ingest it? How do we know that any amount is a safe amount? What the fark is wrong with the FDA??

We used to use Nestle GoodStart in Jack's cereal, but we switched to Enfamil Gentlease, which, as far as I could tell from the Google, did not even have trace amounts of the harmful chemical that is often found in cleaning products (so great! if we run out of fake milk, we can just use a little Pinesol. sweet). Enfamil Lipil with iron had trace amounts; Similac would not release exact numbers the filthy bastards, and Nestle had .25 parts per million**, which is safe according to the FDA, but I say we ask all the babies with kidney stones in China how safe it is. And where is the consumer outrage? These big three labs (Mead Johnson, Nestle, and Abbot) make 90% of the infant formula on the market-- including store brands. So NOTHING is safe!

Parents who bottle feed are just SOL, huh? I am being dramatic for someone whose baby only drinks 6-8 ounces of the stuff a day with his oatmeal I guess, but on the heels of the BPA debacle (ha! that's supposed to be safe, too! bring on the endocrine interrupters!) and all the lead paint toy recalls, I am just fed up and freaked out.
God knows what kind of harmful chemicals Jack is licking off this thing 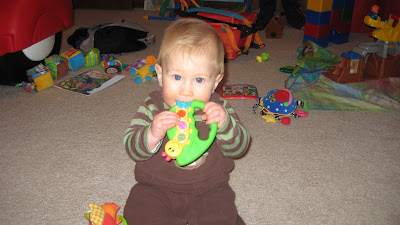 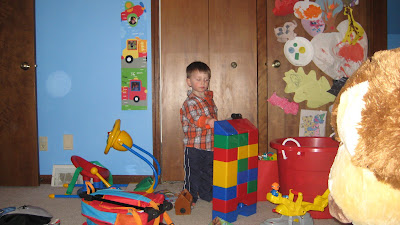 **I am sure these numbers are not accurate, as I have found different ones in different places. But if you come here for accurate medical/scientific information, you're screwed anyway!
Posted by Sarah at 3:02 PM

Very impressive art display! And it makes me angry too! What the hell are you supposed to do? It's absurd. Meanwhile I will continue to feed Wesley nineteen times a day myself.

This just makes me thankful that I was able to use VERY little formula with AJU5... It also makes you wonder what else is in baby things!

I am totally with you on this one. It is absolutely infuriating to me that companies who claim to care about babies get away with this shit.

of course, it's been happening forever; Nestle thinks nothing of pushing its formula on 3rd world countries, when it knows the only water available for mixing it is dirty, disease-infected waters. They don't care how many babies they kill as long as they turn a profit; they're just going to find it harder to kill American babies than it is to kill them in Africa.