Gluttony and other sins

Here's Jack trying to crawl on Christmas Eve. He can go backwards really well, but to go forward, he sits up, throws himself on his stomach, sits up, and then does it again. 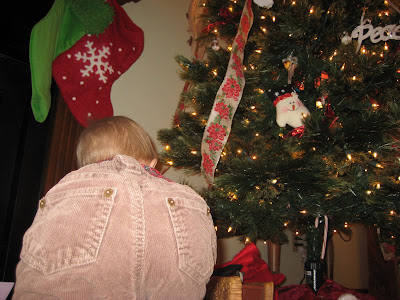 Harry is totally impossible to photograph these days 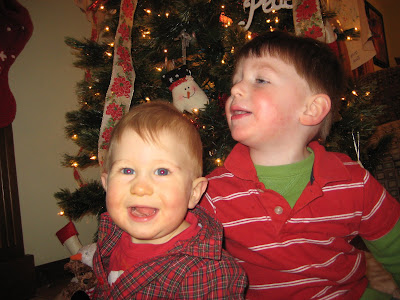 Here he is next to the weird plate of food he left for Santa-- Rice Krispie treat, fudge, carrots, a green pepper, and milk. He also left a multimedia art project mainly made by me and Ben--Harry was busy flinging pipe cleaners across the room and sticking little googley eyes in odd places. Note-- he is not wearing a fireman's jacket. It's a Santa coat, and don't you forget it. 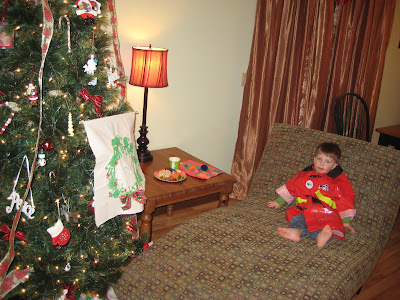 Jack was not as ready to go open presents at 5:45 on Christmas morning as a certain two-point-five-year-old who will remain nameless 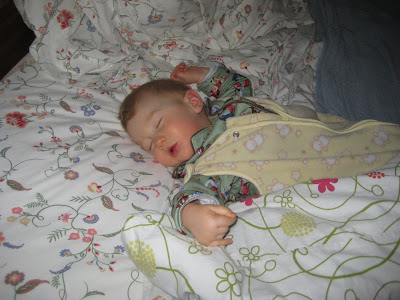 He admirably yawned his way through his stocking 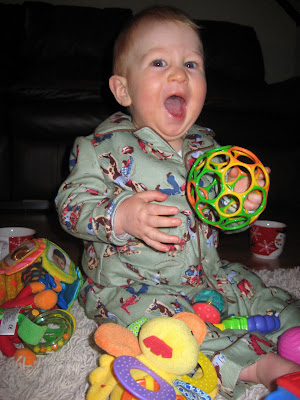 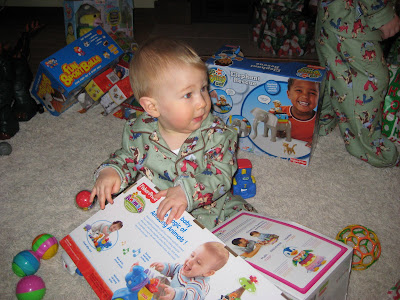 Harry ripped through all of his presents and then demanded that I assemble them. Then he knocked Jack over and took all his toys. Christmas really brought out the best in him 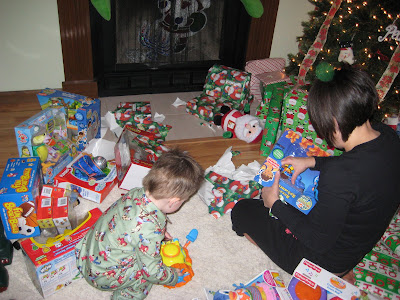 Ben and Jack both liked Spike the Dinosaur quite a bit. Harry claimed that Spike was his new best friend, but he was more than a little scared of him-- liked him way better behind the plexiglass box at Target 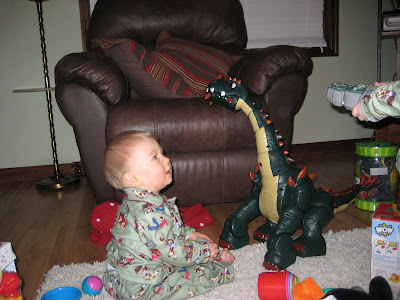 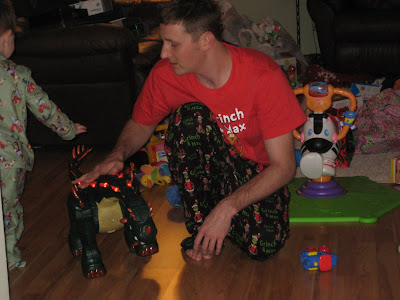 Jack became his usual affable self as the morning progressed 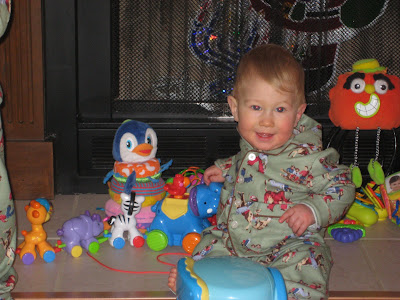 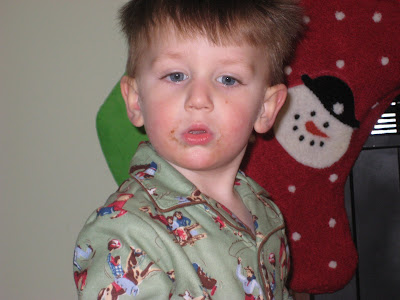 Then we dressed in matching Old Navy holiday t-shirts and piled in the car to drive to Illinois and spend Christmas with the grandparents. This is the point in Jack's first Christmas where Ben and I really dropped the ball. Not only did we not buy a baby's first Christmas ornament (not even on sale the day after), but we DIDN'T TAKE ANY PICTURES OF CHRISTMAS. Except for these of Jack and Lucy 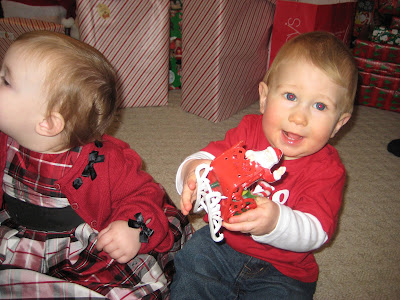 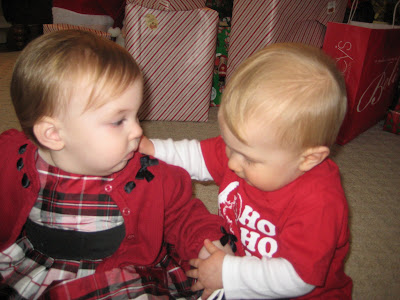 Because Harry lost his shit during present opening and never regained it, so Ben and I never had a free hand or brain cell to think about archiving our precious freaking memories.

Apparently, the fifty bajillion presents Harry opened were not enough for him-- he wanted all of Max's toys and Jack's toys, too. He would have stolen our new dish towels and wooden salad bowls, too, if we had let him.

Then he willingly went to bed at 7:00 before dessert had even been served.

So maybe it's less of a greed inspired meltdown and more of a no nap thing. (Oh! He really likes peeing in urinals, by the way-- and maybe the potty training and the fact that his increasingly mobile brother is getting more and more attention by the minute are screwing with him, too. Or, you know, maybe he is an overindulged brat.)

Here we are coddling-- uh, cuddling-- the next morning. 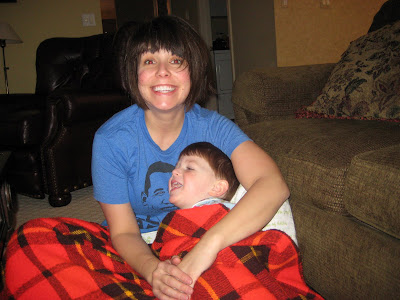 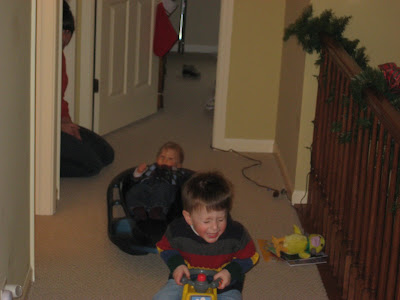 He tried to pull us all, but clearly he had the most success with Jack. I include this picture, though, to show you Jack's awesome outfit, including his onesie with a tie printed on it. A power tie. 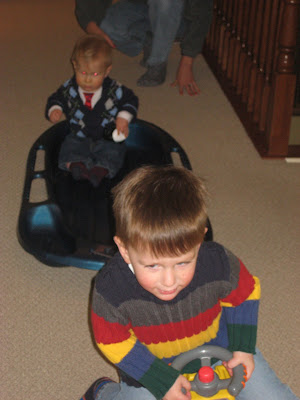 Jack and his grandma 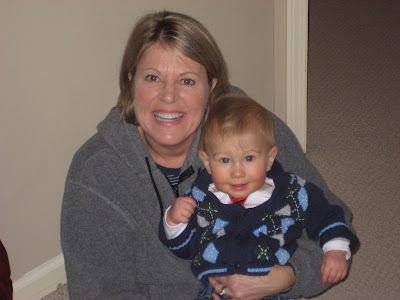 Jack could not pull Harry, and Harry was pissed 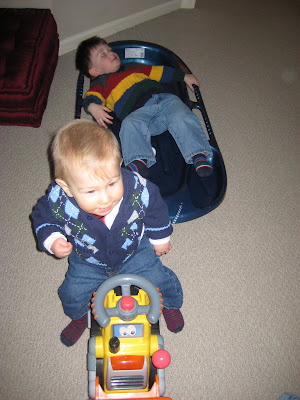 We came home in some intense fog on the 26th and immediately removed all traces of Christmas from our house. Except for all the toys. WHAT ARE WE GOING TO DO WITH ALL THE TOYS?????
Posted by Sarah at 7:40 PM

Jack looks so cute in the tie onsie! I love it! can't believe how well he rides the truck!

We had major overstimulated boy Christmas problems too. But they didn't manifest themselves until one AM. It was super awesome. Loved the pictures!

I love Jack's yawning while opening! It sounds like you had a good Christmas (other than Harry being overwhelmed most likely and having a melt down).

i am in toy hell right now. good luck to you!

Great post! that picture of Jack sleeping is so precious!! And yeah, I can't get a picture of Ethan right now to save my life.