The Chrismukkah Season Is Upon Us 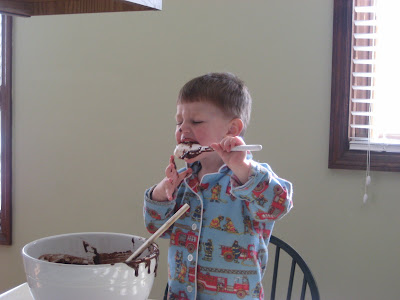 Yes there are eggs in this batter. Yes, he ate it anyway. 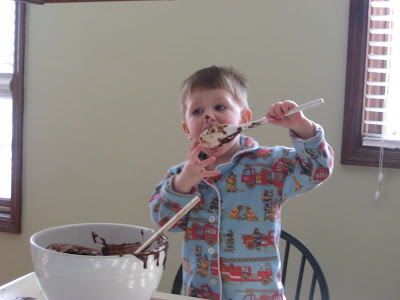 How could I resist this face? 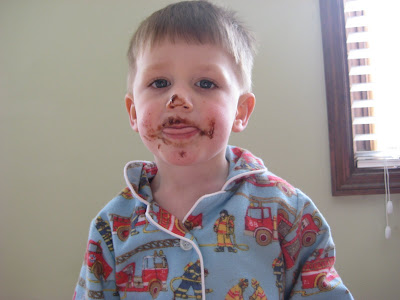 I wish I had something interesting to say, but I should not even be posting these pictures right now. I need to work on the dissertation that is crushing my soul. Cheery, huh?

In other news, it's snowing, and I have seen Polar Express 6 times since it was on cable and we DVR'ed it. It's been Harry's first brush with commercials on TV because he only watches PBS and Noggin-- not because I am anti-consumption or anything unAmerican like that (puh-lease-- you've seen me shop) and not because I think PBS and Noggin are somehow good for him (TV babysitter is TV babysitter, and no matter what you say, it is NOT preschool on TV) but because we have long suspected that he would lose his shit during time away from the show. And this assumption was a good one. Every freaking time the movie was interrupted for a commercial-- which was a lot because ABC Family needs all the advertising dollars it can squeeze from the Macy's cashmere sweater commercial (which? worked on Harry-- he said, "Let's buy that for my mama" after the 6th time it was on)-- Harry said, "It be back? It be back soon? The Christmas movie be back? The Christmas movie be back soon?" We probably could have just answered him the first time, but instead we let him drone on and on like a friggin myna bird until we snapped and screamed, "Yes! After the commercial! Just watch the damn commercial!"

It was a wholesome family evening. 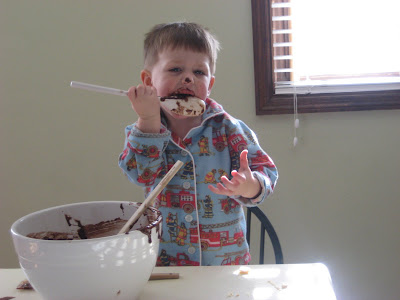 Good stuff! Love the batter-face pictures. So much fun. I let Charlie do that ONE TIME and now he eats other things out of mixing bowls, like uncooked green bean casserole. Mmmmm.

How wonderful to have someone not quite three to play with..sometimes....Bomma

He cracks me UP! These pix are so cute. Did Harry like the commercials? Some of them are lots better than the shows!

I love batter - any kind - even though it could be bad for me. I am glad Harry shares this love!

Sorry to hear about the soul crushing dissertation. I hope it gets better for you.

Mary has a similar response when TV babysitter, I mean Noggin puts on a commerical for Nick. The Family Matters commercial is devastating to her. She always thinks we have changed the channel and yells "Oh no Mommy, grown up tv!'

Looks like Harry is a good little baker. He has the sweetest face, how can you stand it???