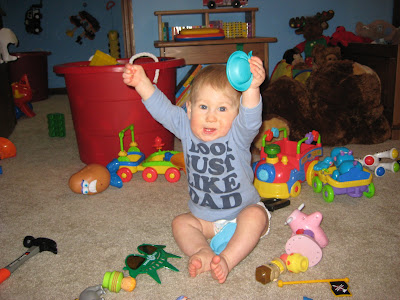 How big is Jack?
Eight months is Jack's most adorable age so far. He sleeps in our bed, and sometimes I am annoyed at night because he is contantly waking up to nurse, but then I catch sight of his fat pink toes, or he grabs my face with his hot little hand, and I am nothing but glad for his squishy company.

Last night, I read a post from a mom on a message board who was asking for ways to get her 2 week old son to sleep somewhere besides on her. I thought of hugging my angular, squirmy toddler and the way Jack's feet reach to my thighs when he lays on my chest, and I wanted to tell this poor, tired woman to love letting her teeny little boy sleep on her chest or cradled in her arms because soon-- sooner than you can possibly imagine-- he'll be too big. But that was probably the last thing she'd want to hear, so I typed nothing.

Jack fell over in the tub last night and smashed his face on the drain and went totally under water-- and he LAUGHED about it. He is a little 18 pound bundle of joy-- literally. The fat rolls on his thighs even look like smiles.

He is content to sit around and chew on dangerously small toys for minutes on end. 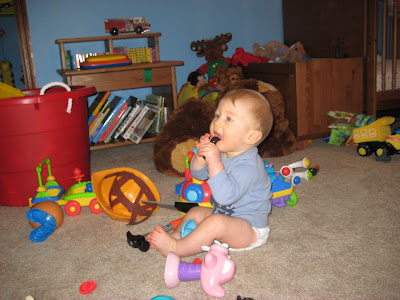 He can't really crawl yet, but he really, really wants to. That's the only time he even gets crabby-- when he wants something just out of his reach. 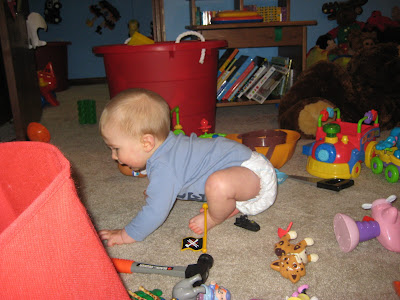 He even went pantsless with Harry in potty training solidarity 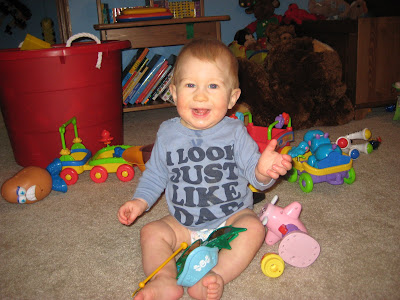 He was not the most cooperative at his 8 month sign session, but still really happy. Even when he actually ate the paper and didn't really like the taste. 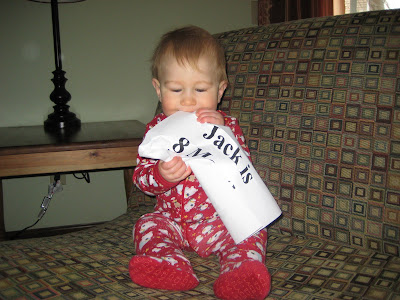 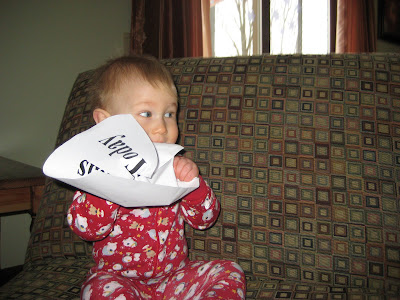 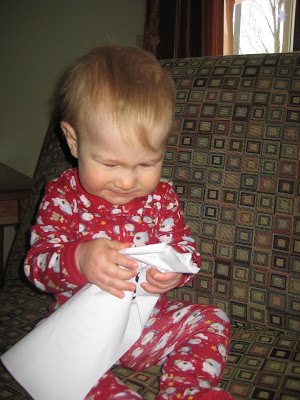 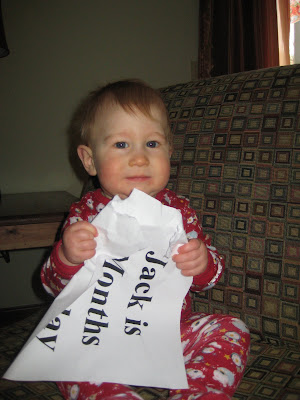 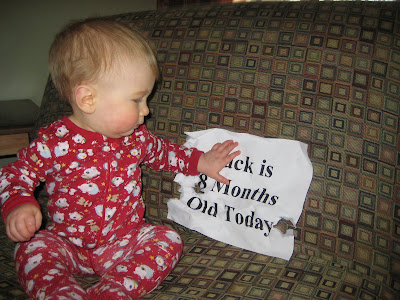 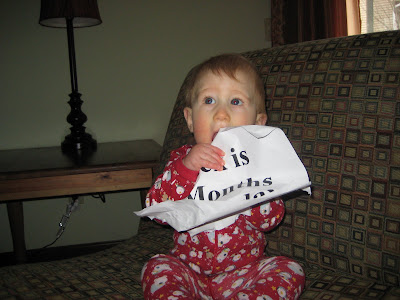 To the gym I go to work off the orange scone I ate while typing this. But oh boy do I have some stuff to tell you about Harry and potty training. He asked me to close the bathroom door this morning "so Jamie and Jack won't see us," though, so I am not sure if he'd like me to share his business over this series of tubes.
Posted by Sarah at 10:47 AM

You'll have to tell memore about this potty business. I don't want to be shipping diapers up to Cambridge when Charlie goes to Harvard, but it sure seems like that is the direction we are headed in.

Jack is a sweetheart!

Sarah, this is the best thing I read all day! These pics always make me smile because your kids are soooo adorable. I want little ones that I can dress in button up shirts and edgy hair styles.

what wonderful pictures, (narrative too), but I always knew this boy would be as exceptional as your first, and you, yourself, at this age....Bomma

Oh, Jack, you are getting so big! I am glad you like paper and small-ish toys just like AJU5. Don't give your mommy too much of a problem at night though. I bet she would be even more cheerful with a good night's sleep!

I LOVE this post! I am so proud of Harry and Jack! How did Grumpy Jack turn out to b so jolly?

"the fat rolls on his eyes look like smiles".
Love this line. He is so sweet.