This morning, Harry was busy cooking in his kitchen. We asked him what he was making, and he said, "Panda cakes."

We were like, oh that's so cute, and said, "Pancakes?"

We looked in his oven and found this: 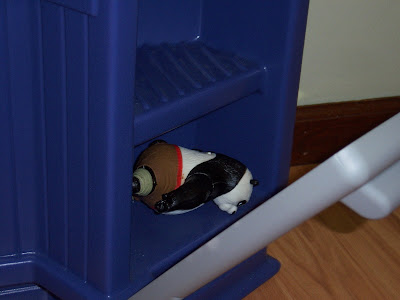 I am writing this before I go to bed, and when I wake up, Harry will be 2. Well, I guess that's not entirely true-- he was born at 8:40 am, and there is no way in hell that I'll be able to sleep that late (but oh god I wish I could). Still, it'll be Harry's second birthday, and I don't know how many more times I can throw my hands in the air and say "Landsakes, my baby is 2." Probably at least one more because landsakes. My baby. He is 2, you know?

Today, Bomma sent Harry a Toys R Us gift card. At first, Harry didn't know what to make of it, but then we explained that it was his money and he could buy any toys he wanted with it, he (like his mom) quickly appreciated the awesomeness of the gift card. He ate lunch with it clutched in his chubby pizza and plum-stained fist, and as I carried him upstairs for his nap (usually he walks on his own big feet, but today he drifted off mid meal like he used to when he was a baby) he lifted his head from my shoulder and said "Wait, Mama. Harry's card." I wiped it off so he could nap with it, and when he woke up, we went straight to the store. He didn't even want to stop for a latte-- marking the first time ever that he refused (politely declined, really) a latte.

He took his time surveying the store. At first, he claimed to be searching for a bus. The only one we could find was a Little People bus, but he said, "No like this bus, daddy. No like it," and kept walking. 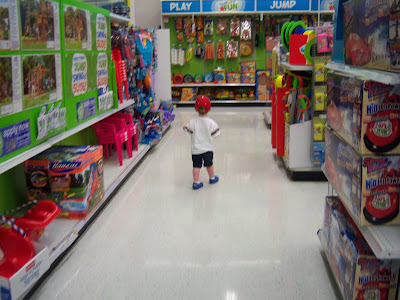 He almost wanted this crayon, but when he discovered that it didn't write all over the floor, he lost interest. 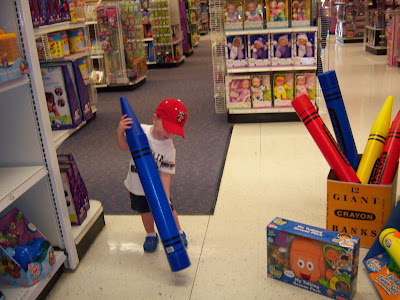 Then he stumbled upon the licensed character aisle and found this-- a talking Diego Rescue Pack. He said, "Need this, Mommy. Need this home," so we put it in the cart. 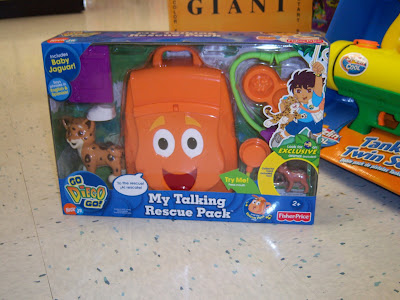 He stopped by the bike aisle, and we were so excited that he liked this particular number because it is currently wrapped up and waiting for him at home. 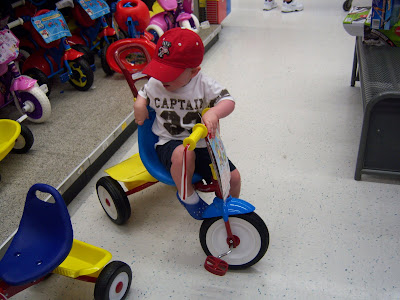 Clearly, he also needed a handful of trucks. 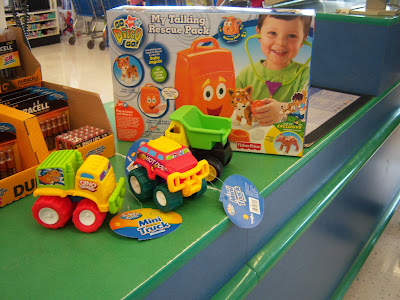 And also a few rides on this thing. 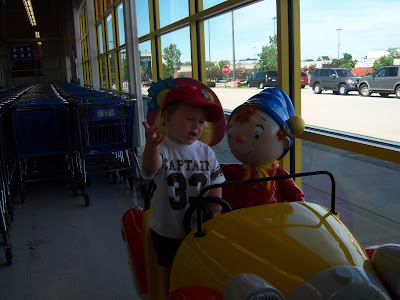 So even though we got a cake for Harry's party, I wanted to make sure he had some form of cake to eat for breakfast on his birthday (yeah-- it's a tradition), so he and I made cupcakes. He took a nap, and I frosted them and tossed a few M&Ms on top, but I thought Harry might like to try his fat hand at decorating when he woke up, so I saved a half dozen for him. Here's the video:

SO CUTE!!! What a big boy. Two looks like fun... except for the cooking of endangered species of course. We do cake for breakfast on birthdays too. Even mine! It's a great tradition, isn't it?

that was the bestgift card I ever sent to anyone...he's so smart, and I loved his conversation about the cakes...Happy Birthday Harry, Bomma.

I think it is great that you pick out a present for him that he likes. It is so hard to shop for kids because what they want is always changing.

Love the birthday gift selection trip. Will definitely have to keep that in mind when my baby (ack!) turns 2.

And to mom and dad, nice work so far! What a smarty. And opinionated too. I wonder where he might have gotten that?

"Just eating, not decorating!" I love that!

hey i was just thinking about changing my blog to harrytimes.blogspot.com and finally ended up on your blog. say my hello to little harry and he has the same name with me :)

i believe he's gonna be a very nice guy when he grow up (the name tells it all lol...)