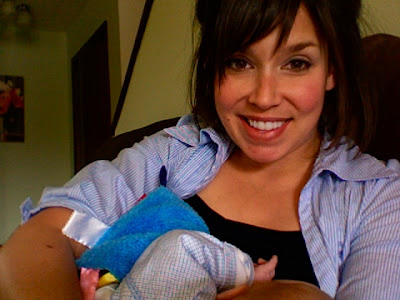 If you've ever thought to yourself (and really, who hasn't) I wonder what Sarah looks like when she creates the magic that is this blog, wonder no more. The above picture taken with the cute little camera in my computer says it all. Although I had no idea my forearm looked so meaty.

Anyway, I have never seen someone leave my house as fast as Harry's awesome babysitter Jamie did today. She spent what I am sure was a pleasant 2 hours with a sleeping Jack while Harry and I ran to the grocery store and the party store for gift wrap before heading to the gym. I have been working out at my gym all week, and it has been wonderful, but I am loathe to bring Jack to the nursery, so scheduling has been interesting.

About 10 minutes before Harry and I got home, Jack started to cry for food, so he was fairly worked up by the time we got inside with all our bags, switched the laundry from the washer to the drier, wrestled Harry out of his "Crocs shoes," and called the HMO to ask about a scary hospital bill we received (by accident-- phew!). Jack's screams tend to freak Harry out anyway, but when he realized we were leaving the gift wrap in the basement, he totally lost it.

The noise-- deafening. Jamie filled up Harry's bup, turned Caillou on, and zoomed out the door so fast she left streaks. I so wanted to go with her.

BUT, I realized that there is one good thing about having 2 under 2-- I have not had the time or the inclination to be so sad that Harry is turning 2 on Saturday because there's too much crap going on. If I had two seconds of quiet in which to think, I would bawl every time I folded Harry's Hanes undershirts or balled up his large socks. Luckily, Jacks yells; Harry whines, and our insufferable weather radio beeps all day.

Also, I know that even though my first baby is growing up, my little baby is still so darn little. And angry. 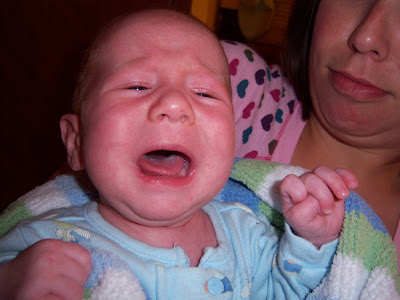 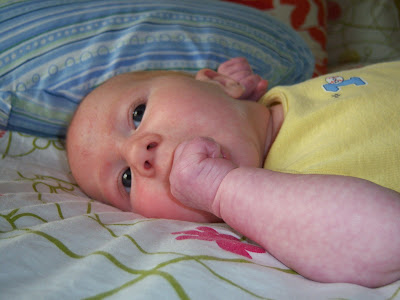 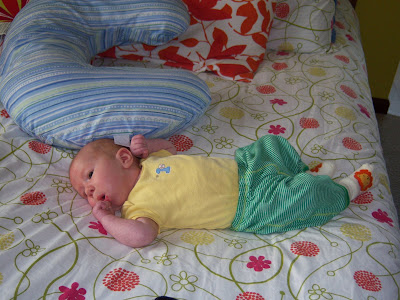 Aww, happy birthday Harry!! I never considered that leaving the house with JUST Charlie would seem easy. Sheesh, I have a lot to learn!

Jack is getting so cute, but I haven't heard him howl...he looks something like Harry but something like Jon as a baby..and you look wonderful....Bomma

This is such a cute video! LOVE seeing Jack so alert and NOT CRYING! He likes his bath so much.
You and Ben are awesome parents. These kids are so lucky, and I think they know it.