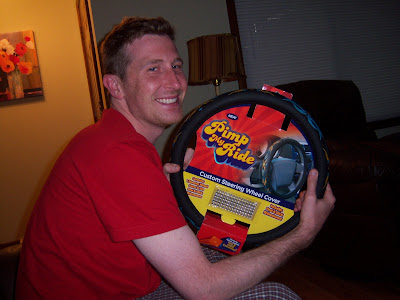 I cannot even tell you how excited I have been to have Ben open his Father's Day gifts. Well, Jack's was kind of lame-- a case for the GPS I got Ben, and the GPS itself turned out to be more annoying than anything else. Sunday afternoon, we went to Trader Joe's for some chicken salad, five dollar wine, and frozen taquitos, but we forgot to tell it that, and the poor thing was doing its damndest to get us home, barking U-turn commands and beseeching us to turn left and then left again every 400 yards. Once we found the volume control, things were better. Then we got to Trader Joe's, and I thought it would be fun to let Harry push his own little cart, and we ended up with 6 yellow peppers, some unidentifiable dried red fruit, a box of Indian Fare rice of some sort, and a temper tantrum, and things were no longer better.

But the Pimp My Ride steering wheel cover that Ben is displaying in the above picture? So awesome because Harry picked it out all by himself. I took him to Target and said he could get anything in the store for Daddy (and really I was prepared to stand by that, but I was hoping he'd avoid the electronics aisles-- still, I figured what the hell, you know?) This is what he chose-- a steering wheel cover (awesome) that came with 100 extra stick-on rhinestones (awesomer) and was on sale for $4.88 (awesomest). He originally said he wanted to get Ben a cat, which I thought was so funny I probably would have bought a cat, but sadly, Target doesn't have any.

Hey! Check out Jack's first pair of Robeez. He is such a dirty hippie. 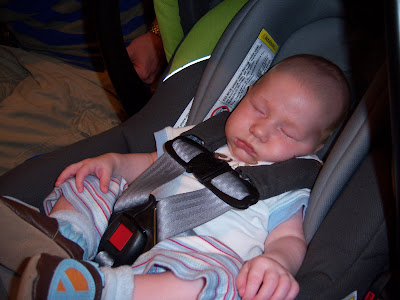 We had a delicious father's day breakfast, and Unc Ben surprised us all by sneaking upstairs to pay the bill (dads, he reasoned, should not have to buy breakfast on father's day). These pictures would have been even cuter if I had zoomed in. But I was carrying Jack, my 10,000 pound diaper bag, Harry's bup, Ben's Cubs tie (a gift from my parents), and what appears to be a large chip on my shoulder, so I didn't have any free hands. 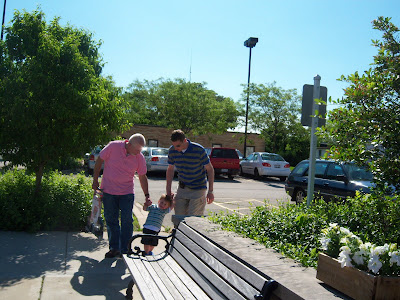 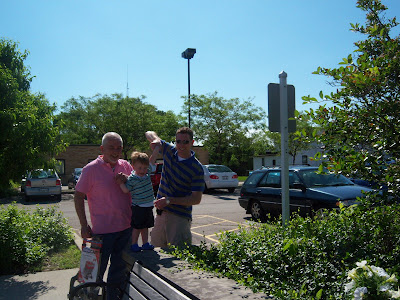 Ben's gift to himself. 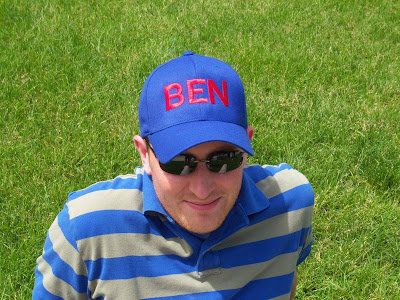 Harry likes riding his bike, but he keeps asking if he can cross the street. Um, NO. Freaking street-crossing Cailllou. 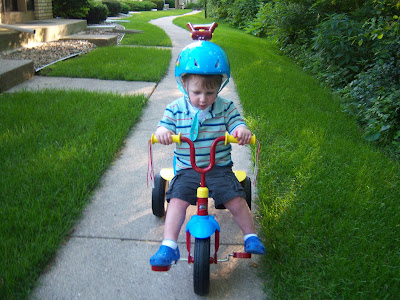 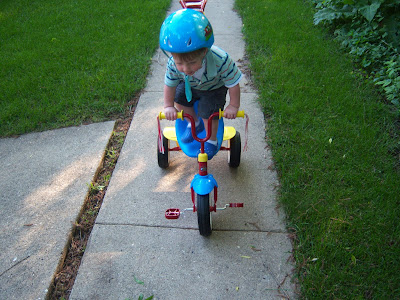