Checked Out, Or Mommy's Shopping List Is Up in Clouds

I suck at grocery shopping.

Ben knows this; I know this. That's why he is the family's designated shopper. I am not usually even invited along. Sometimes, Jack and I will go to Target with a very short list of paper products and baby toiletries that we are instructed not to deviate from while Ben and Harry go to the grocery store three stores down. But, we inevitably spy some sandals, a bag of bulk candy, a few tank tops, some super hero toddler tees, watermelon-printed PJ's... you get the idea. Occasionally, I insist on making food shopping a family affair, but Ben gets a case of the grumbles that gets louder every time I add a bag of yogurt covered pretzels, a chunk of summer sausage, a tray of sushi, you know, essentials.

Actually, I shop like my dad-- many snacks, few meals. Unless a 6-pack of chocolate pudding, a plastic tub of mini cinnamon rolls, and a mushy tube of liver sausage is your idea of a meal. (Also, about that sausage, Dad? We used to let Daisy lick the hell out of it, and then we'd just wrap it back up and stick it back in the meat drawer.)

There was this one time when I was pregnant when I freaked out about the amount of processed food we bought at the store, and I made Ben return an entire trunk full of groceries and told him he had to go back and reshop, only buying things from around the edges of the store. After that, I pretty much stopped going to the store. Was asked to stop going to the store.

Then we had Jack, and I would run in for the occasional gallon of milk (holy cow-- Harry drinks a ton of milk) or bag of Brach's butterscotch candies (which comprise 96% of my daily caloric intake-- the rest is bleu cheese crumbles-- good thing my disgusting food craving stuck around post pregnancy), but doing the weekly shopping by myself seemed way out of my league.

Until today. We spent so much time napping, eating out because we had no food at home, and just generally loafing this weekend that we had no time to shop. And we were out of COFFEE FILTERS, my god, the horror. So after nap, I grabbed Ben's shopping list, loaded up Jack, Harry, and Harry's snacks and beverages, and bravely set out to conquer the grocery store.

I failed. As I was loading the Harry into the cart (while wearing Jack in the Bjorn), my shopping list (which I never read at all) blew out of my hands. I was so noticeably distraught over this that a really nice old lady asked if she could help me in any way, and Harry immediately launched into a diatribe about how my list and his green balloon were together in the clouds. Okay, he is so creepy. He lost that freaking balloon over a month ago. And, as soon as he released it from his chubby fist and started breathing heavily, we got him a brand new green balloon. But still, he would not stop talking about the list and my balloon together in the clouds. Is still talking about it, in fact. Loudly.

I got a whole bunch of random crap, but nothing we needed (Ben is out buying coffee filters and bread right now). Not only did the Bjorn pull my shirt down so far my bra was hanging out all over the store, I noticed on the way out that my skirt slid down below the leg of my underpants in front. So, the good news is I appear to be losing weight. The bad news is I was showing some serious thigh. WTF? Who does that?

Also, I have a strict don't ask don't tell policy about items under the cart. Since the checkout guy didn't mention my case of Ice Mountain, I didn't either. Until I was walking away, and he was all, "Ma'am, you forgot your water."

Pissed about being called Ma'am, I ignored the ethical grayness of my policy and snapped, "Nope. YOU forgot it." Then I had to stand in line again and pay $4.

But on the bright side, I saved $14 with my store discount card; Jack slept, and Harry was an excellent shopping companion. I promised him Hot Wheels cars if he was good, and he was better than good-- he was chatty.

In conclusion, for dinner tonight, we're having steaks, salads, and strawberries. If that is a complete meal it's because Ben bought it on Sunday at Whole Foods. I suck.

Here are Harry and Jo shoes shopping at Macy's. Harry's always so jealous when we shop with Jo because she doesn't have to ride in a stroller! 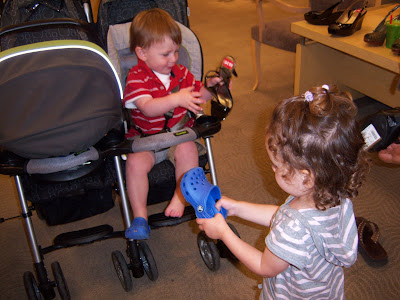 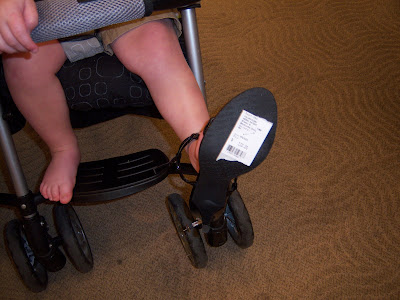 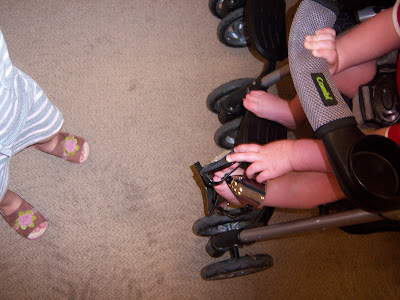 Erica got Jack this shirt-- it says Disgruntled, which he usually is. Also, Harry made a painting yesterday, and when I asked him if I could hang it in my office, he said no because it was for Erica. 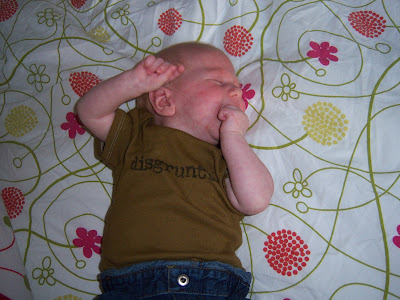 This was a great post. I don't know where to begin! I have been quite the terrible grocery shopper myself recently. But mostly because I now consider a Tombstone and a tube of cookie dough to be a well balanced meal. And I am very preoccupied with hurricane turbulence and trying to keep Charlie from eating all the produce before it can be weighed.

This is funny! So you are only eating things that begin with B today? Like butterscotch and bleu cheese? Is tomorrow C foods? It seems to me that you did this before, about 27 years ago....

deja vu..I took two carts, twins in on ,Les in other seat, Lynne walking beside, and pushed and pulled both til groceries shopping complete..Bomma

Awesome post! I am the same way! I went to Trader Joe's last week and bought all kinds of snacks--lots of cheese, crackers, sesame covered cashews, hummus, pita, peanut butter filled pretzels. You know, all of the essentials. I think I spent $90 and maybe had enough to make one meal. Brad literally hasn't gone to the store (except to maybe buy a totino's pizza when I am out of town) since we got married. Thank god you have Ben because our future children aren't going to have a well balanced diet!

LMAO!! I haven't been grocery shopping in like 3 weeks. I was missing it until this post; now I think I'll make Husband do the shopping...