So the other day, I ran a software update, like I do every other Monday, and something magical happened! I now have spellcheck everywhere-- on the internet, on my desktop-- everywhere! Cool huh?

Sorry no updates lately. Have been very very busy. Which is not true, but whenever I am procrastinating or stuck or just generally frustrated with some aspect of my project, I freak out and stop doing anything because I feel so overwhelmed by the absolutely NOTHING I am doing. The thing is, my chapter is just not coming together like the previous ones have. I still have no argument, I am still puzzled by my primary documents. I have ingested a wealth of secondary literature, and I know what everybody else thinks about Judeo-Christian morality and Planned Parenthood (or, more precisely, birth control/ abortion in general), but I still don't know what I think.

So, yeah. Bummed about my chapter. Bummed about the snow. Joined a gym. Fell down on the ice and dropped Harry. Gained a bunch of weight since my last OB appointment (and don;t go back until January 17th, so plenty of time to gain even more).

Luckily for me and my Scrooge McDuck attitude, it's Hanukkah! Harry learned the word present really fast, and he says it all damn day, like mama, where's my present. Oh! He heard Ben say Jesus (and not in a "somebody has a birthday coming up really soon" kind of way), and he said that for a while. More like cheesus, but still really funny. 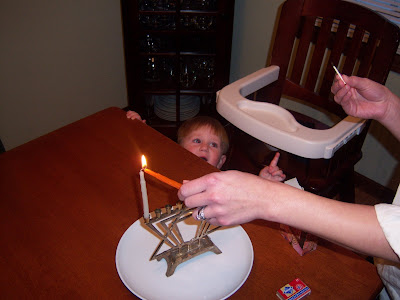 Watching the candle burn (and he tells me no fewer than 6 thousand times a day that the menorah is hot. Also hot? My coffee, the Yankee candle tart warmer in the powder room, our empty fireplace, and the fireplace from which Santa emerges in his The Night Before Christmas book, which we read at least 3 times a day. Also? In that book, Santa wears mittens on every single page, and Harry will show them to you. One "mimmen" on each hand for twenty pages. That's a whole freaking ton of mimmens.) 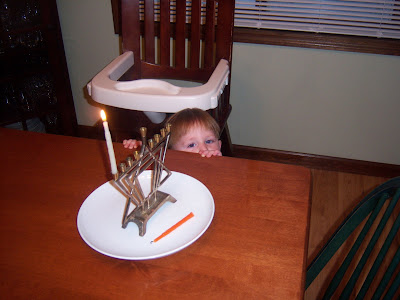 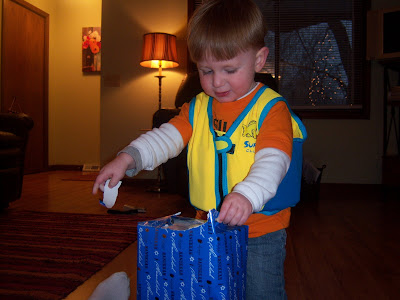 Just wanted you to see that he not only insists on wearing this swim vest all the damn time, he also likes it to be fastened properly. 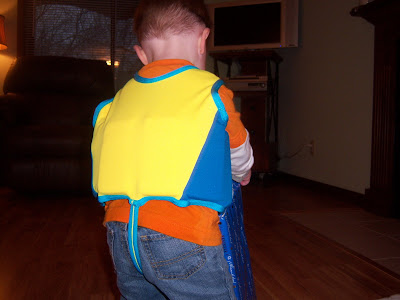 I get you on the stuck and frustrated thing! I feel like I've been there all year. Here's to 2008!

Your third paragraph made me want to come up there and take you out for a peppermint hot chocolate. I hope you feel happier soon!

The swim vest and Cheesus things cracked me up!

Harry's pictures make the holiday complete..waiting with baited breath to hear about his sbling...Bomma

The fun place in Madison is definately a "go!" I'll arrange to have the more comfy car anytime you're free. Next week, week after? E-mail me and tell me what coming days work best for you. I can't wait!

The Gingerbread Lattes are my FAVORITE, but Theo doesn't like us to shop there b/c they outwardly don't support the military. Last week, he surprised me with a huge one though... happy happy happy. He tried to get me to boycott Target, but I just couldn't do it.

I enjoy your blog so much. Hunter loves the vacuum, too. He has a toy one on hold with Santa if he can keep up the being a good baby thing.

Oh! Your holiday card is so cute! I love it. Adorable pictures of Harry.

Can't wait to hear if the baby's a boy or girl!

Doug and I received our much-anticipated Christmukkah card today. Brilliant photos of Harry! Our thanks and love and happy holiday wishes.

Happy Channukah! I love his little face peaking up over the table to watch the candle. Ethan's been standing behind my legs and poking his head around.

How cute is that swim vest? I love it!