He's making his Hanukkah list because he knows the holiday comes on December 4th this year, and he's worried that his parents won't be prepared.* He wanted to check out the Circuit City ad for ideas. He has his eye on a new computer because he's almost ripped all the keys off my old one, but now he's also thinking an SLR camera would render better pictures of him.... And if he had his own iPod he could definitely touch it, lick it, and bang it on the ground-- the very things his mean old mommy won't let him do to hers. 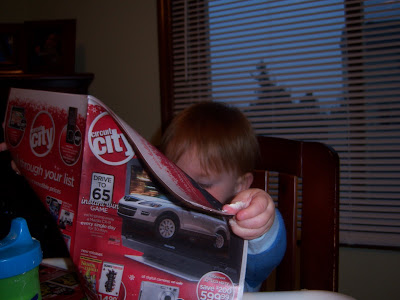 It must be the white beard that makes him look so smart. Notice that it's frigging dark outside, and were already up eating breakfast. Bah humbug 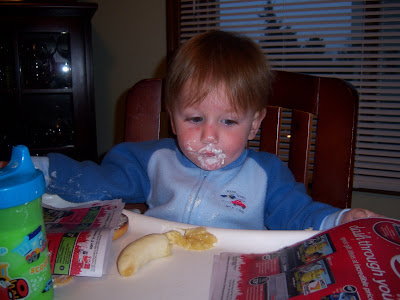 * Harry shouldn't fret because his parents are on their game this year. I wonder if he'll notice that some of his Hanukkah gifts will come in Christmas paper... the very same Christmas paper that Santa's elves will be using.... And those elves? Really bad at corners.
Posted by Sarah at 6:09 PM

He looks like he is reading the ad! What a cute guy!

Tripod should not even doubt he's reading the ad..we would have no one but a genius in this lineup...Bomma