I realized the other day that Harry has quite an extensive vocabulary-- if you know how to speak his language. The key is to remember that most word start with a "B" and end with a "P." No, really, it gets easy after a while.

He can also tell you what some animals say and what noises some appliances and vehicles make, but this is not usually spontaneous. Unless the landscape guys are outside, then he's all "Zhhhhhhh"

And there are probably more, but these are his most common words. If he whines and point to the cupboard, he is really saying, "Mother, can I have a delicious cookie?"
When he grabs his high chair and tried to shake it, he means, "Mommy, will you please feed me, you neglectful idiot."
Also, he blows a kiss when we say I love you.
The trick to speaking fluent Harry is not to expect perfection-- he does not articulate that well, but if you follow these phonetic spellings, you'll usually get his drift. What's really frustrating is when he says what sounds like complete nonsense, waits to see your reaction, gets none, and then repeats the exact same nonsense a little more firmly. This continues until he freaks out and/or you give him a cookie.

Here he is in our bep with his bup. He must have played hard in the barp. 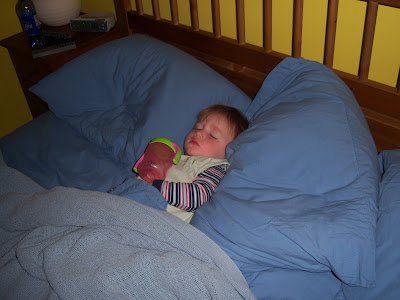 Thanks for the Harry/English dictionary! I like it ! LOVE the picture!

What a sweet picture! I can't believe how many words he says. I guess we should get working on that instead of laughing hysterically when we ask what a dog says and he sticks out his tongue and pants.