Poor Harry is sick! His first official illness. A cold. And fluid in his ears that is not infected but could be soon. We are giving him Motrin and slathering him with Vicks and making sure he sleeps with his head elevated. The urgent care doc we saw said to have him sleep in his carseat or swing, but hello? That is so not who he is. I took him to a playdate (with the most adorable little girl) last Wednesday and got a call from her mom on Thursday saying she had a fever and the sniffles. I thought, "Oh, crap," and sure enough, Harry woke up sick on Sunday. I woke up sick on Monday, and Ben still feels okay. But none of us sleeps much, and that sucks. Oh to have a newborn again. I should have licked the little girl, so my body could make immunities to ward off the illness for Harry. But you just can't go around licking other people's kids.

Since Harry is sick, I bought him a toy (duh). A baby called Busy Little Honeybee, which is the worst name ever. Harry calls her "Ahg?" which is way nicer. When he first grabbed her, I thought he was calling her a no-no, but I realized he was smakicking her nose and saying, "No." How cool is that? So no-no is a thing he can't touch and no is nose. He can also find her eyes, and thanks to Ben, her junk.

We took him to the farmers market on Saturday, and I'll post some pictures of that soon-- no veggies out yet but lots of cookies. Yum. I have a boatload of exams to grade this morning, and I get more papers this afternoon. Oh, the glamour of it all. 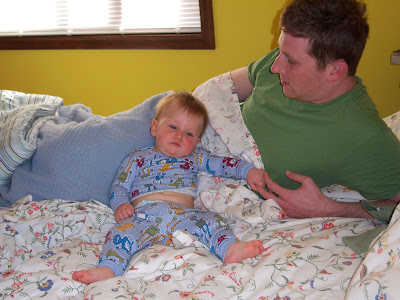 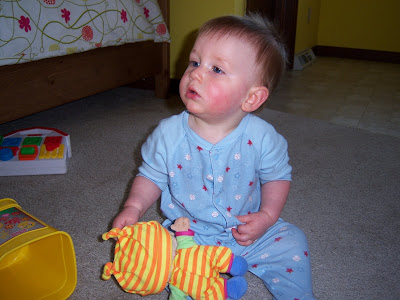 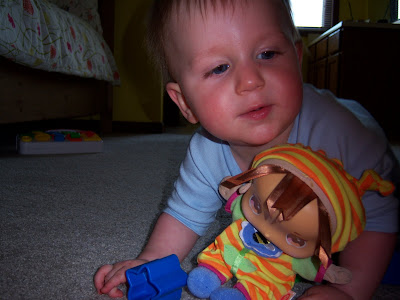 That is the saddest picture I ever saw! Poor Harry. Even his feet look lethargic.

How cute are babies when they are sick? I love the picture of him in bed, all slumped in sickness. So cute. When Ben was 14 months old he got sick for the first time. I bought him a bear three times bigger than he was. My mom used to get me new crayons. Love it. Oh, and yes... we can play anytime. Next week is supposed to be really, really warm. What days are best for you as far as grading, etc? I'm good Wed or Friday.