BEN HAS THE FLU.

(Harry, Cooper, and I are on preventative Tamiflu. Ben is on Tamiflu. Jack and Dorothy are on their own.).

Even a constant rotation of Tylenol and Motrin can't touch Ben's headache or totally break his fever.  He is MISERABLE.  And!  We went to Pekin to visit my mom Friday afternoons/Saturday (and you thought we came empty handed, mom! HA! Surprise! VIRUSES!).

He really didn't feel very well yesterday, and I offered to drive home. He was all yeah right-- like that would make me feel better, which is fair.  So, he drove, and then collapsed on the couch the moment we got home with a 102+fever.  He's basically been there ever since, sans a quick trip to urgent care for a flu test (and a bonus strep test!) and the aforementioned metric ton of Tamiflu prescriptions.

Actually, I had to pick up the Tamiflu today because Walgreens didn't have any last night.  OF COURSE. I was sort of glad to run the errand, though-- I have been doing this thing where every time I go to the pharmacy, I tell the pharmacist something about my dad. Not anything major or that he's dead-- I just make small talk and work him in.  This will only get weird if I start seeing the same pharmacist again and again-- so far, all different.  Today, we bonded about how annoying people who can't swallow pills are-- you can swallow food can't you? She told me that people who can't swallow Tamiflu open up the capsules and dump them in applesauce or yogurt.  THAT'S SO MUCH WORSE.

This is basically the only picture I took: (We also checked out the Illinois state high school speech tournament to see some campers from last summer.) 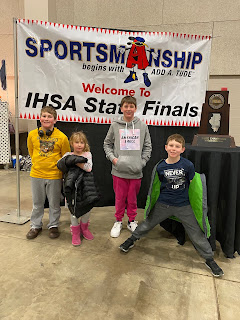 Okay, but before the flu, Ben finally got to take possession of his league's fantasy football trophy because he was the big winner this season.  Look at this thing!  It is a real treat for the eyes: 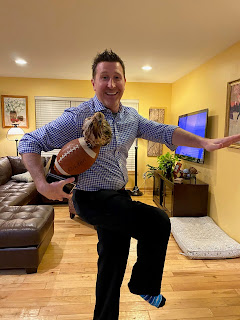 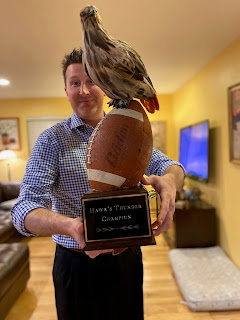