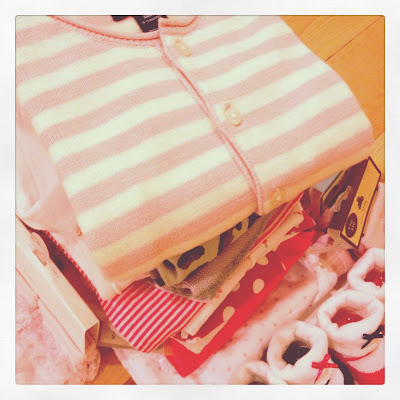 If you thought I was going to get subtle with the pink after waiting THIS LONG to have a girl, you're totally ridiculous.

I will say that newborn girl baby clothes are completely impractical, and it took a lot of digging to find footie pajamas (but the ruffle socks were everywhere, and I bought 7 pairs).

Early in the ultrasound, the tech measured something or other, and we saw a pointed lack of penis. But she swore she hadn't checked the "gender" (this drives me freaking nuts-- people act like gender is a polite way of saying sex, but we're talking about SEX, not GENDER-- although this is all a moot point when you looks at all the pink shit because clearly this baby will perform "female" as long as I have a say in what she wears, which-- NEED TO BUY HEAD BANDS WITH GIANT FLOWERS ASAP), so we both thought may be we were looking at something else.  Then she slipped and said something about "her" leg, but it was so quick that I thought I was imagining things, although Ben did look at me funny.  FINALLY at the very end of an hour-long scan, she pointed out the telltale 3 lines, and I was so happy I almost cried.  (I did immediately feel bad because when she was taking 3D  face pictures I said, "OMG, this baby is totally a boy-- look at that face.")

The tech made us laugh when she talked about people's reactions to the 3D-- you can't always see all of the baby's features, and people have screamed and thought they had an eyeless baby, for example, and demanded she turn off the machine.

To me, she just sort of looks like a Mt. Rushmore face (this is probably because the 3D picture is kind of mountain-colored on the screen and you can't tell what the hell she's next to-- it looks like rocks).  Which would be totally awesome, right?  If this baby grows up to be so important her likeness in dynamited into the side of a mountain? 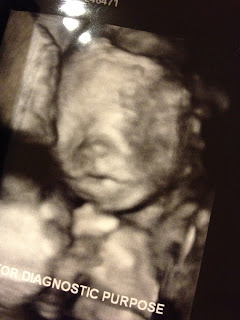 (She has eyes, I swear.  Probably blue ones.)

She looks beautiful from here! Congratulations, you guys!

Seriously. My uterus twinged for you. Congratulations!

Congratulations!
And little girl dresses are VERY practical. So much easier than putting on pants :) Just go with cotton ones during the summer. And if you have to, tuck the bottom back of the dress up in the collar for crawling (or tie it up) :)

The headbands with giant flowers are awesomely ridiculous! You're going to love it. Have you seen the baby crocheted turban things? I'm totally obsessed.

SOOOOO HAPPY FOR YOU! Yay, you finally have your girl :)

Wow, congratulations! I'm sure she'll follow in her brothers' footsteps by being absolutely adorable. Enjoy!

This is completely amazing news!!!! I think she had Jack's mouth. SO THRILLED FOR YOU!!