I got my new computer! It was waiting for me at the office today, which meant I had a MacBook, a MackBook Pro, an iMac, an iPad, and an iPhone in my office. Slightly obnoxious.

It's really big, which I love in terms of the keyboard but kind of hate because it weighs over 5 pounds and gets hot.

On the plus side, I have space to upload pictures again! 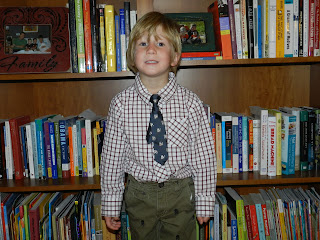 Here's Harry sporting an old lady bouffant, which is apparently what happens when I blow dry his hair, which I had to do because the kids are shamefully overdue for hair cuts.  Not Cooper.  We trimmed his baby mullet after bath a few weeks ago, and he looks normal. 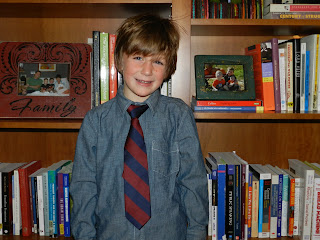 The other two clowns, though, are slated to see my stylist a week from Wednesday, the same day we find out if this baby is a boy or a girl. 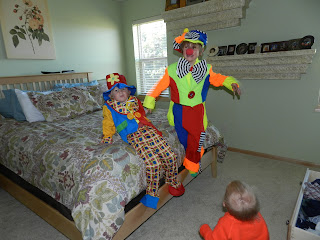 Cooper has been working on spoon feeding. 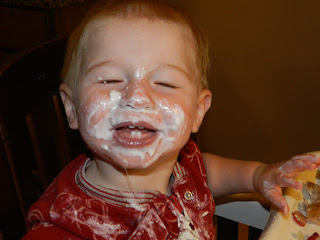 We're feeling good around here.  2 kids in hockey, 2 in karate, basketball and gymnastics and Spanish and soccer for Harry.  In other words, we're busy.

And gearing up for NaNoWriMo and NaBloPoMo-- who's with me?

And the debates?!  zOMG-- can't wait for tomorrow.

The spoon-feeding picture! I love it!!

Cannot wait for the debate. And the associated Facebook smacktalking. So much fun.

I love the Halloween costumes!

Homeland ROCKS. That is all.