I really didn't want to blog about this because it is really just too sad. But since the whole craziness will only last 72 hours, I thought I'd jot it down so I don't forget or do something that stupid ever again.

On Monday night, we got a puppy. A 4.875-pound, fawn-colored beagle/pug mix (I called her a puggle on a pet message board and got flamed to hell and back for promoting a designer brand that causes people to hate regular old mutts and leads to the senseless deaths of thousands of abandoned dogs every year) that we inadvertently bought too young from a backyard breeder. We were too ignorant to realize that you should not buy a puppy advertised in the paper, that dogs should be 8 weeks before you bring them home (not 6), and that people touting "puggles" were irresponsible breeders in general.

Harry named her Sweetie Pie, and you can see why. 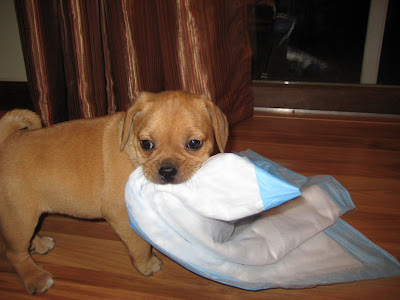 We all fell in love with her 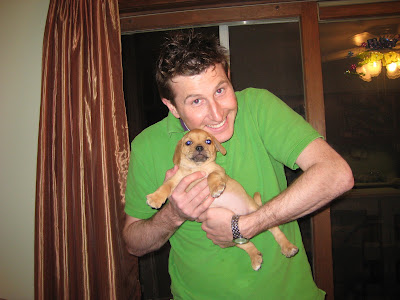 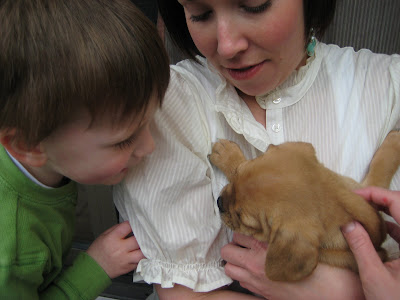 Except Jack, who looked like he wished he had a crate of his own to escape to. 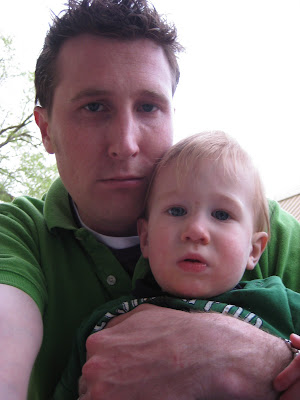 Ben and I didn't even mind getting up every two hours with her while our babies slept through the night-- that's how freaking sweet she is. But we did notice she was having some stool issues. Tuesday afternoon, we took her to the vet to find that she has worms of every kind-- 2 kinds that the kids could catch. The vet told us that given the ages of our kids, the dog's worms and probable future indoor poop accidents, and her extreme youth, we might be better off calling the backyard breeder to see if our Sweetie Pie could go home to her mommy.

Ben takes her home today at 4. I am going to take the babies to Build a Bear and bribe them with stuffed dogs.

Harry is heartbroken, which makes US heartbroken. But I am an owner, he said when we told him she had to go home. But she is so cute, he told us. But I love Sweetie Pie. We told him it was a doggy play date and that Sweetie Pie is sick and needs her mommy and that he'll get a new dog-- which is true. We are on a waiting list for a border terrier breeder in our area who might have puppies ready in October-- we're going out to meet her dogs sometime soon.

Harry thinks it might be okay that he'll get a different dog, but he hopes it has a cape like Bolt this time around. I am glad I don;t have any video of the puppy nipping at his Crocs while Harry proudly leads her around the sidewalk on her red leash.

Surprise your 2 year old with the puppy he's been clamoring for and then take that beloved doggy away two days later? Sounds like top candidate for Mother of the Year.
Posted by Sarah at 2:41 PM

You did the right thing, absolutely.

As dog lover,I still think you did the right thing..I'm still trying to get my courage up to get another one....Bomma

You did do the right thing, but man, that is awful. I am so sorry. Poor Harry! You guys are awesome for preparing him for it in advance. But still, poor little guy!

I agree with Jon. It was the right thing to do and I m not just saying that because I dislike pets!

You made the right choice for the health of your family even though it was really hard. Hopefully you have learned a lot and can find a cute puppy to add to your house soon! Have you looked at the pound?

You definitely did the right thing! Puggles are super cute but can be kind of crazy dogs. I don't think all dogs from backyard breeders are terrible though. We got our dog from a backyard breeder (these people literally lived on a DIRT road) and he is great (super sweet, smart and loves kids). Watch out for some of those people on message boards because they are nuts. One lady refused to sell me a dog because I tried to negotiate with her (the dog was over $1K)! She told me I was irresponsible and not prepared for owning a pet.

oh, that sucks something awful. I'm so sorry, Sarah. You did the right thing, no question.

Maybe you could rescue one? Or even a different breed? Some rescue organizations will spay/neuter and update shots prior to adoption. They also make sure the dog does well with children, other pets, etc.

I am so sorry. We had a couple of very similar puppy disappointments when I was a child (one couldn't stop biting me and I objected to getting stitches more than once in a week; the other was so inbred she was blind by six months and died on my bed before she turned one) and I know my mother felt awful that she had not... I don't know... spent a million dollars and had a puppy flown in from the Daisy Hill Puppy Farms of Arabia. But the dog we loved best and who lived with us the longest actually came out of a cardboard box in the Safeway parking lot. I think it is kind of a crap shoot, so be gentle with yourself.