Cupcakes for the cupcake

Sometime in the past couple of weeks, Jack has become an actual person who walks upright, can express his desires and preferences, and understands us when we talk to him. I am not sure exactly when that happened-- I could have told you the precise second Harry did all these things. 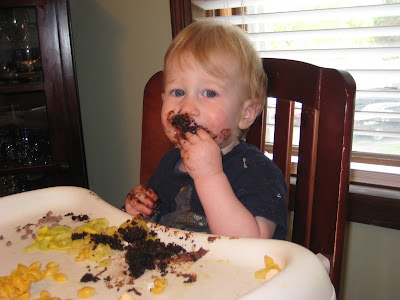 But Jack-- I just sort of rubbed my eyes and there he was-- a teeny chunk of humanity,with the fattest toes and the widest little foot slabs, who raises his little head from the Ugly Doll on which it lays and says "Night night" when we leave his room after reading his bedtime stories. 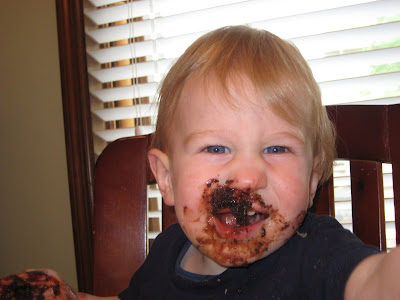 Jack, the wobbly zombie who runs away when we say we're going to get him, can retrieve Harry's pants from the next room when asked, makes the silliest little noise when we tell him to blow his nose, and thinks all animals say "Roar." 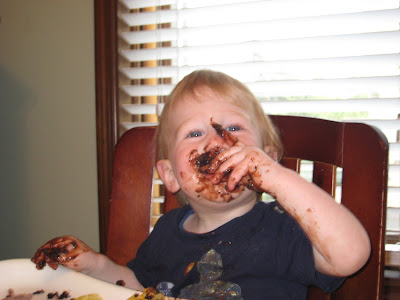 In the morning, if we ask him how he slept, he will lay his head on the floor and pretend to snore (he is very literal, that kid). When asked how HE slept, Harry always shakes his head sadly and says"I didn't sleep good, guys." Jack's optimism, though, is unbridled. He loves when Harry kisses him; when the garage door opens at the end of the day signaling Ben's return, he claps his fat hands and screams "DADA" while toddling as fast as he can to the top-of-stairs gate. He also gives the wettest open mouthed kisses when we request them complete with little lip smacking noises. 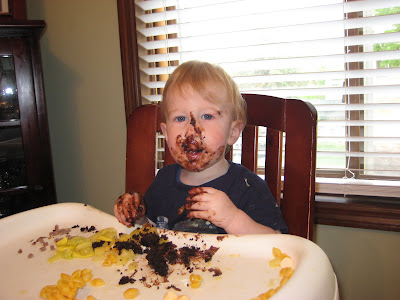 Everyday he gathers new words and figures out how to use them. He's happiest when we're reading to him, and at night, he still likes to be cradled in our arms while we hold his bottle for him, and he sticks his fingers in our mouths.

Trust me when I tell you he is sweeter than chocolate cake and stickier, too.
Posted by Sarah at 8:49 PM

See, you've done a great job on this one too....Bomma

What a cutiepie! I am looking forward to having another toddler around. They are pretty fun.

What a sweetie pie! I love the part about him showing you how he slept.