I am thankful for my babysitter who is coming today so I can get a hair cut and a pedicure and so that I can pick up my Thanksgiving cheese tray and pie without Harry and Jack.

I am thankful that we're attending a Thanksgiving dinner that will have as many kids under 3 as it will adults around the table.

Thanks to Ben or finally installing our new wood blinds (not so much thankful for the snow we can see through the slats, if you want to know the truth)

Thanks to Harry for being such an excellent Saturday morning breakfast date and for looking so cute with a pink cream cheese mustache. I am also thankful to know that strawberry is Harry's favorite color. At Target, I showed him a picture frame I really liked (it was so cute-- had a little string of ornaments across the top), and he said, "Not today, sweetie." Thanks for that, little buddy. Sometimes it's fun to hear myself echoed by a toddler (like when he calls his daddy Ben and asks him to go get things).

Aw, Jack. What's not to be thankful for about your compact 18-ish pound package? Love those teeth, your aggressive amount of eyebrows, the way you sleep cuddled so close to me that I usually drool in your hair. I am definitely thankful for your weird orange-y mohawk. Ha! Also, thankfully, you seem to be in on the joke that is this silly hat. 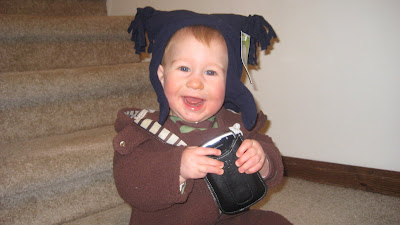 Something Harry is NOT thankful for? Giving instead of receiving. He went totally ballistic at Target when he realized the Imaginext pirate ship was for his cousin Max, not for him. Poor kid. We almost caved and bought one for Harry, too, but then we realized that he'll e getting his own ton of plastic crap for Christmas AND Hanukkah. 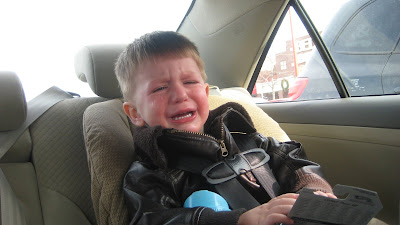 And of course Ben. Thanks doesn't even begin to cover it, but I guess it's a start!

Happy Thanksgiving! Eat too much, and remember to tell everyone a your table how much you love them (unless, you know, you have one of those really big Thanksgivings where you sort of invite everybody, not just family, and you're sitting at a table with people you maybe don't know so well-- then you might want to hold off on any declarations of love, which might be creepy. ).
Posted by Sarah at 6:22 AM

If you don't love someone at the table, you can always say you are thankful that they are there!

Hope you have a wonderful Thanksgiving!

P.S. my word verification is colder - I guess it is probably colder where you are!

Ethan has the same coat as Harry. Toddlers in bomber jacket are the coolest.