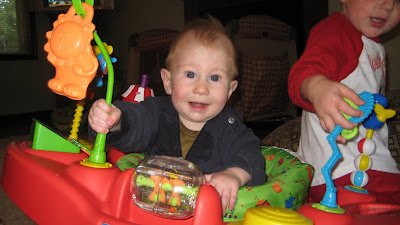 I think if you are someone who does not believe that humans share an ancestor with other primates, then you should look at my baby. Practically a chimp. Also, we no longer have an Exersaucer because someone could not keep his 36-inch self out of it for even a minute and was constantly getting stuck and screaming. Also, that someone can count to ten in Spanish, leading me to revise my earlier position about Noggin being preschool on TV.

Jack is five months old next week, and he has outgrown all of his clothes, and I think he is teething, and I really didn't notice all of this until I realized how old he is. Then all of the sudden, the cascade of drool on his chin/chest/ankles and his 3/4 length sleeves and awkward capris all made sense.
Posted by Sarah at 10:05 AM

Jack looks so happy! don't think he looks as much like a monkey as you guys did! I think he is ADORABLE

So cute!! I think we will need to put the exersaucer away for a while because we have the same problem. It's hard to believe Jack is already 5 months old!

So, I don't think we came from apes, but I won't go there.

He does look cute though! It seems to be that 2-3 yr olds want to get in the saucers - which I think is funny because I wouldn't expect them to want to be confined!

vdvpethank you for the wonderful picture of your little guy...you have the best luck (and genes) for having children that are exceptional...Bomma