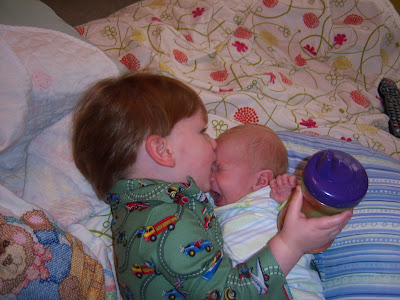 Maybe you could call it tough love? In any case, Jack generally does not object to having his head smacked, his hat ripped from his melon, and his fingers tugged on in an attempt to "off Jack's mimmens." Last night, after we read stories, Harry gave Jack a really sweet kiss on the head (which stopped Jack's fretful fussing) jumped off our bed, and waddled cheerfully into his room, where he climbed into his own bed and pulled up his own covers.

Here they are taking an impromptu morning nap. I was too high on my morning coffee to sleep when they did, but I did gather Harry into my arms and cuddle with him the moment I finished snapping this picture. Sadly, those were the only 20 minutes he slept yesterday. He made mischief in both his crib and his bed for 45 minutes when I finally rescued him, and he smiled sweetly at me and said "Ha! No nap." Luckily Jamie came over in the afternoon, so I napped with Jack until Ben got home. 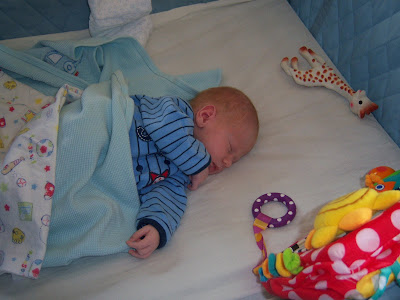 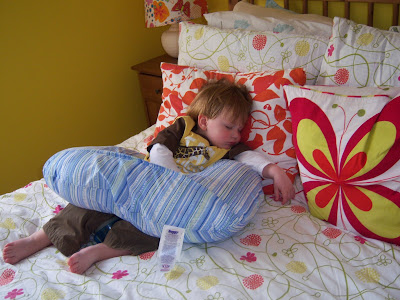 My view of Jack most of the day/night 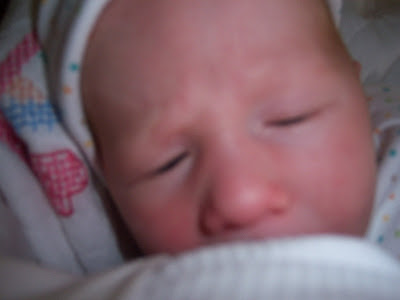 Ooops. I seem to have passed on my fear of storms to Harry-- we're working on it.

Remember when Harry was an infant and all of our pictures were of our brown couches? This time, we're all about the bed. Anyway, here's Lennie in action from this morning-- note his musical repertoire . Also, "Hold Tight" is a song from his Backyardigans guitar (which is another toy that, sadly, lacks a volume control).

HA!! I love the videos! So freaking cute. I laughed out loud at "Ha! No nap!" Sneaky little guy. If only he knew how great naps are. When Charlie starts getting cranky I ask him if he needs to go lie down and he always says "Nooooo" and shakes his head. If I take him up the stairs after that he says "No, no, no, no, no..." But then he falls asleep anyway. Mwahahahaha!

They are s CUTE! I love how nice Harry is to the baby.

I laughed out loud when I read the title to your post. How many duos did I see in high school of that? More than a couple.

Looks like Harry is adjusting very well to the new addition. They are precious together!

We enjoyed your movie clips of the boys...what darlings...Grampa Jack and Bomma

We enjoyed your movie clips of the boys...what darlings...Grampa Jack and Bomma

Too cute! You're not helping my baby fever one tiny little bit, woman!