Harry and I have recently had some major victories that we accomplished all by self, as Harry says,

Harry can put on his own shoes (Crocs-- a total lifesaver, even though they are a teeny bit fugly). He can also walk down the stairs holding onto the banister-- although not always with total success. Yesterday, on the heels of me thinking "Well, tis certainly makes my life easier," as he clomped down the stairs behind me, he fell down the last 6 or so and scraped his back on the carpet. When I go downstairs to reflll his bup or deal with the mound of laundry Jack creates by peeing on everything, a little voice screams "I coming" or "Carry Harry" depending on the degree of independence he's experiencing at the moment. He can also put on his own sweatshirt-- yes, it is upside down, and yes, he wold prefer to wear it that way. 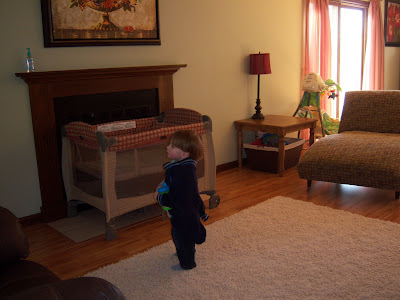 Aren't you loving the decorative bottle of hand sanitizer on the mantle? And no, we're not running a daycare center in the living room, but I could see why you might think that.

I LEFT THE HOUSE WITH BOTH KIDS ALL BY MYSELF!

First, I just loaded them in the stroller and went for a walk-- I have been having dreams about working out, so I figured it was time to start gradually introducing exercise back into my life, and I cannot imagine leaving Jack in the germ-filled gym nursery anytime soon, so walk it is.

Then, I realized that my life would be so much better if I had a Baby Bjorn (we had a carrier for Harry, but it was off-brand and never totally comfortable for us or him), so I loaded them both in the car and went to Target. Okay, this sucked, I am not going to lie. I parked right next to the cart corral and put Jack's seat in the basket of the cart and Harry in the seat. That's when I realized that nothing would fit in my cart because it was so full of kids-- hence my need for the Bjorn, which I put-- along with a jumbo pack of wipes and another pack of newborn diapers (I keep buying the smallest pack because I keep thinking he will outgrow them, and we have #1s in the closet, but he keeps fitting into them) on the bottom of the cart. The whole trip only took 20 minutes, but it took at least that long to load both of them in and out of the car.

Feeling invincible with my Bjorn, yesterday, I braved the mall. Harry fell down a few stairs on our way to the garage, swinging like a monkey as he held onto the banister, bashing his forehead on said banister. Then, I helped him with his left Croc, which made him lose his balance and hit the back of his head on a cold air return. Then he pooped, and we had an impromptu pants change in the laundry room. Finally, as I loaded him in his car seat, I bumped the top of his head on the roof of the car. Poor kid.

Ben met us at the mall over his lunch hour, so I was not totally alone. Also? Not pleasure shopping, my friends. It was necessity shopping (no, Jack did not NEED anymore crap from Gymboree, but have you seen the stuff with the lions on it?). We have a photographer coming over on Saturday to shoot us and the kids with all of our parents for Mother's Day-- which was a great idea 3 months ago, but the reality of my pst partum body makes it a sucky idea right now. Also sucky? Guess who got visited by the post partum acne fairy? Yeah. And she threw in some back-of-the-arm bumps for an added bonus. I refuse to buy clothes with numbered sizes at this moment, so shopping was difficult-- especially since I was shopping with a baby attached to my person and couldn't try anything on.

Shopping thrilled Harry as usual (even though he did get to ride the helicopter in the food court, which he calls Harry's helicopter. Also, Harry and Ben went shopping for my upcoming 30th b-day last night, and Harry rode the helicopter-- and the bus and a couple of cars-- like 4 more times because Ben is a saint. And apparently carries an awkward amount of quarters on his person.) 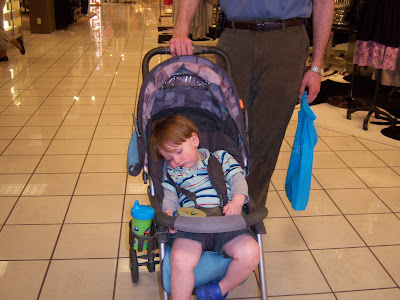 Me and jack-- he looks fake-- like those creepy robot babies in License to Wed. 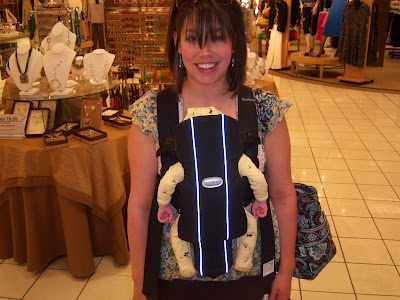 Poor Harry's head! Newborns do sound like cats. We used to say to Charlie "Do I look like a cat to you?!" from Super Troopers.

Oh my goodness! You are too funny!

another way to brighten our day...love the narratives and pictures....Bomma and Grampa Jack

I laughed out loud when I read about you trying to get out of the house! I guess that's just the way it is. I forgot about that part.