In Which Everyone Sleeps But Me

This is what I found last night when I came down from the shower. 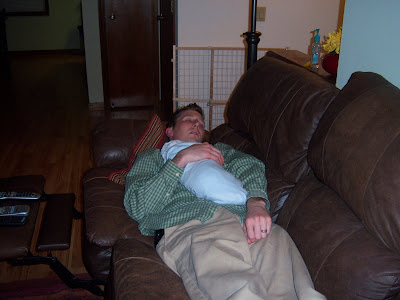 Harry sleeps on the couch when he's been out late-- he tries not to wake us up when he stumbles home wasted. 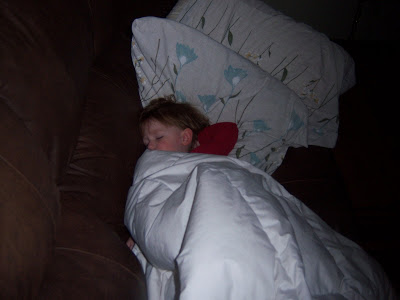 Actually, Jack was not sleeping here-- he was blinded by the stray sunbeam that I thought he might like. Ooops. 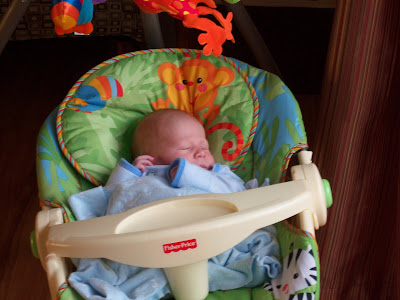 When Harry was teeny, Ben and I were really into Curb Your Enthusiasm, and we loved the episode with Wanda Sykes and Krazee-Eyez Killa. We started calling Harry Krazee-Eyez because he would be up staring at us all night long. Yup. Jack does that, too. Also? Not only do my babies not look like me, they also are not like me, in that they do not like chocolate milk-- or chocolate in breast milk that is. I ate most of a chocolate chip cookie from Noodles last night, and Jack was a wreck-- he spent the whole night grunting, pooping, crying, and staring. 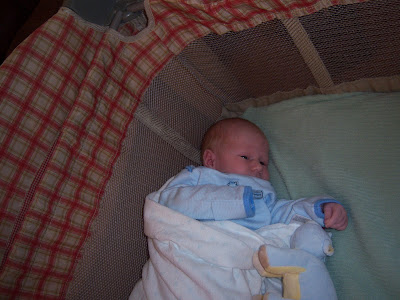 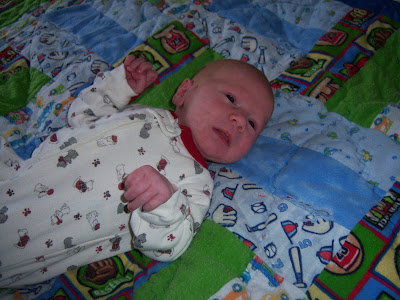 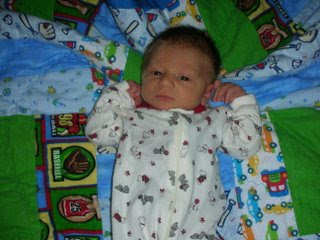 Have you ever had one of those days where your toddler watches Sesame Street at both 7am and 10am? Yeah. Having it.

Also, Jack has not napped all morning. The problem is he eats THEN poops like 10 minutes after drifting off to sleep. If I change him, he's totally awake and grumpy until it's time to eat again. So, I just put him down with what I suspect is a poopy diaper, but jeez. Get a rest, kid, and give us one, too, you know what I mean?

I am finally done with my handy dandy make-me-a-freaking-wet-diaper-counting-psychopath March of Dimes breastfeeding log. Jack weighed 7 pounds, 10.8 ounces at his 2 week check-up yesterday-- almost a POUND over his birthweight (and the expectation for breast fed babies is that they reach their birth weight by 2 weeks)-- so I can finally relax about feeding him. He doesn't go back to the doc for 6 weeks (although the doctor expressed doubt that we could stay away that long, even though we assured him we are much cooler this time around), and my goal is to chill the eff out about breast feeding and realize that it's great. I know the March of Dimes means well, but counting wets and solids starts me down the road to post partum depression. I would pay a crap load of money for a device that could calibrate my breasts and tell me how much he eats (and no, I don't want to get a scale and weight him before and after. I m trying NOT to pass my eating disorder on to my kids, thank you very much). But yeah, I still worry. I am not engorged or leaking milk anymore, and even though it's much more comfortable this way, it freaks me out a bit-- even though I know it should not.

Enough about me and my breasts-- which, by the way, Harry calls my bups and pokes really hard in an attempt to turn them on. Katie told me yesterday that I need to update this blog more often, to which I replied "I need 2 hands for that!" but I am going to try, even if it means Jack occasionally naps on his tummy (is the Back To Sleep campaign a conspiracy to make women so crazy with sleep deprivation that we'll not notice the sorry state of healthcare, welfare, and daycare in America? I think it might be).
Posted by Sarah at 9:44 AM

thank you and thanks also that the boys are probably not going to be carbon copies of each other..makes it easier to be an individual in the family..I do love both the pictures and your narratives...Bomma

The sleeping pictures are so sweet! I also would pay to have some kind of calibration equipment hooked to my boobs. Although in the early days poor Charlie had to drink from a fire hose and grew like a freaking weed, so I didn't really have much cause for concern. It sounds like you don't either!

Anonymous said...
This comment has been removed by a blog administrator.
2:35 PM

Don't you ever want to look at the doc and just invite him in the nicest way possible to #$@% off? Sure, he and the March of Dimes mean well. But as I understand it, women were breast feeding their babies for, I don't know, tens of thousands of years before wet-diaper-counting psychosis became all the rage.

Guess this is my characteristically snarky way of urging you to trust yourself, your baby, and the bond between you.

Well, and venting my rage at doctors. :)

Although sleep deprivation is not something I look forward to, you are handling it well. You sounded genuinely chipper on the phone. Perhaps it was the news? Anywho, the boys are awesome but where oh where are the M or S genes? Those J's have genes of steel! Wow. Now Ben has two mini me's.