This was SUCH a Monday-- and Happy Birthday, Beatrix!

Ben had an in-service all day, so I got to experience the joy that is early dismissal Monday, when the big kids come home at about 1:55 and DESTROY the peaceful afternoon slumber we have going on.  Usually, you see, Ben stays home on Monday afternoons.  But I am ALL DONE WORKING, so I was with the kids aaaaaall day, and I hope this was not a preview of how Mondays will go for me in the fall because Ben has a later class, and he won't be home until like 3:00 in the fall and I will have to HAUL ASS to campus for my 4-6pm meeting.

The morning was fine-- a little chaotic, but I am used to the morning being my time at home, so it was OK. I got like 2000 steps and worked up a sweat getting the boys out the door, Cooper and Dorothy dressed, the kitchen cleaned, beds made, and myself in workout gear.  Dorothy and I took Cooper to school, and then we took a 6,000-step walk to a park sort of by our house.  But Dorothy fell asleep in the stroller on the way there. And then when we had been paying for about 1800 steps, she shit herself so extravagantly that it got all over her jeans and sweatshirt, and we had to job 2,000 steps home for a change.  I also had to do some work stuff before getting Cooper.

The three of us came home and I did assorted housework, made lunch, and put them down for a nap.  Which, OF COURSE Dorothy didn't take because of the stroller thing. (But she stayed in her bed because seriously you guys.  I NEED THAT NAP).  I was just barely out of the shower with wet hair but cute accessories when the boys came home punching each other and screaming about their (terrible) talent show act that goes up for audition tomorrow.  They woke up Cooper, but I kept Dorothy in her crib for 15 more minutes while I washed lunch boxes, went though back packs, straightened my hair, etc.

In that 15 minutes,  Dorothy took off a poopy pull-up and smeared it everywhere.  She had a shit mustache, even.

My reward for cleaning all that up and putting ALL of her bedding and eleventy billion stuffed animals in the wash and bathing/changing Dorothy was a trip to 2 libraries and an ice bream parlor with all 4 kids.

Good news:  everyone flamed out early, and I am nicely tipsy.

Also, IT'S BEATRIX'S BIRTHDAY!!  The best dog in the universe is 1 today!

Harry and Dorothy and I went to the same park yesterday, too, but we took a 4,00-step shortcut. 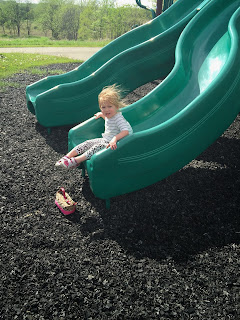 It has fun toys! 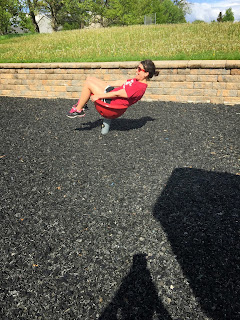 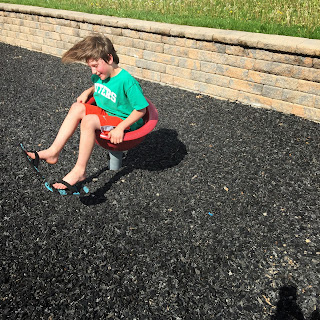 Here we were today.  It was cold. 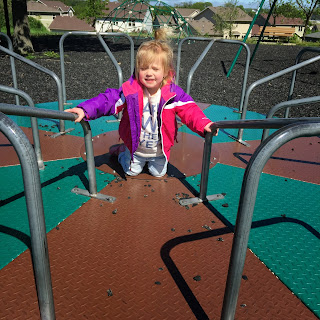 OH MY GOD, HE WORE THIS HAT ALL DAY so seriously. 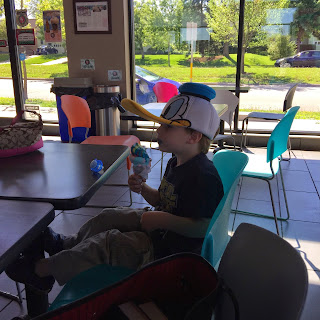 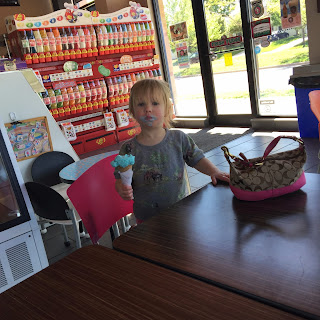 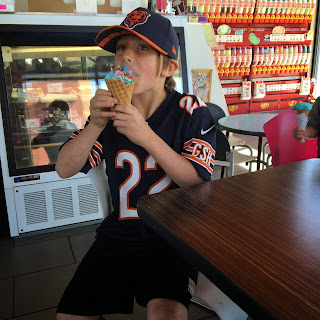 I did not take a picture of Jack, apparently, but I took 2 of Dorothy. 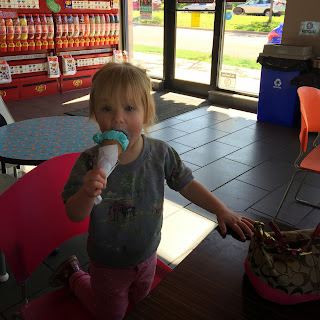 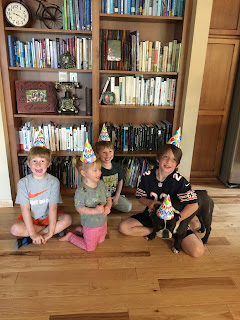 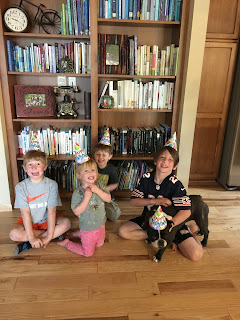 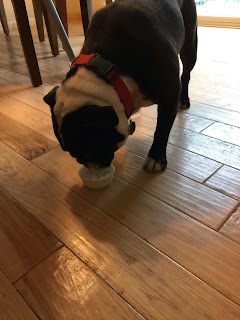 You guys, she is the sweetest, most laid-back dog in the world, and we love her so much!  She is no trouble-- she loves to loll about in the sunshine all day, then binge eat at night and pass out in her bed or on the couch until Ben puts her to bed where she sleeps until 7 or so.  Then the boys walk her, and she starts the whole process again.  She's wonderful.
Posted by Sarah at 10:17 PM

Am I the only one who was hoping for a picture of the shitstache?

Oh the shit mustache. I can just imagine the horror.