Harry cracked me up this weekend.  We were freezing our faces off at his soccer game (not Ben--Ben was at home looking like this while he installed an attic floor so we could store more of our multiplying shit somewhere besides the basement and garage: 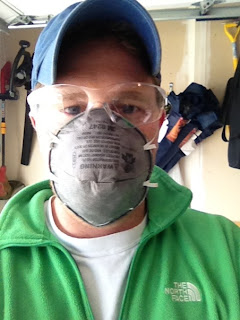 And Cooper stayed home with Ben to nap), and Harry was the only kid on the team without a hat and gloves (because sweaty Ben told us it was not very cold out, so H wore shorts and fleece, and J and I each had on jeans and fleeces and were MISERABLE).  The coach's wife asked Harry if he would like a hat because she had an extra in her bag, and he said, "No thank you.  I don't want to gt head lice."  SO AWKWARD.   Then at the grocery store later, he came up to me brandishing a piece of cantaloupe on a toothpick.  "I want you to know I am eating this sample," he said.  "So if I get listeria you'll know what it's from." HAHAHAHAHAHA!  He also does this hilarious thing where he confuses his "f" and "th" sounds.  He speaks AND writes this way, and it kills me.  I love when he writes the word "baf," for example and when he says he is in "thirst grade."  The other day, I got some story starter cubes-- they are these huge foam dice that have writing prompts on them, and Harry likes to roll one and write a few sentences in his journal.  Last night, he had to start with the sentence, "I like math because," and he was writing all about how "maf" is "thun."  I know I should help him learn the correct sounds, but it slays me, so I can't.

(BTW, we are going to teacher supply stores for activities and writing at home evreyday because there is still no evidence that he is doing anything like that in class, even though his friends in other classes are having spelling tests and generating their own sentences with weekly vocab words.  So, we're doing all that at home, and he loves it so far.)

Let's see... we are probably the worst parents ever because it just occurred to us that we do NOTHING educational with Jack ever, so we decided to see how he is at writing his name. Um, well, he can write it, but let;s just say he needs to work on technique.  On Facebook, I got tons of great suggestions for increasing his fine motor skills, and at the teacher store, we snagged some cool dinosaur lacing cards, a therapy ball he can squeeze to strengthen his hands, some neat pencil grips that seem to help him hold it more firmly.  AND we got the most awesome modeling clay EVER.  I am buying this and only this for the next slew of birthday parties we attend-- it is so cool, and it does not make a mess.  IT DOES NOT MAKE A MESS.  People, that is HUGE for someone like me who hates moonsand with a bottomless passion.  It's called Bubber, and despite the dumb name is so, so, so cool.  I am going to have him pick pieces of rice out of it with tweezers tomorrow, and today, he is cutting it up with scissors.  I definitely played with it after the kids went to bed last night. 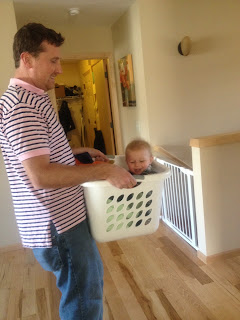 Cooper is in a big helper phase.  He loves to throw stuff in the garbage (that's where I find my shoes, typically).  He loves to help with laundry, and he climbed right in the fridge today to help me pack my lunch (I packed 2 lunches, actually-- a PB&J, an orange and some carrot chips that I just ate, and a tiny bagel, a yogurt, and an apple to eat later.  And an orange and a cookie JUST IN CASE).  Clearly he thought I needed to be eating a salad. 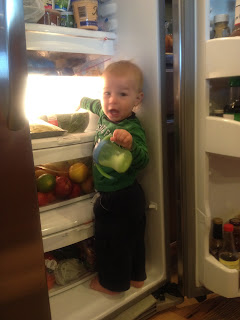 All three kids had a blast playing with this old pop-up playhouse I found in the basement after Ben hauled a half-ton of stuff to the new attic storage  We bought this thing right before I had Jack, and it is still a crowd pleaser.  I was worried that Cooper would get roughed up, but Harry and Jack save their true savagery for when they are alone.  Like last night in the backyard where they were playing after dinner.  Ben was in our room folding laundry with the windows open to supervise.  I heard him say, "Oh, you're bleeding.  Maybe you better come in," and then in tromped Jack bleeding from the EYE after Harry hit him with the soccer net.  He wanted to look in the mirror before accepting ice.  I bet he would have been up for putting a steak on it instead of some organic frozen strawberries, and I think he's going to be our little hockey player. 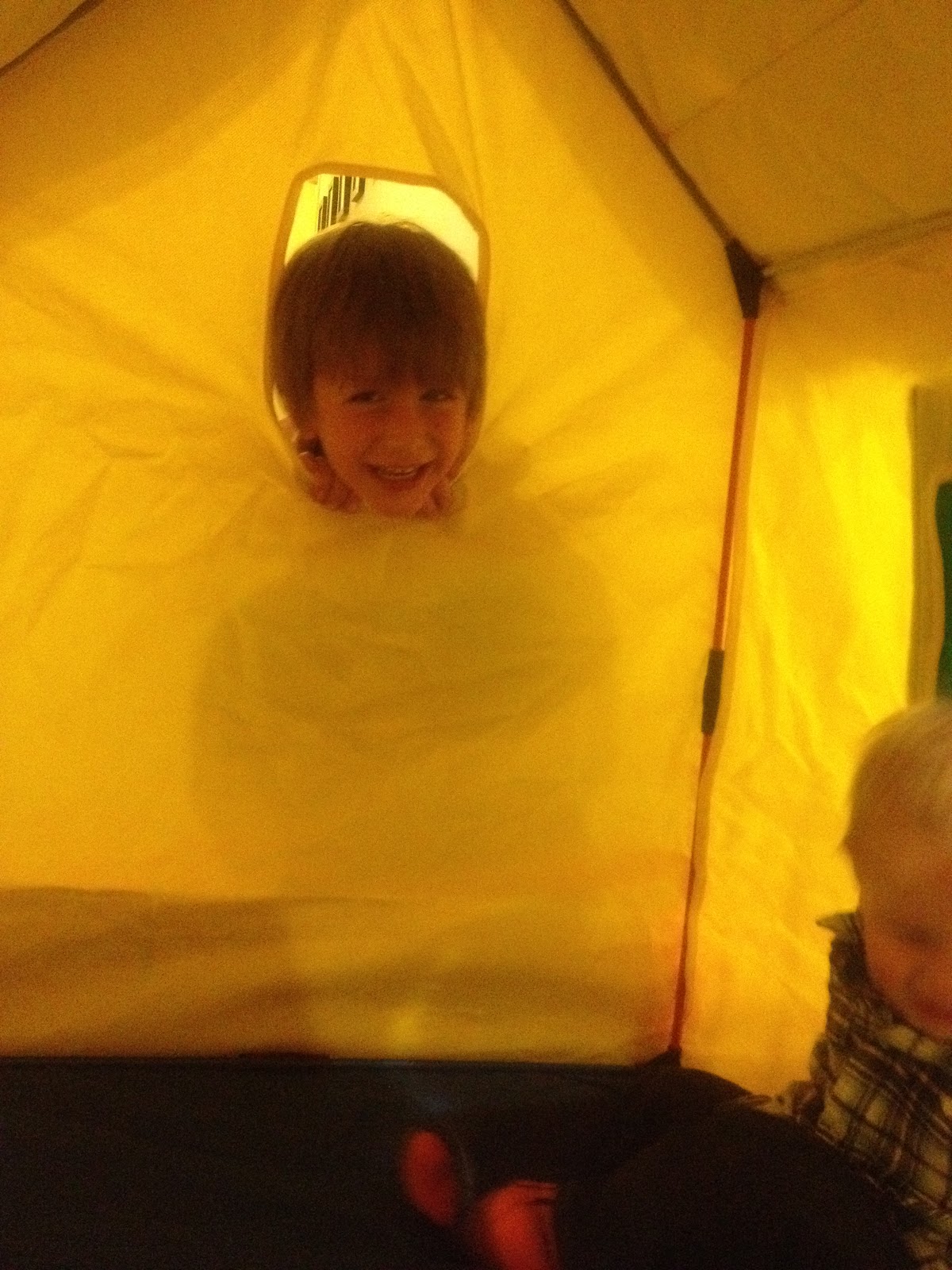 OMG a bleeding EYE? Boys are so rough with each other. I read somewhere that girls hug but boys wrestle and fight. If that's true then mine LOVE each other. Though Wes's most recent facial injury came from his nightstand.

Your lunch sounds so simple and healthy. I really need to stop going to the dining hall.

"in case I get listeria" literally made me snort. I love it!