On September 17, it will be a year since my grandpa Jack died.  This past weekend, the family converged in Des Moines for a graveside service to unveil his headstone as is Jewish custom.  What a lovely custom!  Comforting to mark a difficult anniversary with a formal ceremony and a public acknowledgement that we all still miss him everyday.

The rabbi was a bit late, and the family got restless.  My dad, Ben, and my uncles played an inappropriate game of golf where the object was to hit the ball as close as possible to a lone grave in a roped-off corner-- a place for people with mixed marriages to be buried together. 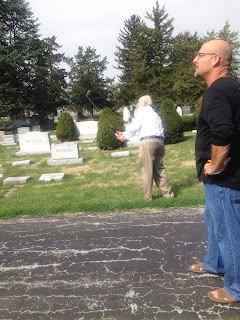 When the rabbi showed up, Jack screamed, "This rabbi is not evil!"  He has rabbi mixed up with another word from Scooby Do, apparently, as he explained to us over dinner.  But he couldn't quite remember the word in question.

After the kaddish, the not evil rabbi asked if anyone wanted to say anything.  The group stood silently until one of my uncles' friends said, "A horse walked into a bar.  The bar tender said, 'Why the long face?'"  This prompted my uncle to say, "This bar has no bathrooms!  It's uncanny!"  You know, just some old favorites.

At lunch after, several people visited the bloody mary bar (SUCH a good idea-- so were the table-side omelet stations), figuring a younger Jack would have been there, too.

Cooper was high maintenance, so I only took 2 pictures. 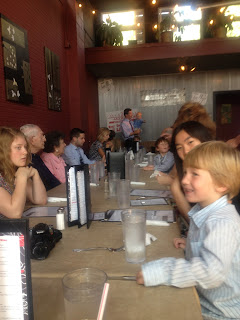 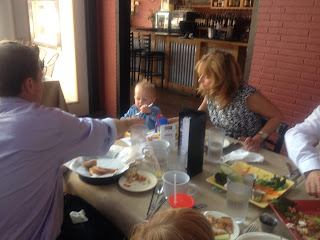 Sounds like a nice remembrance. LOVE the not evil rabbi.

Thank goodness that rabbi wasn't evil. that can ruin a whole unveiling.

Aw, Scooby Doo. Julia is learning much from him as well. :)