Okay, you guys. I am just going to say it. Cooper is an awesome baby. A dream baby. SUCH a great baby. I'd go into detail but I don't want to totally screw myself over.

He LOVES his little baby gym-- loves it!

He hung out like this almost the whole time I made and frosted a caramel apple cake that I pinned and then actually MADE (it kind of sucked, though. the apple cider icing had 8 CUPS of powdered sugar and was too, too, too sweet even for me). (note the abandoned stool-- Jack was helping. the most helpful thing he did? leave the room for a minute). 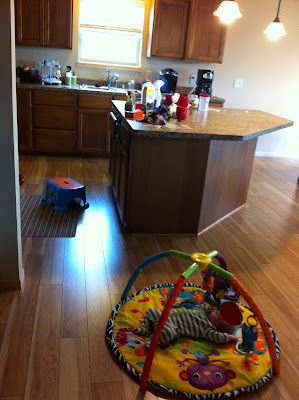 He always looks really interested in the gym, too-- the toys, the mat, the yellow circle on top-- he loves it all. 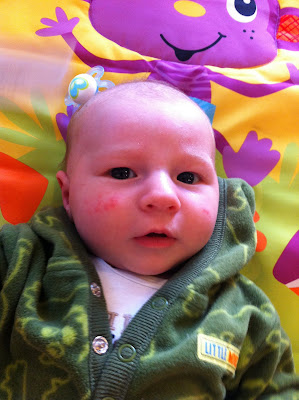 In his quest to once again be the baby, jack likes to take a turn in the baby gym. Here he is demonstrating the finer points of tummy time: 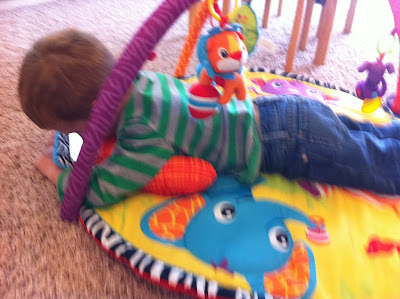 Cooper does not get to spend as much time on the floor as I'd like him to and as he would probably like to because his big brothers are SUPER FREAKING DANGEROUS around his spongy little baby head. (look at Jack) 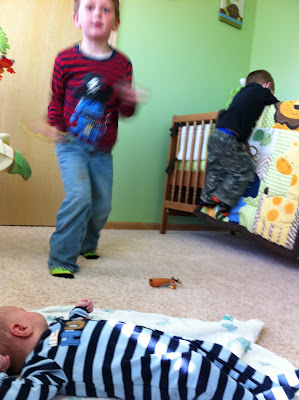 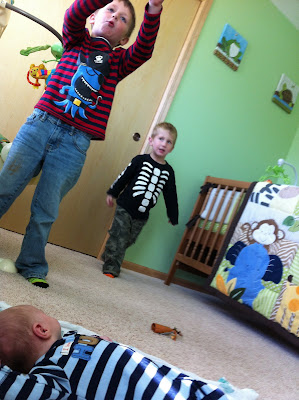 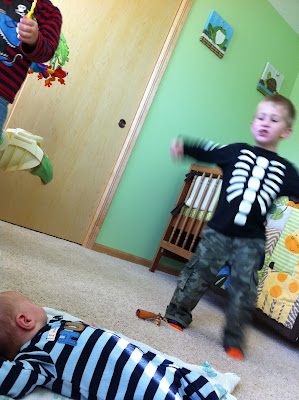 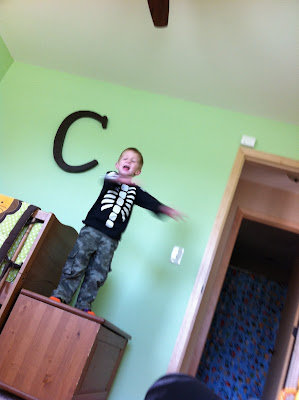 We did some home improvements this weekend. Ben finally hung up his favorite baseball, football, basketball and hockey cards in the basement, and he has big plans to mount some autographed balls, too. We even put up (sports) pictures in the downstairs bathroom. We also rearranged some furniture in the guest room, but that was more like a home unimprovement-- it looks like hell, but now we have room for our elliptical machine to be delivered. (seriously the whole room is crammed into half the room, so we have plenty of room for the machine). I let my gym membership lapse and was reluctant to join a new one because I can't really take Cooper to the daycare during cold and flu season. So, we decided to try working out at home. I'll let you know how it goes.
Posted by Sarah at 9:29 PM

Haha, poor Jack. We had about a week recently of Wes lying on the floor sucking his thumb and refusing to walk, saying "I a wittle baby" and demanding to be carried around. Charming. Once.

We loved our baby gym! Then the big kids took it over. Like everything.

Julia is already pretending to be a baby. Sometimes we have to feed her at meal times.

I enjoy how Cooper is staring at the boys as they run amok around him. :)

you will have to watch or he'll really be a bouncing baby boy...Bomma

Sophie spent her first 6 months on a bouncy chair on the table way in the corner of our old living room where the other kids couldn't get near her. Every time I tried to put her on the floor they would literally lay on top of her. It was out of absolute love and worship but still, suffocation is suffocation.