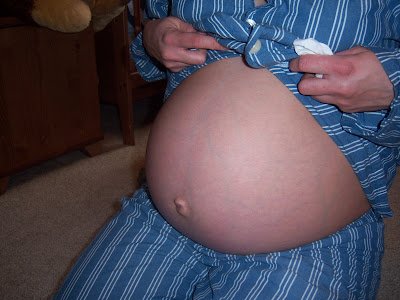 I didn't make it quite this far with Harry. I had him at 37 weeks and 1 day, and I am 37 weeks and 4 days now, so every day I think I am going to have the baby, but so far, no McLovin. I thought I'd post all the pics on my camera, though, because they are going to be out of date when we are no longer a family of 3.

Ben and Jerry's-- what else is there to say? Note that Harry ate an entire cone-- this was just his "drip cup." The other day, I was such a pregnant stereotype. I drove past my favorite custard place (and that's something that I love about this town-- there are several custard places to choose from-- enough to have a favorite among them), and the sign outside announced that the flavor of the day was chocolate peanut butter. I almost killed myself cutting across traffic because that's MY FAVORITE FLAVOR! 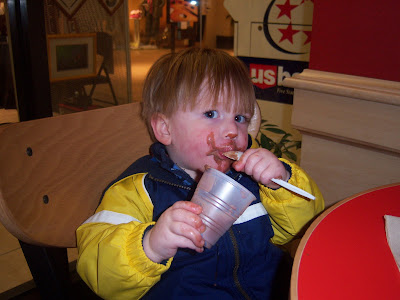 Guess we got a little overzealous cleaning up the blocks 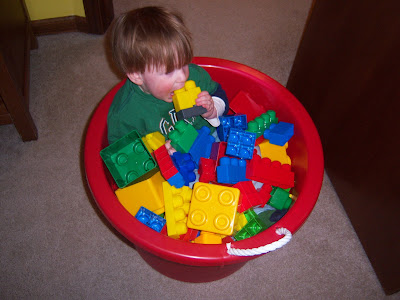 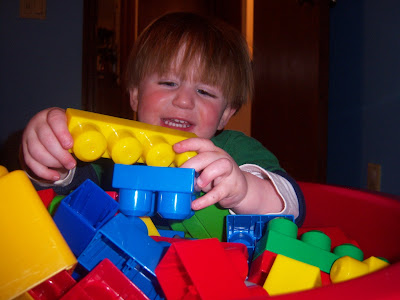 Harry after bath-- he smells good enough to eat, trust us. 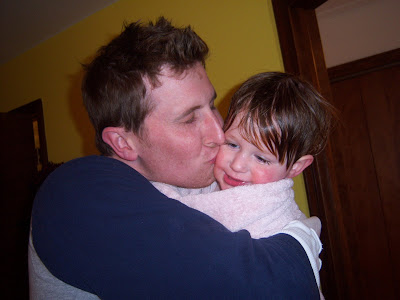 Since I am more pregnant than I have ever been before, I have decided to stop wearing clothes and only wear small (oh, who are we kidding-- large) tents. And I think at least 7 pounds of my pregnancy weight have gone straight to my face. Can you gain weight in your nose? Because I think I have. 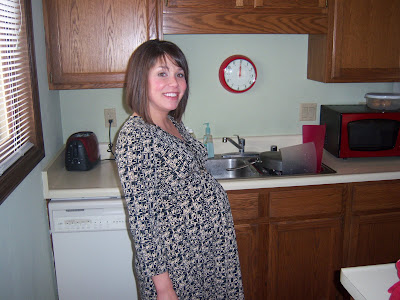 Speaking of freaking huge, Ben and Harry came to the doc with me again this week, which meant I had the unbelievable luxury of leaving a urine sample in peace-- 2 weeks in a row-- no way! And I totally let that freedom go to my head and spent a minute or two fixing my hair in the mirror after I was done and forgot to PUT THE LID ON THE PEE CUP, how gross am I? 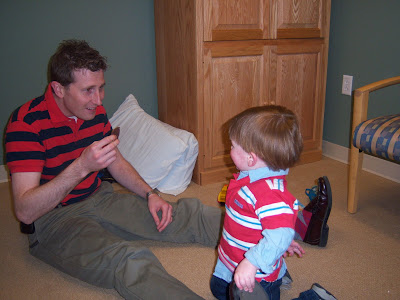 I spent 20 or so minutes on the monitor because McLovin's movements have slowed down dramatically. Because he's run out of room, duh. I asked if we could see about "getting this thing out of me," but the doctor thought I was kidding. Ha ha. Let's evict this kid before mommy gets stretch marks, what do you say? 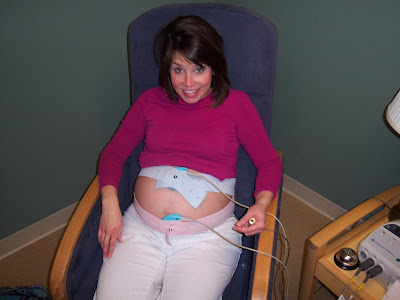 This is easily one of the studpidest things I have bought lately. Or maybe not because he loves it so much. The other morning he saw an airplane on the news and started saying "Airpane." And didn't stop saying it until I said we could to Target and he could pick out any airplane he wanted. He perked up and said "Yellow. Blue," but I told him he may not be able to find a yellow or a blue one. I was thinking a smaller airplane, really. Luckily, Disney had Harry in mind when they made this. With no off button or volume control. The bastards. (And seriously, I hate to buy licensed character crap, but my hands were tied. I said "any airplane you want" because I am a SUCKER). 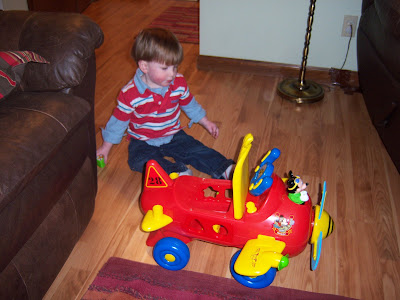 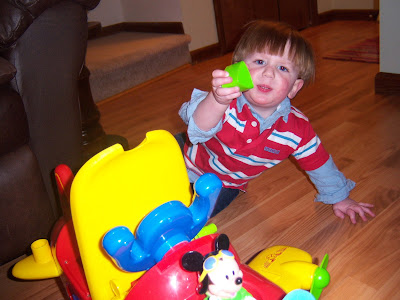 This was a very involved game that consisted of pulling every single Leap Frog magnet off the fridge and putting them in a pitcher, where they became ice, floating in imaginary juice. Wicked fun. 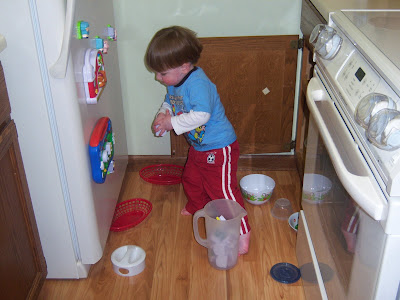 Maybe it's because he has the same hair as Danny Torrence (and no, he won't say Red Rum, mainly because he ignores the color red entirely, which makes me think he may be color blind because he loves yellow and blue), but Harry has been creeping me out lately when he rides this car. He is really focused, and he goes really fast (in his mind-- you can just tell), and he shakes the steering wheel really hard. It's very "Rocking Horse Winner" of him. I need to get a racing form. Or start reading him some DH Lawrence. 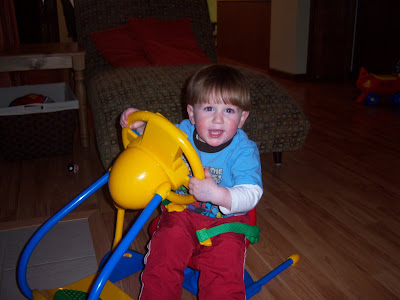 Hey, did Harry get his hair cut? It looks great. So do you, by the way. I don't think you look fat at all, but that one dress kinda makes you look pregnant!

Come on McLovin, time to go! You look great! And Harry is cute as always. Good luck.

I love when the boys give me a minute to read you whole blog... you crack me up. Your grocery store story put a smile on my face I don't plan on wiping off any time soon. I threatened Theo that I'll grow the kids hair out while he's deployed; he won't hear of it in his presence! And that Easter blizzard did suck. I keep poppin' in to see McLovin has made an appearance yet. I'm excited for you. I was nauseous (sp?) twice yesterday which got me worrying... two's wild, but three might just kill me. I can't wait to meet the new little one. It's been too long. If you're up for it, we can come play up in Madison anytime? I can chase Harry for you... Miss you!